In this post some Royale images which I haven't associated with themed sets although they may well be part of them. Today's group features men restrained or readied for punishment. 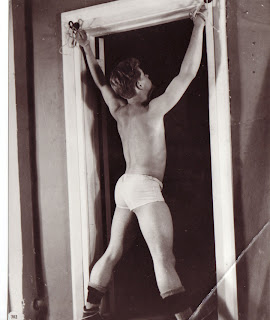 Royale - Man tied to a door frame
This man is tied to the frame of a door which is not a standard Royale situation, but his shorts and socks could easily be the same as those featured in the last few postings of football mayhem. I haven't succeeded in identifying this individual in those sets though! I commented before how these bouffant hair styles make the head look bigger and the body smaller, creating a boyish effect which may appeal to some, but I prefer manly qualities which are most evident in this figure from the waist down. If you cover up his head you will see that this is actually quite a chunky man! The cut of the shorts is very brief allowing a sexy glimpse of the lower part of his buttock, Royale tailored items to create these effects, see part 12 for another wearer. I also like the way that the waistband is rolled down suggesting the revelation of more flesh than is proper! 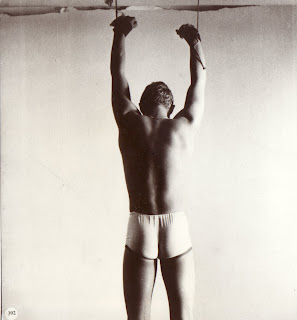 Royale - Suspended in Shorts
The second figure is being subjected to the more usual wrist suspension technique used by Royale and which featured in a couple of the sets reviewed earlier in this series. The submissively bowed head creates tension for what is to come. Some thought has gone into lighting this picture which nicely shows off the musculature of his arms, the sweep of his neck and texture of his hair, the buttocks appear pert rather than bulky but I can't help noticing how the pleats of the shorts pointing downwards suggest a considerable downward pressure on the waistband! Overall there's a strong vertical line in this image which is very striking. 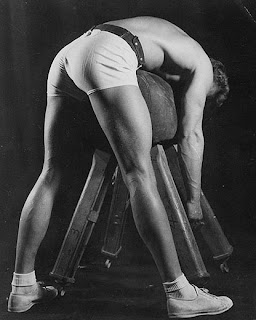 Royale - Man bent over a horse
The final picture shows a man draped over a gym horse, though for some reason it's in a curiously lopsided way which looks very artificial. The model sports a splendid pair of thighs but for me the coiffured hair, neatly turned down socks and freshly ironed shorts don't quite capture the rough masculinity I look for in these pictures.
Posted by Mitchell at 17:48 No comments: 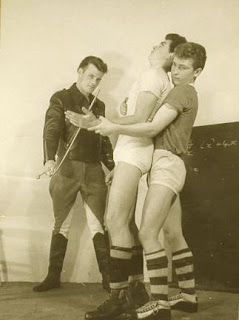 Royale - Caned on the Hand
Another caning story with the same football gear but featuring a different group of men. This time there's a classroom setting and an 'instructor' dressed in military style uniform wielding the cane. The subject of the class, according to the blackboard, is maths, differential equations so it's hard to fathom why they are all wearing football outfits. It's quite hard to sequence these pictures into a plot but I have assumed they all start off fully clothed and progressively undress.
In the first picture a student is caned on the hand by the instructor who is dressed in flamboyant military riding gear. Curiously, another student helps to restrain the victim, using an embrace that is rather intimate considering their skimpy clothing. 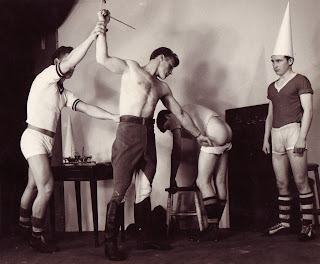 Royale - Rescued from the Cane
The punishment of the offender progresses to bare ass caning and another student comes to his assistance in a rare acting moment. The collaborator from picture 1 has by now been labelled a dunce (i.e. stupid). Even in Royale's time, the school dunce's cap was history, the stuff of children's comics and pre-war schoolboy tales. It's use as a humiliation motif tells you more about the creator's background than anything else, it's certainly not sexy!
You may recall that it was also used by GIU, some years after this set was made, in another group caning scene which I described back at the start of this survey. If you go back and check you will find that set has exactly the same plot elements as this story, but substitutes athletic vests and shoes for football shirts/boots and the instructor wears a different uniform too.
The dunce's shorts are actually more interesting than his headgear. Apparently the Royale models' clothes were dampened to show more of what was underneath and this is a rather successful example. This practice must have been quite uncomfortable for the model and may explain some of their more stilted posing! 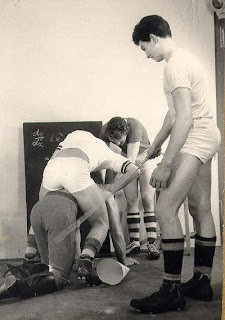 Royale - Student's Revenge
The students take their revenge and one of them gives us a fine bottom and thigh display while there's also a mild treat for boot lovers. The dunce has ditched his cap on the floor.The overthrow of the authority figure, subjecting him to an caning of his own in a most undignified position would have had more shock value in Royale's time than it has today, even these rear views would have raised eyebrows. 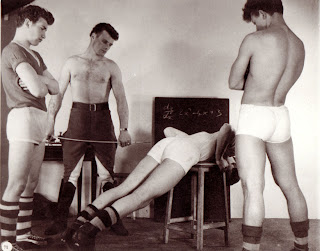 Royale - Bent Over A Stool
In this picture the rescuer has shed his shirt, so it seems that we have moved on and the original order is restored. Punishment of the first victim resumes and his friends watch with arms crossed as though in agreement with their instructor. The sense of collaboration is quite erie and intriguing, not knowing the real story. The damp shorts show their mettle again! 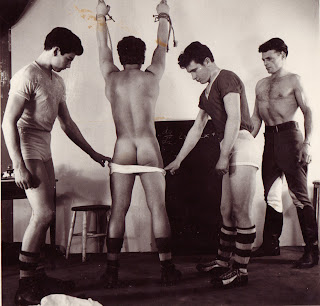 Royale - Bared For Retribution
I placed this one at the end as it fits the traditional Royale finale. Hands hoisted overhead, the rescuer is readied for his own punishment by his submissive classmates. The manipulative power of the instructor comes across but the victim's rather full head of hair seems to diminish his body size so the nudity doesn't have the impact it should. The posing is pretty stiff too but the student with flashy boots shows up well.
Posted by Mitchell at 10:19 No comments: 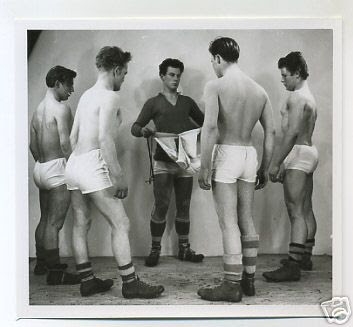 This set continues the football theme, but it's essentially a group of men wearing nothing but tight white shorts - and socks of various patterns which I find are invaluable in tracking the different characters through the 'action'. As far as I can see it's a different group to the last set although they are obviously sharing socks (and possibly shorts too, a nice thought!).
In the first picture the team are watching the referee holding up a pair of ripped shorts which they have just torn off him. This chap's shirt is a real period piece but it's the tight shorts everyone is wearing that are most eye catching.
The referee is Ian Oliver. On the far right is Fred Collins and standing next to him is John Skilling, they also appeared together in Soldier-Sailor. The model on the far left is Tom Manlick, infamous for his appearance wearing a chain pouch in the Horse Guard's series. Next to him is a less well documented model, Alan Hythe
Erotically speaking this is an unremarkable picture but what is striking is the number of actors/models in it - 5. When did you last see 5 men in a modern erotic photo? The only examples I can call to mind are from Bound Gods, maybe a few other major film studios and fashion shoots like underwear range launches. 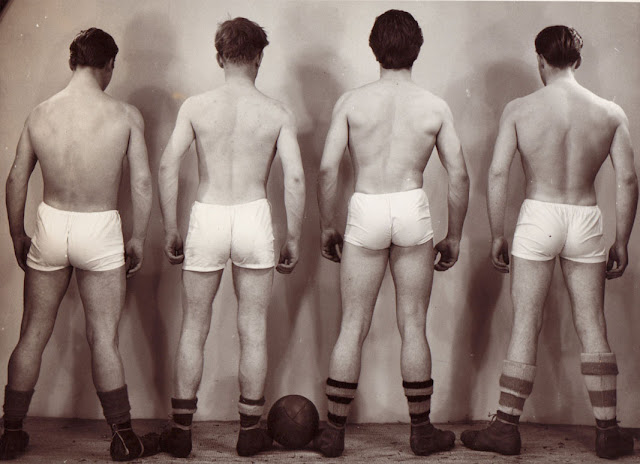 Royale - Bottoms in Football Shorts
This is a straightforward cheesecake shot 50's style but with my interest in shorts and men's bottoms it's irresistible. In Royale's pictures the themes of discipline and submission are never far away so that even a simple line-up like this has darker possibilities. These men have well shaped bodies and natural muscle definition, but Tom Manlick (far left) and John Skilling (far right stand out). With a haircut and new footwear they would grace any modern photographers output. 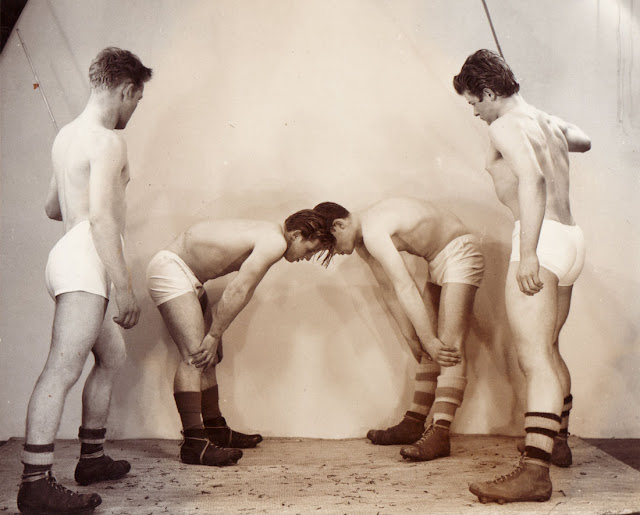 Royale - Double Caning for The Football Team
The series continues with a series of shots in which the models take turns in caning each other (for their misdeeds. This picture sums it up pretty well. There's quite a contrast between these wooden, static pictures and the energy and atmosphere of the last set suggesting they are earlier, or perhaps the models were less experienced.
(L to R: Hythe, Manlick, Skilling, Collins)
Posted by Mitchell at 17:42 No comments:

In the 'Guys in Uniform' review we started with some outstanding gym punishment scenes and it's interesting to compare the Royale equivalents. 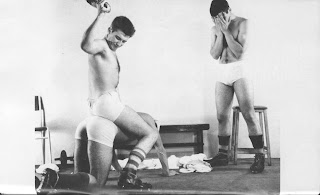 Royale Plimsoll Spanking
These pictures appear to be from the same set judging by the socks and seating arrangements although each face is visible in one picture are obscured in the other! I only have these two pictures from this set and have deduced the sequence from Royale's normal modus operandii, but would be delighted to hear from anyone who has more pictures or more information about them. In the first, the spanker rides on his victim like we saw in the last post. He appears to have some authority over the other two men since they offer no resistance. The bystander has been overtaken by dread or remorse - or perhaps he has already had his plimsoll spanking. 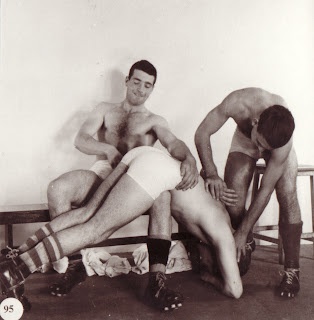 In the other picture the tables are turned, this is one of my favourite Royale images and is very well known. I just love the spanker's laddish, determined face - quite a change from his agonising in the first picture (just check the socks to identify each man) . His colleague applying the barely noticeable arm lock on the victim contributes some sexy thighs to the erotica. This picture has a more natural quality and energy than many of Royale's images. The hand spanking is unusual for them but naturally integrates the participants into a neat, coherent image. The shorts and socks are sexy and look right while the antique football boots are an interesting period detail.


I'd love to find further pictures from that set, please get in touch if you want to swap via mitchmen@gmail.com
Posted by Mitchell at 19:21 No comments: 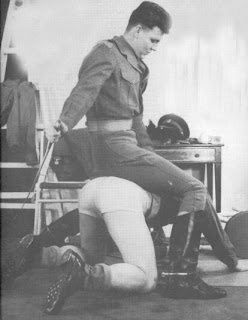