I only have one picture by Orez in my collection but I'm sure he must have produced more, it's quite apparent that he has a well developed technique. 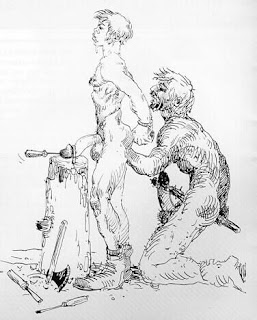 Orez - Tree Stump
A powerful sense of threat is produced by the caveman-style, spiked club and the array of various sharp-edged tools scattered around. Orez pushes the menace right to the edge without quite resorting to Greasetank-style explicitness. The bondange depicted is refreshingly uncomplicated, but still chillingly effective - the young man's manhood is uncompromisingly secured to the flat top of a symbolically saw-off tree-stump. Tom of Finland also employed lumberjack images involving sawn off trees but as far as I can recall he never made this freudian association (although he certainly flirts with the threat of mutilation in later work).


I generally prefer lusher, prettier styles but this spiky, pen and ink technique adds a sense of uncontrolled, spontaneous horror to the image through association with the historic depictions of genuine atrocities and punishments - by Goya for example.

I don't have a link for Orez but would welcome more information from readers
For more articles in this series click on the A-Z label below.
Posted by Mitchell at 09:20 No comments: