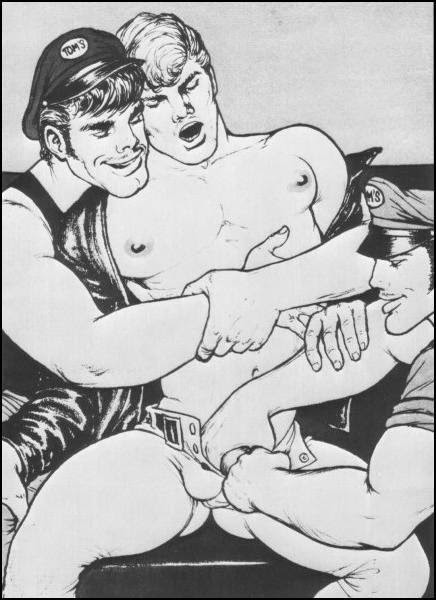 After a strange run of experimental subjects, Tom seems to regain his creative focus in Kake No 10 (Raunchy Truckers). Kake is now working as a truck driver (no motorbike note!). He returns to his old ways by picking up an attractive, young hitch-hiker and assertively seducing him in confines of his cab.

I have a soft spot for this episode of the saga. The hitch-hiker scenario has the adventure of uncertainty built into it (probably more exciting in gay fantasy than reality) and the truck driver directing his mighty machine always seems the essence of masculinity. The cab is his private domain, a man-cave where he is in total control, so Kake does not need to rush the job once the unsuspecting lad is aboard. He overcomes the initial reluctance of his surprised quarry with the assistance of his crew-mate, who contains the young man's initial resistance (above) which inevitably subsides in inverse proportion to the size of his erection. The struggle is gritty enough to raise the temperature, but there's not much doubt by the end that everyone's in the same camp.

The explicit, athletic sex depicted in these books retains it's power to excite and arouse to this day. It can even hold it's head up next to the modern mass of high quality, carefully crafted photographic and video images of real muscle gods having real sex. But when this book was published (ca1970), such material did not exist. Tom's work was hard to find (in the UK police were still routinely seizing anything explicit), but it was uniquely erotic and the liberating impact that it had in a fragmented, lonely and still largely closeted gay world can scarcely be imagined. Tom was not responsible for this 'Gay Spring' but his early suggestive images in Physique Pictorial (see  Part 1) were among the first snowdrops and this Kake series was a flowering of unexpected, stunning blooms that confirmed Summer really was on the way.

Another innocent is lured into Kake's den at home in the TV Repairman story (No 11) and I posted the electric 'moment of realisation' from this story in part 1 (here). This story has a humorous twist as Kake reveals his TV is not broken but just unplugged. It makes you wonder, since hunky and incompetent TV repairmen are not ten a penny, whether Kake's become a stalker. 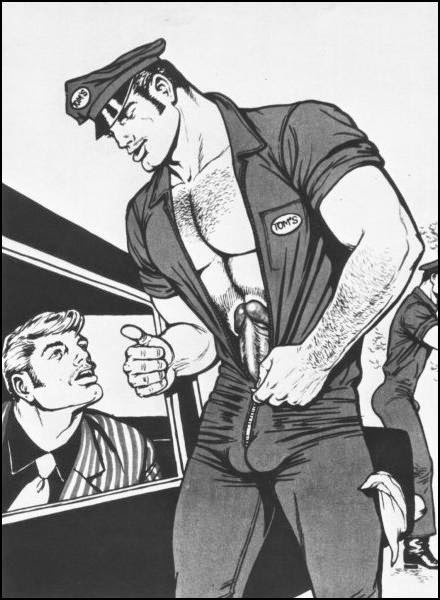 Story No 12 finds our hero working as a attendant in a Service Station where the staff (above) have to wear close-fitting overalls. Tom manages to make them into a very sexy garment (despite the flared legs) and this is more than enough to kick-start the interest of a motorist who calls in to fill up.
As an aside, it's a mystery to me that Tom took so much trouble when he drew motorcycles but never managed to draw a remotely lifelike automobile.
. 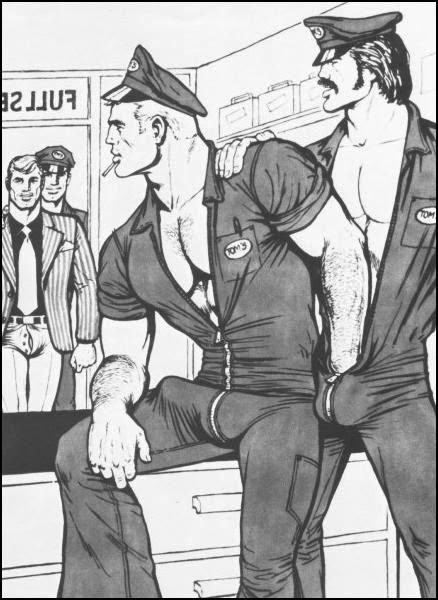 His excitement when he is is invited in to meet two more, equally hunky and sexily-clad mechanics can only be imagined! For me, this modest, uncontroversial four-some (with oil can) is more successful than the free-for-all in Kake 7.
. 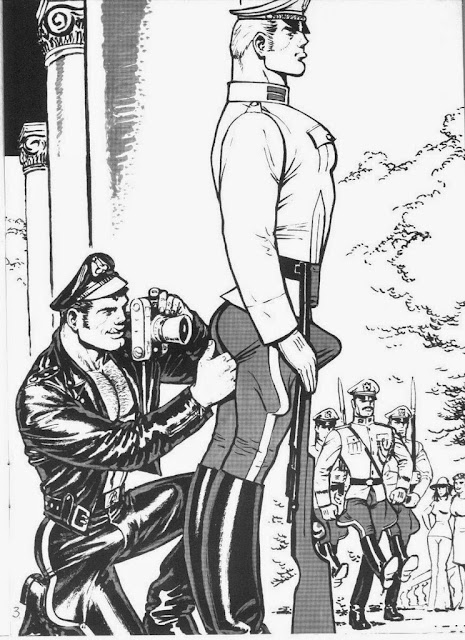 After these two mild, 'carefree sex' stories there's a double-barrelled treat for fetish fans as Kake re-dons his leather jacket (but not his motorcycle) for some sight-seeing, taking in the changing of the guard at what looks like a Central European location. As you would expect, Kake takes up the time-honoured tourist game of trying to make the sentry react or smile, but he forges into new territory with extreme close-up photography and goosing.
. 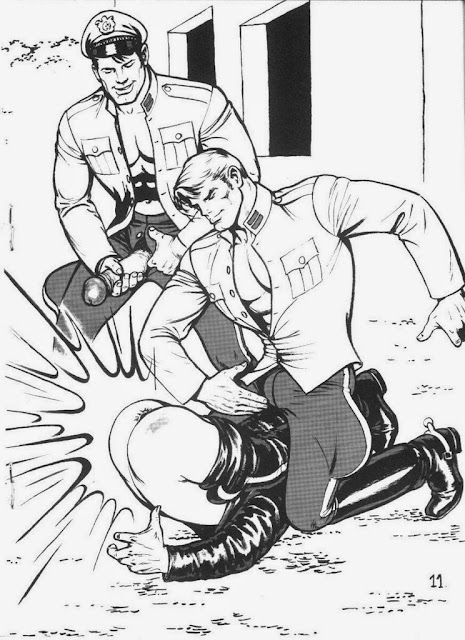 The aroused sentry gets into trouble with his superior officer and is looking for pay-back when Kake reappears near the barracks. The resulting brawl ends with Kake being spanked, then fucked and even fisted. 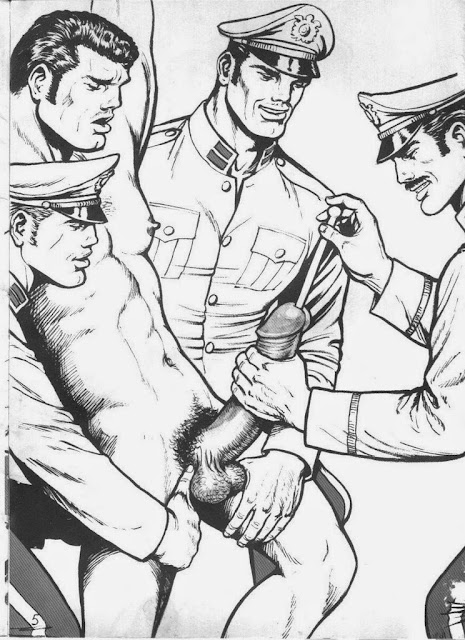 The Sounding  of Kake

The rough revenge taken by the troopers is seen by their officer
and, in a re-run of Kake's first encounter with the police,
he is taken into custody as a trouble-maker, stripped,
then subjected to a dizzying succession of fetish punishments and 'tests'
- starting with the long anticipated 'sounding' (above).
. 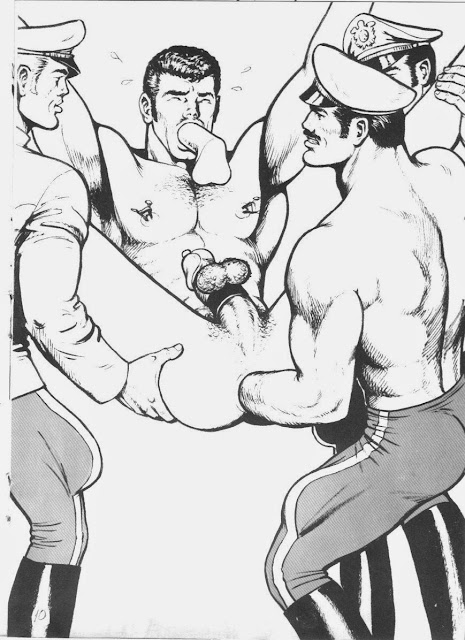 This is an earthquake for Kake fans, quite unlike anything that went before and in it's way quite shocking. I suspect it is a genuine first in gay publishing possibly pre-dating the milestone 1974 S&M video 'Born to Raise Hell'. The sudden revelation of Tom's deep knowledge of such things must have disturbed some and enraptured others.

There are few dungeon-like scenes in his later work but his lasting interest was shown in 1989, two years before his death, when he produced a dramatic picture showing a uniformed guard whipping the bare back of a chained prisoner in a dark, stone cell*.
It's drawn in a fluid style with crayons and quite unlike his earlier work.
*See Tom of Finland retrospective III, p174 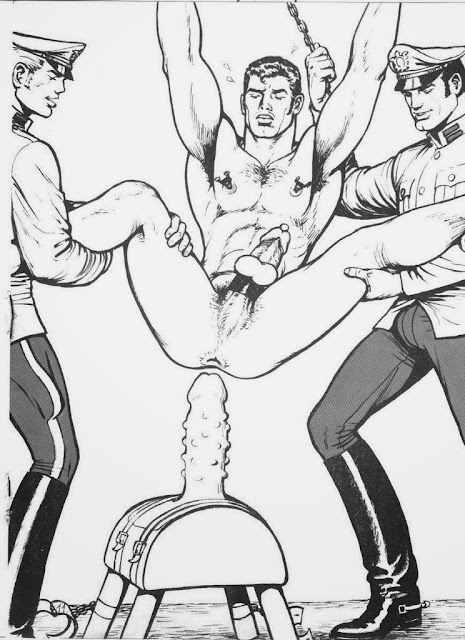 This is the nearest Tom gets to a 'riding the wedge' scenario (see labels at foot of this post for others). I'm not a big fan of simultaneous multiple tortures (like these examples byTagame), but Tom's approach is at least progressive and he does not jump straight to the end result. In 'Raunchy Truckers' he shows the progressive disrobing and invasion of the confused hitcher, not instant nudity and penetration. The journey is as important as the destination. Here too he shows the stripping, restraining and application of each new torment to Kake's body gradually
- at least he tries to, but 20 pages is not nearly enough.

The drawing here is not his best but nevertheless this work is still something of a tour-de-force. Producing it was swashbuckling adventurism worthy of Kake himself and you have to wonder how much of Tom's character is reflected in his hero. 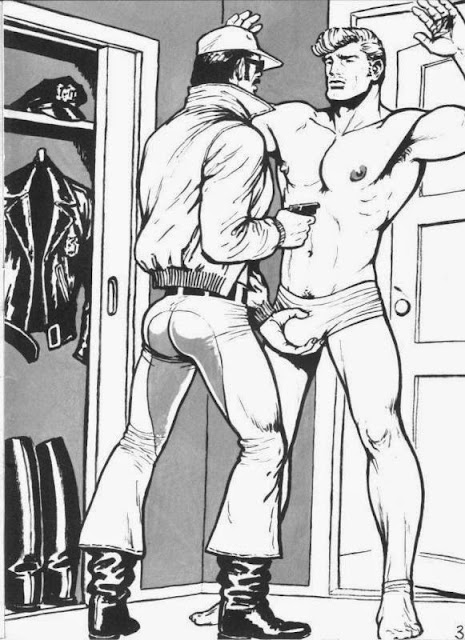 Kake 15 is equally controversial in it's own way as a policeman home after work opens his front door in his underwear to find an armed man menacing him. Neither man appears to be Kake. The invader has a sinister appearance with long hair and a droopy moustache. The policeman is a muscular man with blond hair, suggesting purity perhaps but in virtually every other Kake story blond hair signifies desirability and ultimately submissiveness and passivity.
. 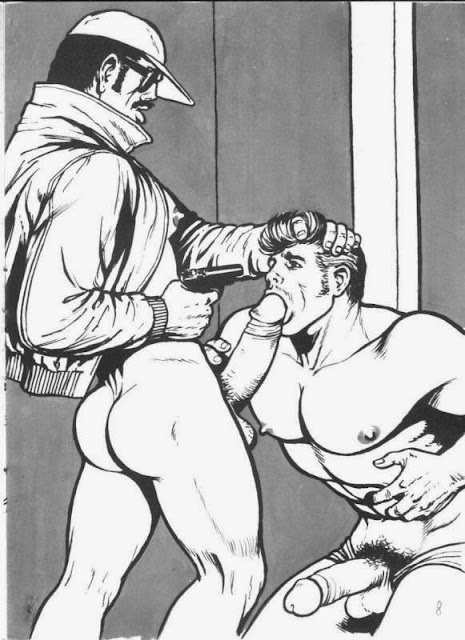 Humbled Cop
The cop is groped and forced to pleasure his attacker (above) before being cuffed to his own bed. As he gives up his ass to the intruder in a rough reworking of the Kake-1 scenario, Tom pans back ironically to reveal his discarded police trousers and boots and a row of body-building trophies on the side-unit, symbols of his authority and physical strength, which avail him of naught at this moment.
. 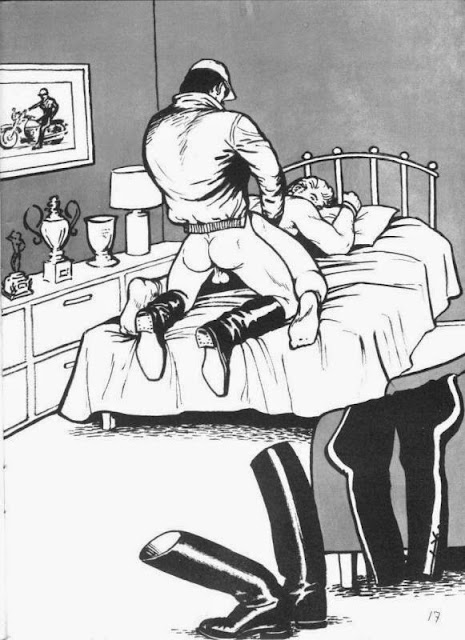 There's no pretence of consensus in this story, unless you cite the policeman's sexual response to the attack on him. The two men could be engaged in a rough role play, but there's no explanatory, rueful smiles to be seen. Superficially it reads like a man acting on a grudge or a sexual predator with a more aggressive disposition than Kake himself.

With these two episodes, the hard edge to Tom's work becomes glaringly obvious and fetish enthusiasts will love it. Dennis Forbes writes in the first Tom of Finland retrospective volume 1:- “...there is nothing mean spirited or sinister about a Tom fantasy”.

Perhaps he never read Kake 15. It is sinister, but that quality does not derive from meanness of spirit, but from having experienced meanness of spirit. The sort of meanness depicted so melodramatically by the Guardsmen in Kake 14. In these two tales it's as though Tom has suddenly found the freedom to vent some deeply held feelings and he deserves to be heard.

For other artists in the A-Z series click on the label below or search by name.
Posted by Mitchell at 09:25

Thx Mitch for another penetrating(!)analysis of Kake in ToF. The 'Romancing the guards; story can hardly be in Central Europe,can it,before 1989.Its fascism and sadism(& US tourists) point to Central or S. America. And you are right about police activity: i had a mag. shipment from USA confiscated by Customs is police as late as about 1990.

Thanks for the comment, my guess about the location was based simply on the guards' uniforms and the ornate building they are guarding. I thought Tom was probably drawing on his general knowledge of Germany (including pre-war) and Scandinavia rather than depicting an exact location with the sadism as a pure fantasy add-on. The guards look too European to me for your Latin America option and I'd expect Tom to show something really stereotypical like a poncho or curly moustache if that was what he had in mind!

3/14/16 11:59p Tom of Finland Kake in Canada
Kake is Sight Seeing In Canada those men are Mounties.
I have the completed panels in one of Finland's books.
I wish Finland had shown the Mountie getting spanked for getting aroused while on Duty by his superior. Another Mountie watched this and he got excited and joined in.
Then he would chase Kake down pull his leather pants down and bare his ass for a fierce spanking.
It was very arousing for the Mountie to see Kake take very close up Pics of the Mounties Basket and Butt.
The Mountie got even with Kake. The Superior Mountie took the story into a foul direction.
Kake was abused in the worst way. I didn't like it.