This artist was one of those blazing stars who flare brightly but briefly and then disappear back to their day jobs having left behind a priceless collection of of classic images which leave you longing for more. 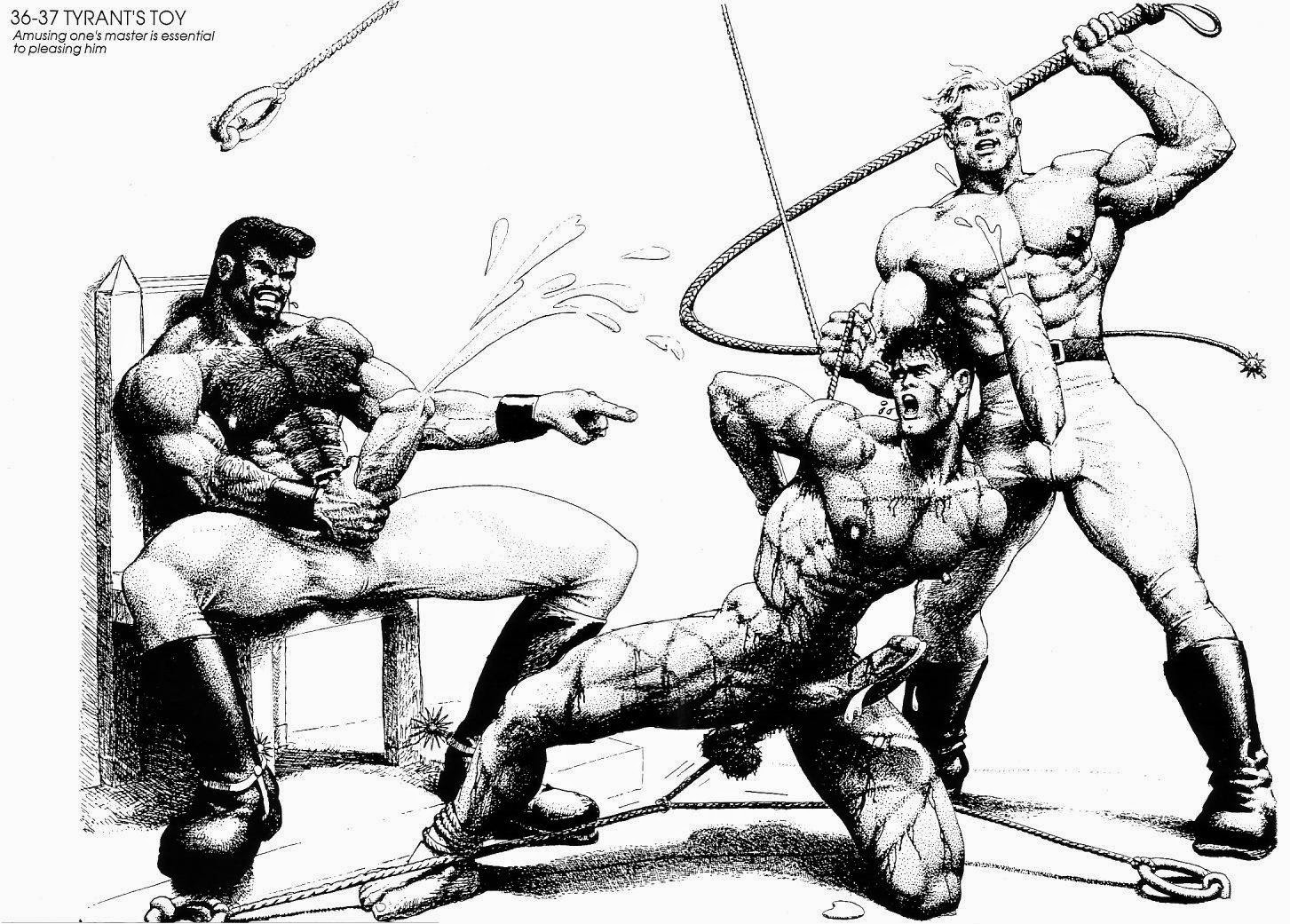 It's the captive's awkward, extended, angular pose that makes this picture so striking. The simple tethering of legs, arms and dick renders him totally helpless. He cannot rise or take up any normal body position and it would be a nasty torture in it's own right over any extended period of time. His anguished expression displays not just the pain of the whip and his bondage but a dog-like deference towards his master, a wariness of how much longer this will continue - and what may be demanded of him next.

You can see the influence of 'the Hun' in Teddy's portrayal of The Tyrant and maybe Tom of Finland in the crazed whip man. They are pretty much stock characters, but the 'Toy', who is a markedly handsome man with a slender body and long muscular legs is entirely Teddy's own creation. He's not stereotypical dungeon fodder but instead looks like a model, a sporting hero, the man who has everything – or used to. His youthful beauty makes the level of violence used against him (implied by the network of whip marks all over his body) seem all the more destructive. The absurdly exaggerated sexual excitement of all concerned lightens the atmosphere and sanitises the scene to a degree. But, unlike Tam's explorations of pain and sexual arousal, there's no suggestion of physical intimacy here.

Teddy's best pictures have a powerful a sense of unrestrained energy, suggesting an emotional commitment to the subject matter, which is also reflected in his use of a sophisticated and time consuming pointillist technique. Sadly the scan has degraded the detail, obscuring the artist's skill. 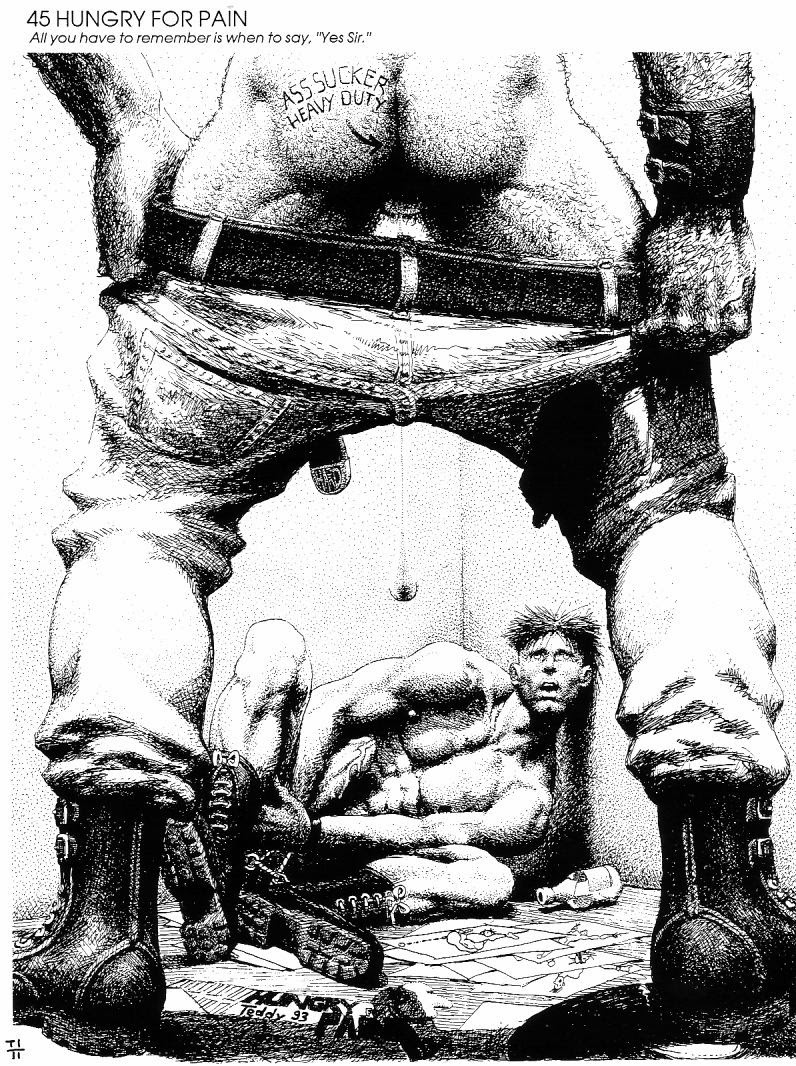 Teddy of Paris 2 – Hungry for Pain

This image has not the same physical energy, but there's still a powerful intensity about the portrayal of a fearful, cringing prisoner confronted by a sexual beast. Interestingly, there are sketches of bondage positions lying on the floor suggesting the artist is representing himself and expressing some very personal feelings here, including presumably the words of the title incorporated into the floor. Once again, the technique and astonishing level of erotically-focussed detail (the seams of the jeans, the hairy ass) demonstrate a deep personal interest. 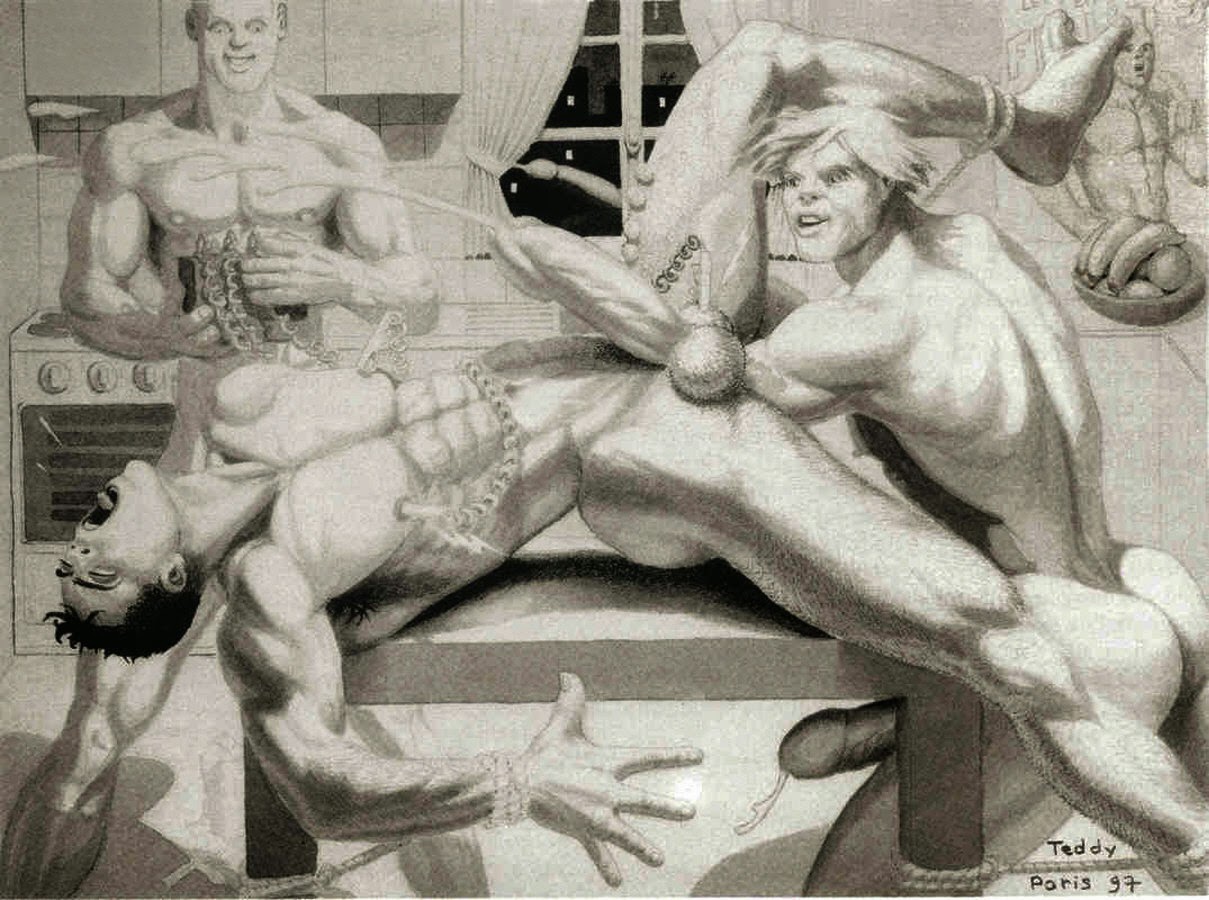 Teddy of Paris 3 – Kitchen Scene
(from The Bridegroom's Cherry)

A good deal of Teddy's reputation comes from the illustrations he did for the story of 'The Bridegroom's Cherry'. These pictures feature men with manic eyes, long legs and enormous cocks having wild, rough sex. The bridegroom of the title (seen here tied to the kitchen table) becomes the sexual victim of a gang who raid his flat and stay to play. 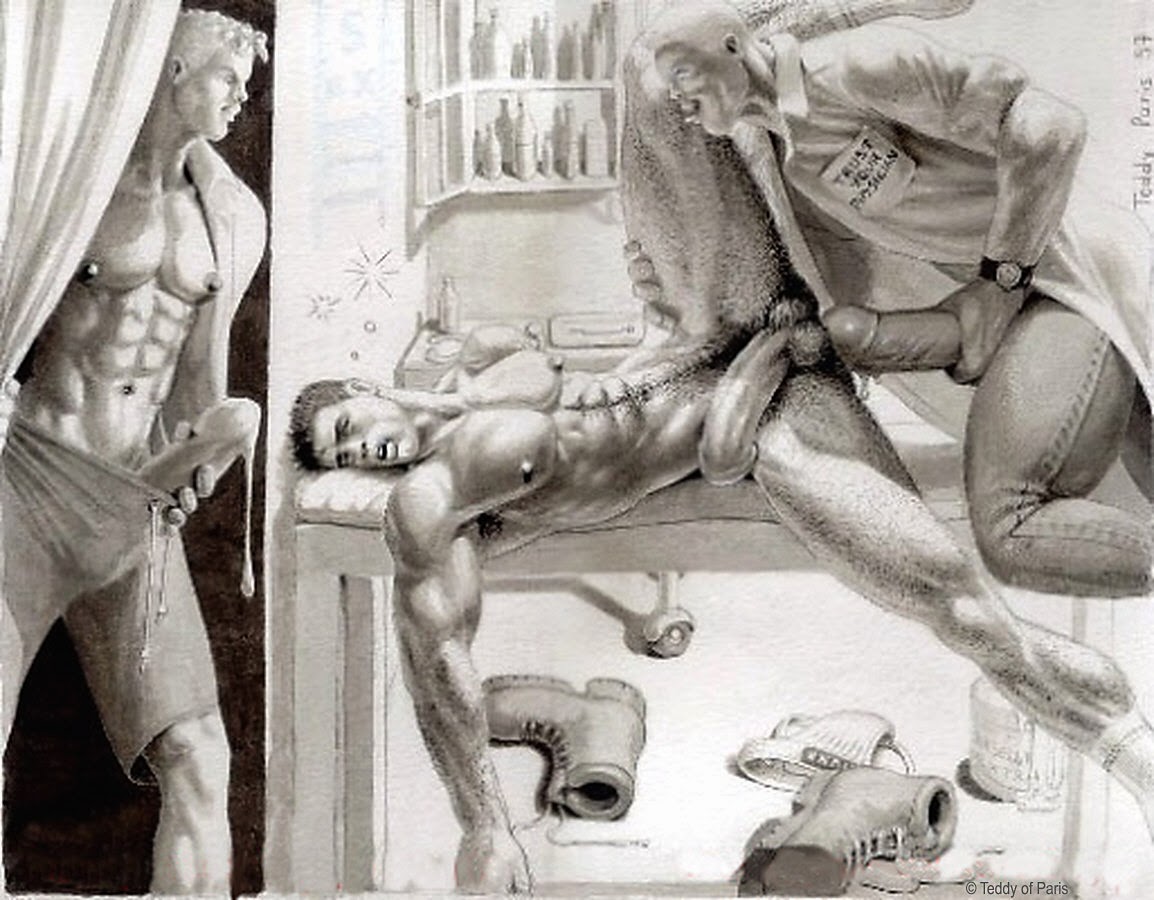 Teddy of Paris 4 – Hospital Scene
(from The Bridegroom's Cherry)

The hapless Bridegroom (this time lying dazed on the Hospital trolley) seems perpetually bewildered as he is by turns forced, drugged ,cajoled and tricked into man-sex with all manner of opportunist predators – in this case the Hospital intern who is supposed to be treating him for injuries received from his attackers (it turns out that the orderly enjoying the scene is actually one of the gang himself).

The portrayal of the Bridegroom in these pictures is like the victim in 'Tyrants Toy'. They are both attractive and pretty normal-looking men (in stark contrast to their assailants). This one is a construction worker who is so butch he wears a jockstrap instead of underwear. Both are made to submit to stronger (or more devious) men. Both are propelled along a rocky road discovering an ability to enjoy man-sex and abusive domination.

Some of the other pictures in this series, geared to the storyline, lack the intensity of these two. Teddy has not used his pointillist technique either, possibly reflecting the fact that it's a commission not a personal project. It looks as if the originals are painted with watercolours or inkwash and available scans of these pictures are poor, suffering from excess of contrast giving them an eerie, misty quality.

The images for this tale circulate without any storyline, but I recently discovered a text for the story at 'Daddy's Here' (link below). It's not great literature (all fetid armpits and globular cheeks, quote:- “the sound of slurpings and slobberings and slaverings bounced off the walls of the room”). Despite this it does provide a narrative that plausibly links most of the images. However this text implies a different picture sequence to those of at least 4 sets circulating on the internet (including Daddies own!) Interestingly, while there is a scene in this text where the groom is tied to the kitchen table, it doesn't feature electro torture or fisting, but shaving and body painting instead. Watered down for publication? 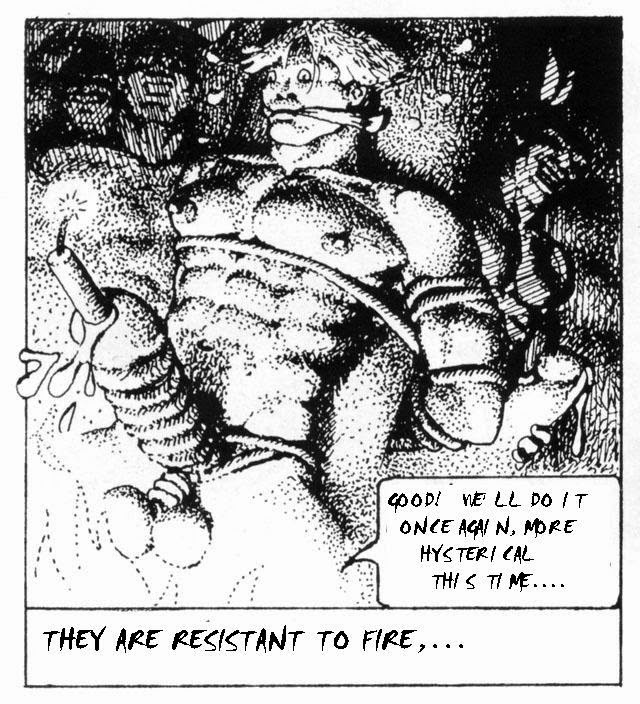 Teddy of Paris 5 – Kiwi at the Stake

The third string to Teddy's bow was his series of cartoons about 'Kiwi', a young man who is unambiguously gay but always manages to get himself into embarrassing and painful scrapes. There must have been many episodes produced but they are not easy to track down. These samples are taken from 'Kiwi hits the Screen' where the young man is hired for an acting job but goes to the wrong studio. He ends up starring in an advert extolling the virtues of 'Securit' restraint ropes in various situations – all of which call for Kiwi to be tied up and abused, but neither he nor the reader knows what is really going on until the final frame. This is one of the more spectacular endorsement scenarios and allows Teddy to show his skill with light and flame effects (it compares well with previous conflagrations from Saj, Sean and Sergey). Kiwi's terrified eyes, comic though they are, make the image rather special for those with sadistic leanings. 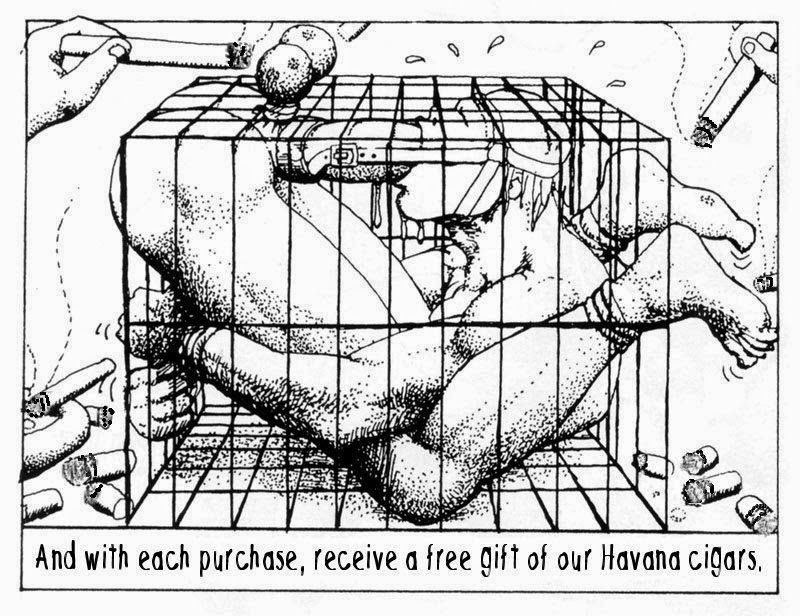 Teddy of Paris 6 – Kiwi crated up

Virtually every frame of this comic strip contains a fresh idea and nearly every one is a little gem capable of standing up as a picture on it's own - it's a classic example of the effort and quality Teddy put into his work for us to enjoy, although it leaves you yearning for more developed versions. 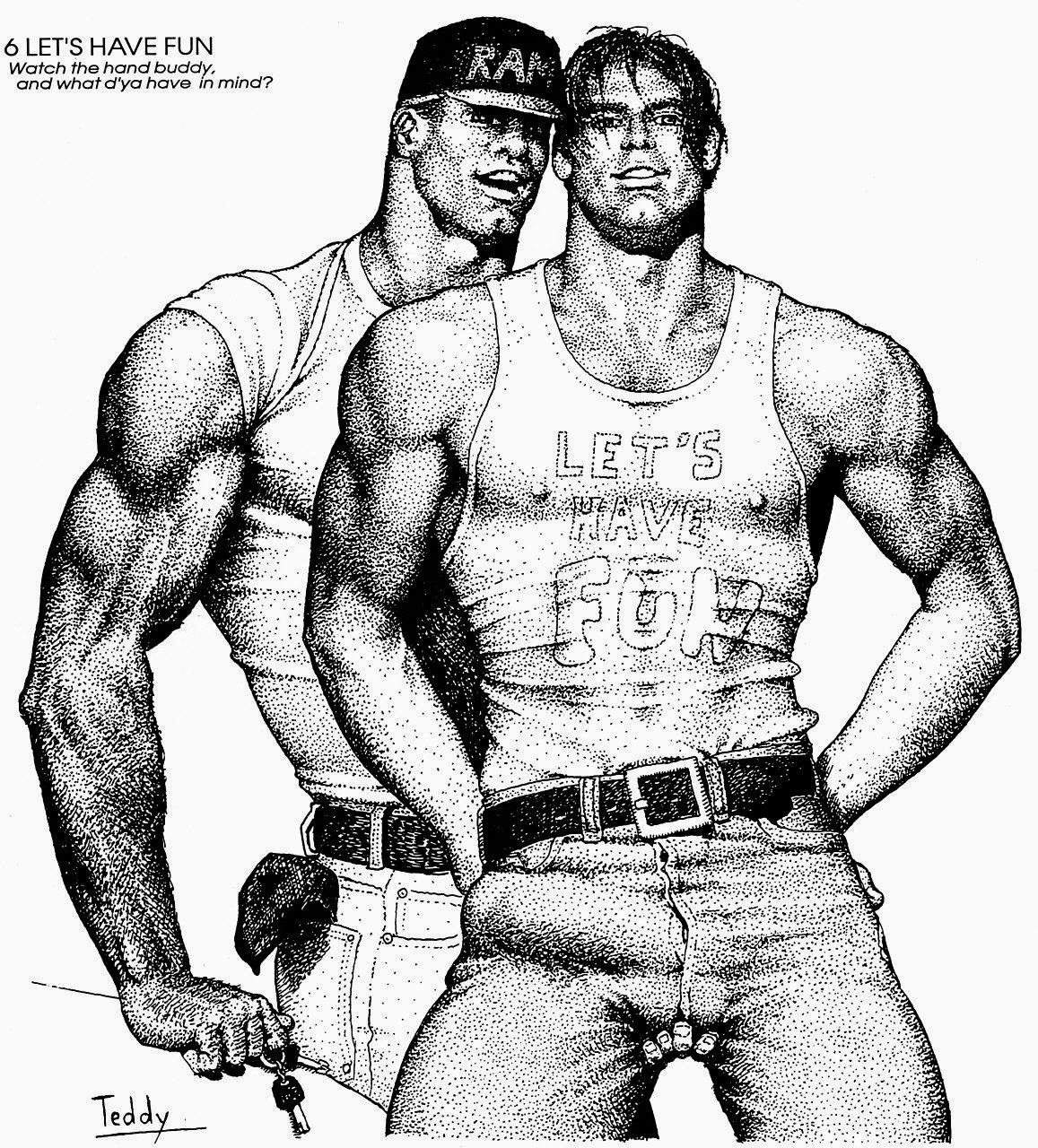 The handkerchief proclaims the groper to be a bottom or receiver, but he's no wimp and seems to have this situation well in hand. Do the keys indicate he's ready to go, or something more symbolic when combined with that approach from behind? (See here for clarification!) The colour of his preference hanky remains tantalisingly unknown to us, but it's dark (and there appears to be a hidden symbol of some kind). In any event his sly, confident air suggests that our hero may be in for more than he expected. 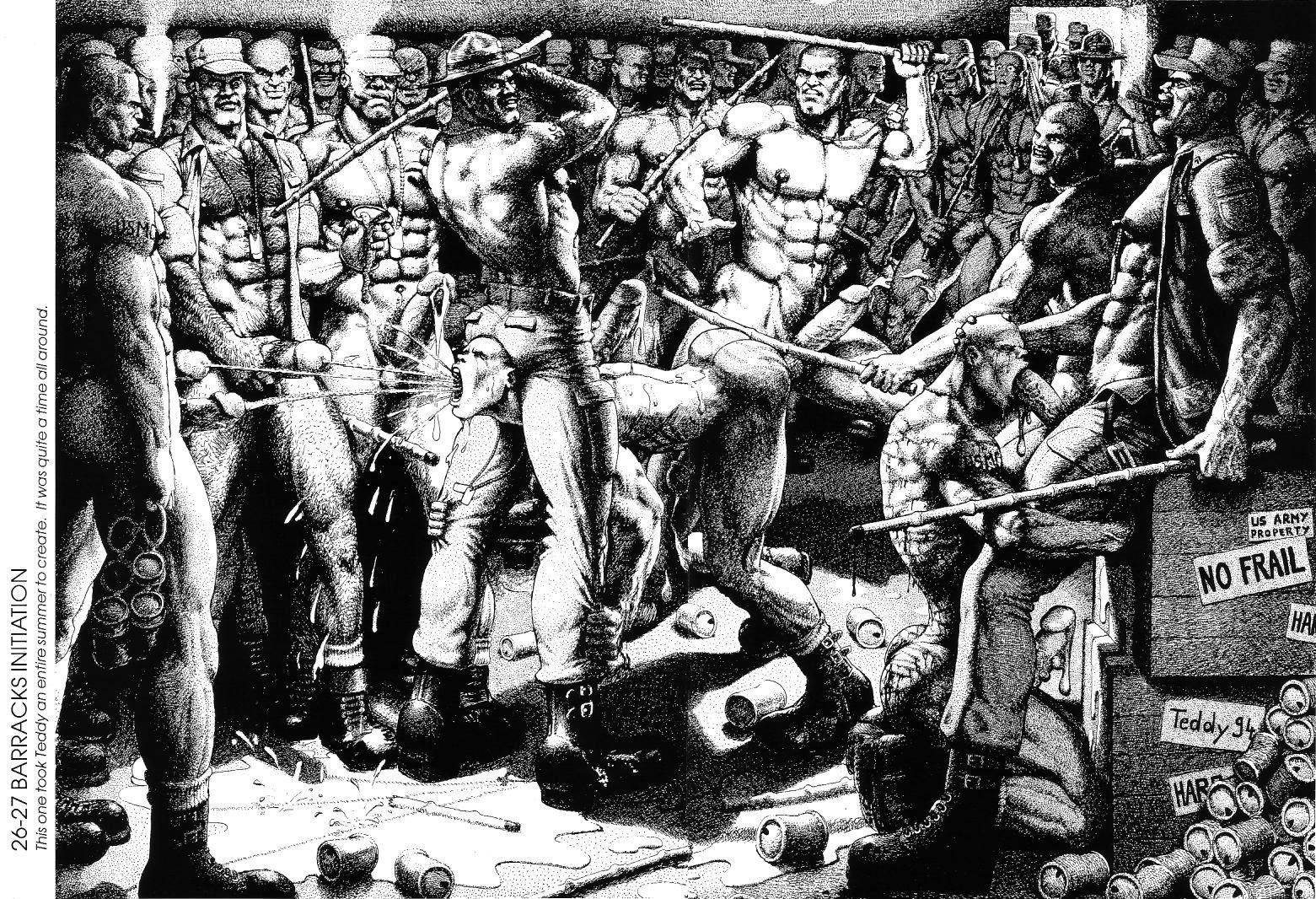 This picture is something of a tour de force and must have been a labour of love, as the annotation suggests. It's a sort of S&M equivalent of Tom of Finland's giant orgy scenes. There are 4-5 areas of detail within the composition which are beautifully done (I love the man standing on the left margin, cans in hand). Visually, the picture is dominated by the two central figures and the backbone of the composition – a narrowing corridor receding to the top right corner – gets a bit lost in the detail (in this scan at least). However, it's a fascinating scene, with terrified, new recruits being brought down distant steps from the bright world outside, through a corridor of watching, jeering, leering men into a dark, manic arena, there to be subjected to arbitrary punishment and humiliation.

You can tell from the sheer work that has gone into this picture and from the facial expressions and abuses depicted in it that Teddy has expressed some deep, inner feelings here which were important to him and it deserves to be taken seriously by us. Psycho-analysts relate tunnel imagery to the memory of being born and in a sense that is what is happening here, the birth of innocents into a terrifying world of undeserved punishment and brutally enforced conformity. The experience of growing up gay? Perhaps. Significantly it's from light into darkness, the reverse of normal birth.

It seems that Teddy was self-taught but his technical skills are of a very high order. His uproarious expressions of energetic sex and devilish punishments mark him apart from other S&M artists. It's a shame it came to an end so quickly.

Teddy was resident at a site called Curious Yellow in the 90's, but it seems to have gone now. His pictures are not hard to find on the net, there's a good selection and a text for 'Bridegroom's Cherry' at Daddy's Here

Note: Since I published this article, Teddy has been in touch with me and provided a link to his flickr page. He's now (Oct 2021) planning a Patreon page. You can see the correspondence in the comments section below.
For previous articles in this 'mitchmen' series click on the A-Z label below
Posted by Mitchell at 09:34

I know Teddy just a bit. I believe a major reason for his disappearance was that he got no appreciation or feedback in the gay art world. Artists need that appreciation to keep it going. -Joe T.

I can understand that, but we are the poorer for it. These days an artist can take some comfort from follower numberss, blog repostings and monosyllabic comments like 'hot!' but articulate reponses are still a rare species. Teddy's work merited appreciation, I hope my article does him justice.

Mitchell : Yes, you gave him a good one there. -J.

I am Teddy of Paris and I have to thank you a lot for that page, specially for those terrific comments. I stopped at the end of the 90s. No money, a kind of nervous breakdown, no more self-estime. Nothing original there. Feel better, could resume... Could... One of my last artwork is also one of my prefered (dated 2000). Too big to scan it properly, have to do it in 6 parts I have never taken the time to put together. You're so kind I may do it these days. Keep you informed. Thanks again. Michel/Teddy of Paris

Thank you for your comment, it would be marvellous to see more of your terrific art.

Done. Badly done (the initials scans are not as complete as I expected and can't really match all the six parts). Unfortunately, the original artwork is somewhere in the US. But if you wish to see the result, that can give you an idea. Just tell me where I can send it to you.

I love those Kiwi drawings- let's hope teddy produs=ces some new ones soon! I wuld certainly pay for them.

Thanks for keeping in touch Teddy, I wish you every success!