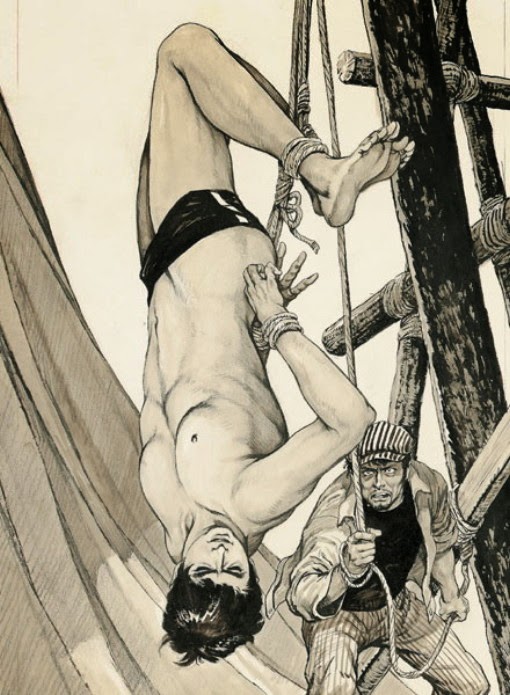 This is the only picture I have ever seen by this artist but it's something of a classic. The eroticism is beautifully understated and in it's day (1971), when tying men up with rope was just a routine way of inhibiting their heroics, the significance of the captive's dislodged shorts were probably lost on the average viewer - or perhaps seen as a reflection on the low class manners of the attacker.

Much of the impact of the picture comes from the scary suspension, whose threat is considerably amplified by the upward looking viewpoint and the soaring log-built frame on the right. The vulnerability of the captive is magnified by contrasting his near-nakedness with the over-dressed villain whose bizarre designer look gives a decidedly scary tweak to his manic, angry behaviour. In my article on Tagame I said that upside down images were hard for our brains to process but this effort works better than most, possibly because the youth's body isn't full of distracting detail.

This is a very successful picture built around the spectacular use of perspective, so thrilling in fact that you don't even notice that the villain doesn't fit into it technically. While the rest of the picture is looking up, we seem to be looking down on him and yet somehow the discrepancy doesn't jar, how clever is that? It's similar to the 'multi-image within a picture' effect I talked about with Tam, where the brain seems to be able to blend/cut incompatible images together, almost creating an extra dimension.

For previous articles in this 'mitchmen' series click on the A-Z label below
Posted by Mitchell at 18:56