Abductions - Carried off over the shoulder 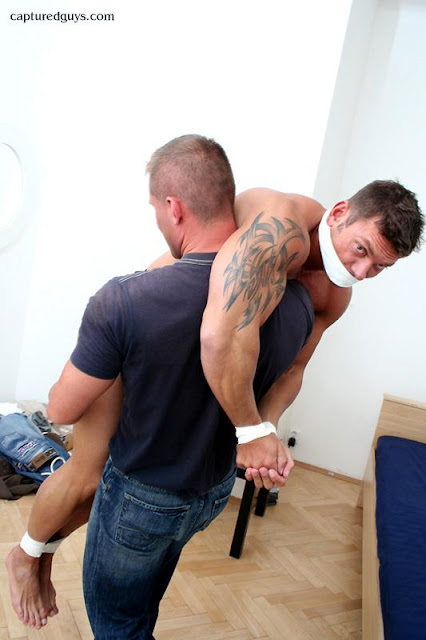 This picture courtesy Captured Guys illustrates of one of my favourite topics - helpless men being carried off into captivity. It's a theme explored in S+M Clinic where Steven Chadwick fails to turn up for his medical and is brought in by force having been apprehended in the middle of taking a bath by officers of the Delinquent Patients Unit (below). 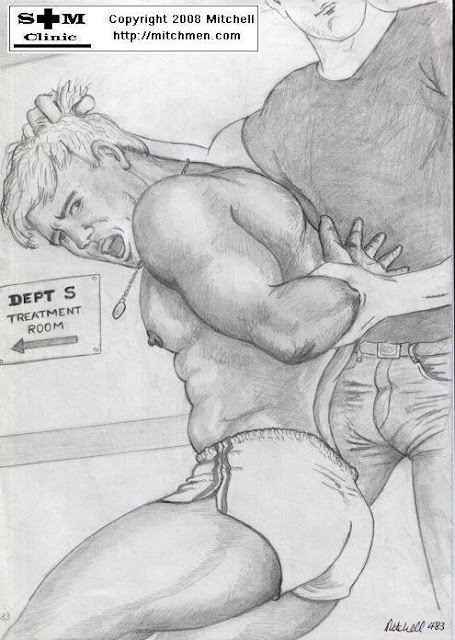 This picture was voted the favourite so far in Mitchell's S+M Clinic series by 'mitchmen' members. It has no nudity and very little explicit sexual content so it's an interesting choice. The tight shorts and face seem to play a big part. Also it leaves plenty to the imagination as to what happens in Dept S. Obviously the athlete is not looking forward to it!
Posted by Mitchell at 18:08 No comments:

This picture is a detail from my current series at mitchmen. It combines several of my long standing fetishes - nice round bottoms, underwear (white of course) and needles - and I suppose I should add quivering men to that list! 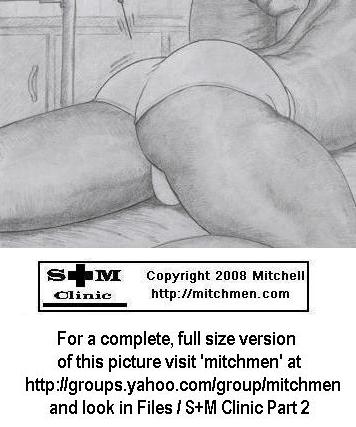 White underwear will be featured in my occasional 'In Praise of ....' articles before too long. The needle motif pops up in a lot of my pictures (notably the Cactus Kid picture story). I suppose there's an obvious phallic connection but I have never worked out where this particular interest comes from.
Posted by Mitchell at 07:00 1 comment:

Not much activity on the 'mitchmen' blog of late as I'm preoccupied with helping my partner run his business and posting daily episodes of the S+M Clinic series at the mitchmen Yahoo! Group (there's a link in heading above). I have been asked where's the S&M in the story as the episodes so far have been fairly innocuous undressing and humiliation with not a lot of more extreme stuff. Well it's coming! Things have started to hot up with the abduction of Steven who decided not to attend for his appointment. He's now discovered that Mitchell's Clinics don't take no for an answer! The sketch below didn't make it into the final set of pictures. It shows Steven being carried off - bound and gagged - by the DPU (Delinquent Patients Unit). 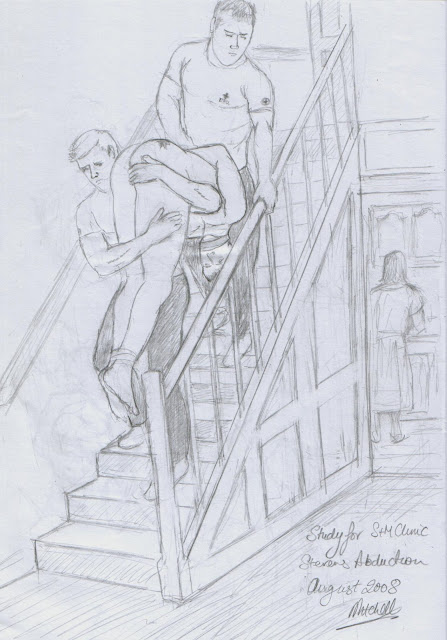 When I'm compiling a mitchmen story one of the problems I have is too many ideas. I produce lot of sketches and vast amounts of reference material but most of it doesn't get used. For S+M Clinic I have numbered the pictures in increments of 10 i.e. 010, 020, 030.... rather than 01,02,03,.... with the idea of going back at some future date and adding in extra drawings. The one above is quite likely to be the basis of one of them - more close up I think with lots of juicy detail.


Those of you following the story will probably realise by now that I can add extra 'departments' at will. We already have visited Department 'H' (Health Education) and Department 'S' (Sex Education). I have already pencilled in departments for virtually every letter of the alphabet so the Clinic is starting to look like a lifetimes project for me! So little time!
Posted by Mitchell at 11:35 No comments:

Rugbymen return to mitchmen - Spanked in front of the Team 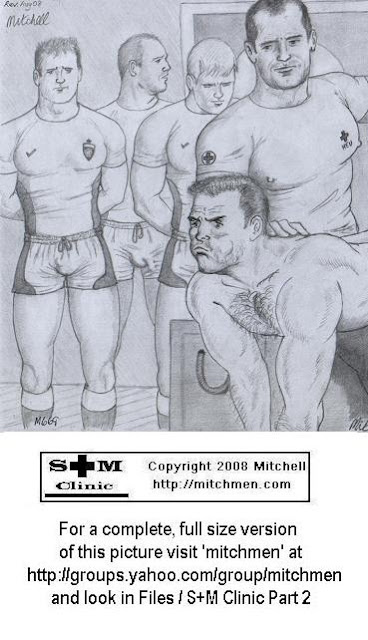 This is a detail from my latest S+M Clinic picture. The original sketch for this picture depicting just the two men involved in the spanking has been hanging around for a long, long time screaming to be finished. I was pleased with the victim's face when I first sketched it. I held back on completion worried the expression might get lost in the completion process. However I have been able to finish the picture without touching this figure save for the skin highlights. I have been promising myself for about a year now to draw some rugby players in the modern clingy style of kit and finally took the opportunity with this picture to have a first attempt. I'm quite pleased with the final picture as a representation of my fantasy. I believe it's my first, published 'conventional' hand spanking. The full picture is at mitchmen (link in sidebar)

Posted by Mitchell at 21:14 No comments: 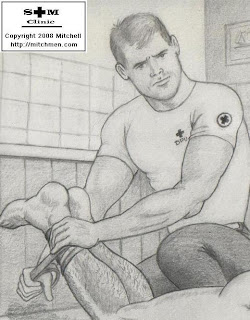 It's a while since my last post but I'm finally ready to resume the S+M Clinic series.


The preview above is a detail from one of the pictures.
In Part 2 the Physical Screening commences and the boys are subjected to a variety of unconventional and embarassing examinations and treatments.
The pictures for part 2 will be placed in the files at 'mitchmen' at yahoo! They will not be posted out. So if you want to see them you need to be a member of the 'mitchmen' group.

Posted by Mitchell at 06:59 No comments: