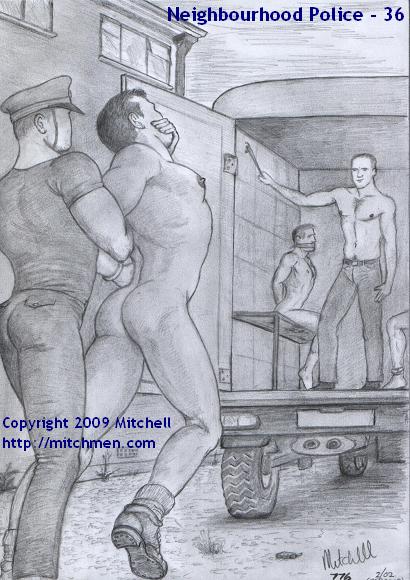 I'm taking the liberty of mentioning myself under the letter 'M', but I will not blowing my own trumpet too much, not in this august company! I have quite eclectic tastes but my main fetish interest is in showing bondage, usually in the context of peril and the sample here incorporating forced 'transfer' as well is fairly representative of my work. I do occasionally explore the more extreme topics such as those represented by other A-Z 'M' artists.

To see more of my work, click on the 'mitchpix' label or join my Yahoo Google! Group, see sidebar for link. I'll be starting a new tale with a military theme at the Y group soon.

To see earlier posts in this series click A-Z in the label list below
Posted by Mitchell at 09:48 4 comments:

The GMBA group which has been one of my major links for fetish art has been deleted so I am removing the link - at least for the time being. Hopefully Pax will restart the group but it seems the picture archive has been lost.
Posted by Mitchell at 13:37 1 comment: 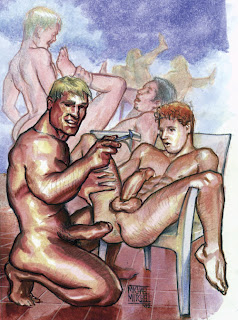 Michael Mitchell - Shavers
Just an honourable mention for Minoro who does rather nice pictures of bears and chubbies in leathery situations but mostly with no hard fetish content. This example is an exception. The quality of the artwork speaks for itself.

See more at Art by minoru

Posted by Mitchell at 15:36 No comments: