When writing these articles, there are some subjects which I approach with considerable trepidation, including Nazi themes and scat. Unfortunately Rőhm depicts both of these and the result it not always very pretty. 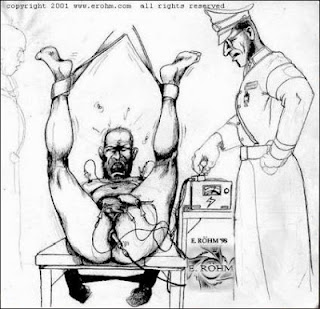 My first image gives an idea of his style. Photo images simulating electro-torture are almost run of the mill erotica these days (I'm thinking Bound Gods again) but it is remarkable how the use of 1940's style greatcoats and spectacles in this picture damps down the sense of eroticism, desexualising the torturer and invoking sinister associations that for most people won't seem very sexy either. The victim too is characterised in an unsympathetic, rather grotesque way, even his fleshy body suggests degeneracy and it all adds up to the sense of not very nice sadism.
Tom of Finland also produced a picture of a muscular man being whipped by a Gestapo officer. He gives the victim a more attractive, manly treatment but the historical associations are so potent that it's still hard to accept as erotic fantasy. Rőhm goes further than this in other pictures and shows scenes set in concentration camps which, for me, are very hard to swallow. 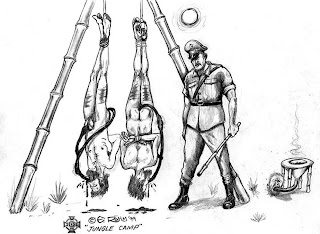 In the second picture the setting moves to tropical climes and a more basic form of torment. You will observe that Rőhm does not draw pretty men - either as captor or victim. I suppose the ageing, overweight torturers are fair enough as a device to suggest humiliation but when the victims are scrawny and dishevelled like this, their masculinity is diminished and although both depictions are scarily realistic, they are erotically quite neutral.
In fetish artwork, depictions of quite extreme torture are often 'legitimised' by using the 'hero effect'. That is to say, the victim is very handsome and muscular and although this somehow makes him deserving of being tormented, he cannot really be harmed and will eventually escape or be rescued. It's clear that the authors of these works do actually love their men and this defuses the nastiness.

Despite my dislike of his subject matter, I do get the point of Rőhm's work and I admire his style which is similar to comic-book techniques. His website erohm.com still exists, the gallery is closed but the home page gives glimpses of his work.

For other articles in this series click on the A-Z label below or use the search box to find a specific artist
Posted by Mitchell at 10:07 No comments: 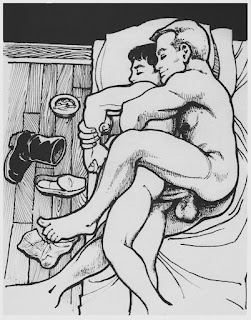 Robin - Sleeping Together
Robin isn't strictly a fetish artist, in fact work like Sleeping Together seems quite cosy to the modern eye. We do have a discarded leather boot here providing a tenuous fetish connection and the hand gripping the younger man's arm hints at an element of forceful passion. The luxuriant eyelashes and prominent cigarettes suggest this work is quite early (50's/60's?) in which case the explicitness of the intercourse shown and the quality of the draughtsmanship mark it out as a bit special. 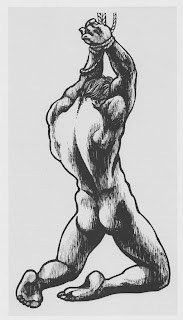 Robin - Bound
Interestingly, Robin's exploration of bondage shown here is much less adventurous and typical of it's time - the ropes are loosely tied (if at all) and largely symbolic but it's a nice picture of submission. The sophisticated vertical shading marks out an artist who has had decent graphical training. These pictures in their broad-stroked simplicity have something of the quality of woodcuts about them which gives them an artistic quality, perhaps designed to defuse the content in less tolerant times.

I don't have a site reference for Robin and would welcome information about him from readers.
For other articles in this series click on the A-Z label below or use the search box to find a specific artist

Posted by Mitchell at 14:43 No comments: 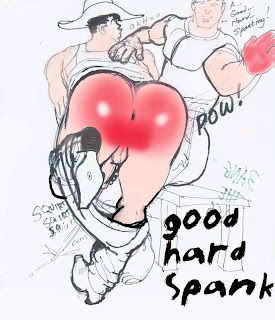 I don't know about art but I think this picture, attributed to Roan, encapsulates pretty well the homoerotic excitement of real man spanking. I love the glowing red palm (you can imagine the warm sting) and the even hotter(!) area where he has focussed his attention.This is a one-off as far as I know, I don't have a site reference for Roan and would welcome information about him from readers.

Posted by Mitchell at 09:31 No comments: 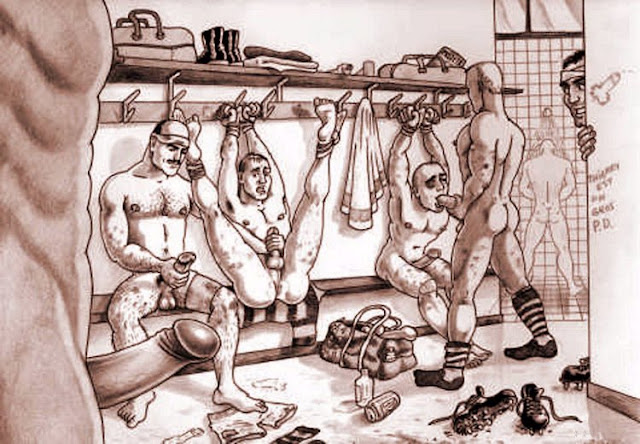 Riton is a French artist who has published a lot of art there in comic form and in the French language of course (mais oui!) both of which probably limit their circulation, but he deserves wider recognition. My first example, bondage in the dressing room, is moderately well known and regular readers will spot my interest in rugby surfacing in this choice (Rugby being one of the few enthusiasms we Brits are happy to share with our near cousins!).

It's quite a complicated composition with a range of field-depths and although the perspectives go a bit bananas on the seats and shelving it's visually interesting and tells a fascinating story. Apparently this is a post match debriefing/initiation and the format is clearly not unusual in this dressing room!

This picture of a man fleeing through a wood clad only in his boots shows the same sexy humour and some technical skill with awkward viewpoints. I love quirky images like this. The bare trees, falling leaves and splashes of mud create a desolate setting, cold and wet adding to his naked discomfort and by implication, underlining the fear which is driving him through it. 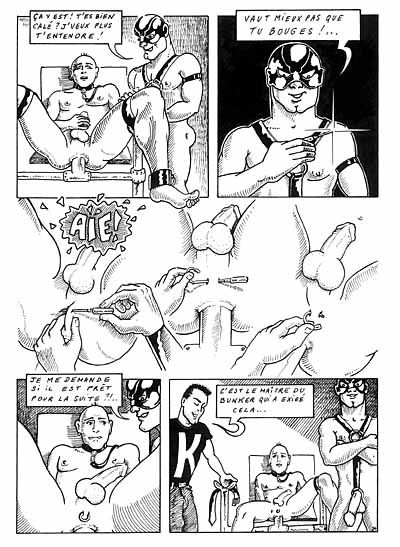 My final example is taken from the comic strip 'Le Bunker' in which a young man, Gabriel, offers himself for extended S+M training in order to enter the service of 'the master'. It's a long series of 24 pages, so this single example scarcely does it justice but it does give you a flavour of the piece.

Each page features a different sexy test for Gabriel starting with a forced confession of past sexual excesses that could only have been dreamt up by someone from the Catholic tradition. In this frame, the unexpected forced piercing in an unusual, intimate place is a great domination moment - I love the squeal of pain!

The speech bubbles play their part in creating the bunker atmosphere but inevitable the language used is full of colloquialisms and naughty words that easily defeat automatic translators. I have attempted to translate this page (below) as best I can but had to guess at the word exies' in the final frame.

Naturally, the humourous comic book style dilutes the S+M element (probably to satisfy a publishing constraint). Gabriel seems to endure his succession of humiliations and punishments with a good humour that is rather disappointing, but nevertheless, for those with imagination it builds up into an impressive saga that stands comparison with Leo's work 'The Estate'.

I don't have a site reference for Riton and would welcome information about him from readers.

Posted by Mitchell at 13:52 No comments: 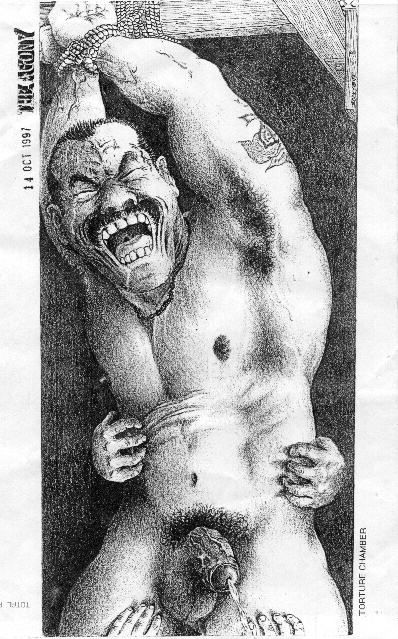 I have a couple of pictures by Rico dating from the late nineties and both showing a mature man, tied up and being tormented by the hands of unseen captors. At first sight it has the appearance of a caricature with the man's face enlarged and distorted, but in reality it's highly realistic, if not very pretty. The binding of the wrists looks inescapable and his slightly fleshy body is sensuously depicted, squirming under the attack which is serious enough to cause him to loose control. I expect the moustache is a bit of blocker for some, but I would love to see more of this artist's work.

I don't have a site reference for Rico and would welcome information about him from readers.

Update Aug 2018, Thanks to  the reader who identified this as a tickling image and supplied a link for other examples (see comments below)

For other articles in this series click on the A-Z label below or use the search box to find a specific artist
Posted by Mitchell at 11:11 2 comments: 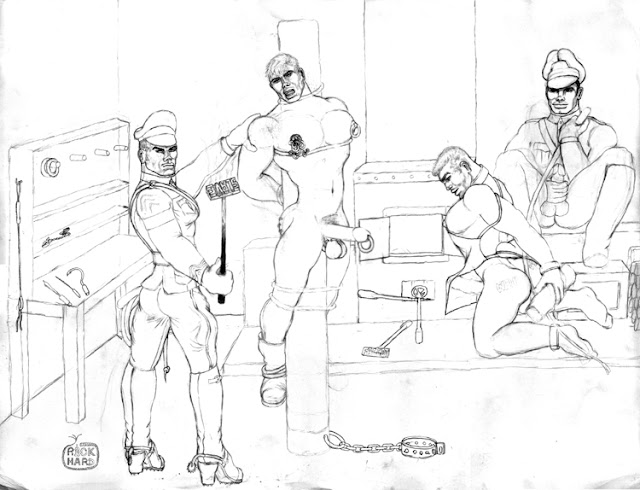 Rick Hard - Branding Dungeon
From Rickard to Rick Hard (aka Rick Von Sodom, I believe). This torture tableau is a good example of his work. The fascist uniforms and the array of crude torture weapons on the side table would have been more chilling in their own day than they are now. The participants are rather disconnected and look out at us as though caught in the act or posing for the artist - perhaps the cruellest torture of all!

I don't think I've featured a branding picture before but I wouldn't recommend this as a guide to technique, branding a captive on the buttocks while he's tied to a post is one of life's more impractical tasks. Perhaps that's why he seems to have applied his brand upside down! I like the aproned slave feeding fuel to the furnace while being aroused by the second guard's whip sliding between his ass-cheeks, note this guard's penis-shaped cap.

Rick Hard's style is fairly basic but the rendering of the faces and the uniform detailing show a hand not devoid of talent. The subtlety of his shading has been washed out of the scan above and is better in the other pictures below. The Nazi style uniforms and facial style suggest a date around Tom of Finland's heyday, in fact the prisoner tied to the post is very similar to Tom's 1963 image in which an engineer is tied to a telegraph pole by bikers (below). There's a touch of 1960's artist, Luger (Colt), in the legs-up pose of the right hand guard. 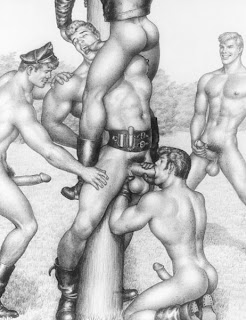 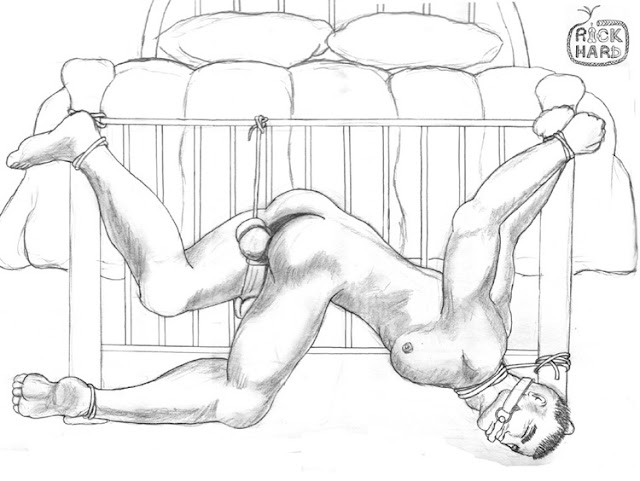 The black humour lurking in Branding Dungeon can also be seen in this rather expressive picture of a prisoner awkwardly tied to the foot of a (neatly-made!) bed. Men in humiliating domestic predicaments feature in other pictures by Rick Hard too. 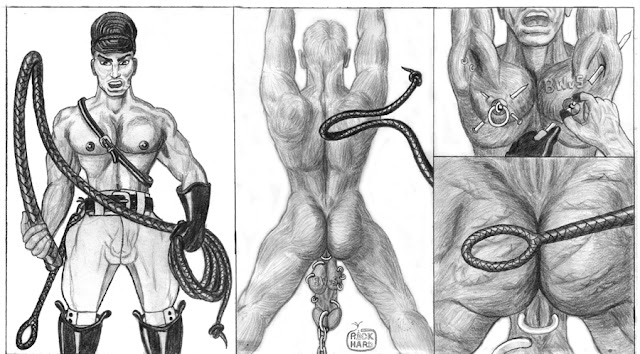 Rick Hard - Tryptich
Back to the dungeon. This guard is a caricature with a cruel almost feminine face thanks to the almond-shaped eyes and strange peaked cap. His body is muscular but that takes second place to the prominent billowing uniform, all carefully detailed, even the piped edges are shown on the gloves and boots. The muscular young prisoner is lovingly drawn using a curious shading technique which suggests body hair in places but also recalls depictions of blood vessels and nerve paths in anatomical drawings and it's all slightly disturbing. In the final section his beauty disappears and he becomes gaunt and agonised under the guard's torment. I'm not sure if this is erotic or a moral tale.

Finally a guard descends into the dungeon and holds out his crop for the grovelling, naked prisoner to kiss. The guard's casual hand-in-pocket pose shows he is in total control and has no fear of being attacked. It's a simple but rather effective depiction of casual intimidation and fearful submission. In the context of the other drawings showing severe torture scenarios it's all the more threatening but fortunately the penis-shaped cap reveals the true purpose of the encounter.

For other articles in this series click on the A-Z label below or use the search box to find a specific artist
Posted by Mitchell at 09:46 No comments: