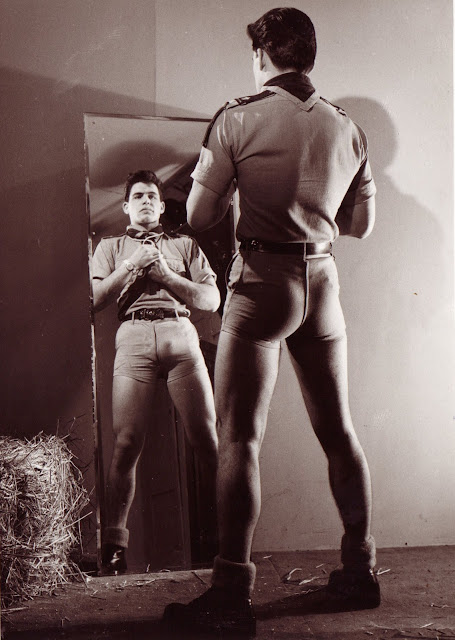 I don't know the original sequence of these images but I've placed one last because it's my favourite. The combination of front and rear views utilises the good, old, Royale, mirror technique. The lower viewpoint makes the model's proportions look more balanced and natural and the reflection of the lower body gets an extra lift from the angle of the mirror. You can see below how much the impact of the image is enhanced with more modern, tighter cropping. 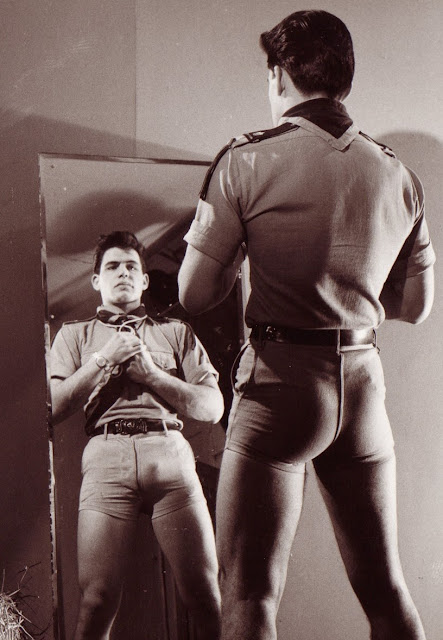 For sharp-eyed pornsters, the 'bulge' reflected in the mirror now appears to be pointing directly outwards towards us complete with slit. I'm not 100% sure that this is an original effect but it's pretty convincing. In Royale's time, pre-Photoshop, this would have taken some doing, either by manipulating the original lighting or by rephotographing an altered print or negative. For other examples of hidden eroticism click here.

For previous articles in this series covering 'Royale Studio' and 'Guys In Uniform' click on the GIU/Royale label below.

Posted by Mitchell at 08:48 No comments: 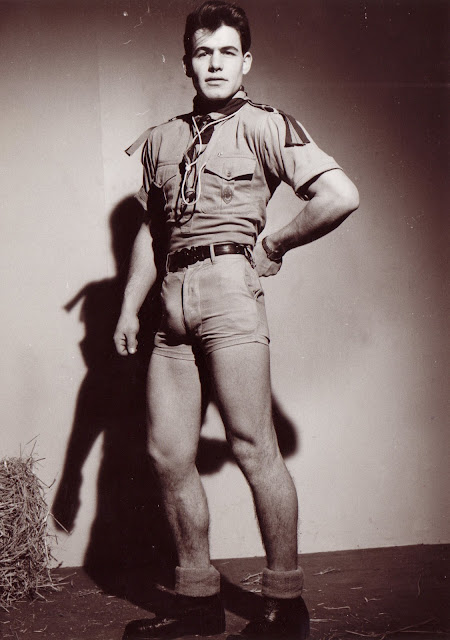 The dreaded hand on hip pose is never far away in male beefcake shots but this one provides another opportunity to study the revealing contours of that impressive bulge and the model's meaty legs. His head seems curiously oversize in these frontal shots making for a very strange effect.

It's hard to know what to make of this imagery across a space of 50 years. Despite the boyish subject matter, there's no sense of anything under-age here. Royale commonly depicted spanking situations and used uniforms to invoke ideas of obedience and control, but discipline was virtually non-existent in the Scout movement, it was a voluntary, leisure pursuit - so I doubt that connection is being made here. The air of authority in this picture makes me wonder if we are looking here not at a Scout, but at a Scout Leader. In those, unreconstructed days, Scouts and Scout Leaders were often the butt of jokes about unsavoury activities around the camp fire - along the same lines as boarding school dorm jokes. I suspect these images were intended to appeal to men who relished that fantasy - of being seduced by the handsome Scout Master - over that handy bale of hay, no doubt.

This model appears in other Royale sets where he looks a good deal less intimidating than this. I've not yet been able to name him. Any info from readers would be welcome.

Posted by Mitchell at 08:41 No comments:

Royale Studio No18 - The Scout part 2 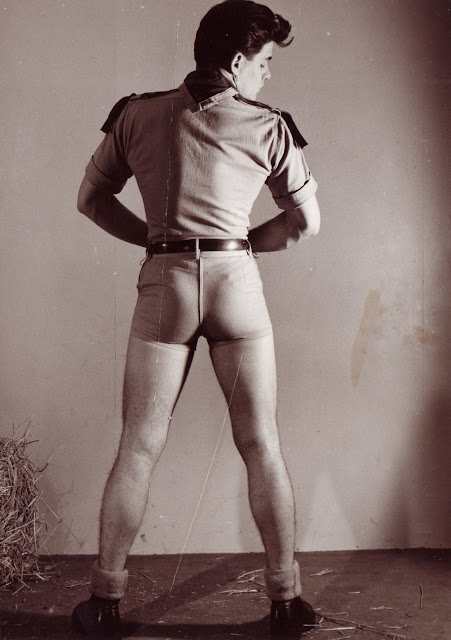 In this rear view, the model looks more youthful, with an attractive kiss curl detached from his fashionable quiff, in the style of James Dean. From behind, the tight clothing works on a slightly more subtle level as he appears to be assessing whether it makes him look more sexy. There's a sense here of an adult recapturing the thrill of adolescence and of schoolboy memories of desire for sexy, older boys.

The tight fit of the clothes in these pictures is not just down to a man wearing boy's clothing, the whole outfit has been completely re-tailored to achieve this effect. The sleeves and legs have been shortened of course, but the seams of both shirt and shorts have also been taken in. This has produced the non-standard 'wasp waist' on the shirt and shows even more obviously in the unusually prominent, rear trouser seam. Alterations to produce a sexier fit on the model were the norm at Royale Studio, the sewing machine must have been red hot at times! You can see too that it's been immaculately ironed.

For previous articles in this series see preceding post. For other articles covering other 'Royale Studio' and 'Guys In Uniform' pictures click on the GIU/Royale label below.
Posted by Mitchell at 10:38 No comments:

In the last couple of posts I made a link between Boy Scout imagery and the famous Royale Studios that produced military erotica in the 1950's. In fact Royale used the Scouting theme on more than one occasion. The normal age of Scouts puts them well out of bounds for the purposes of erotica and rightly so. Fortunately, Royale used models for their Scout series who were indisputably adult and the one in the set below is not remotely boyish. 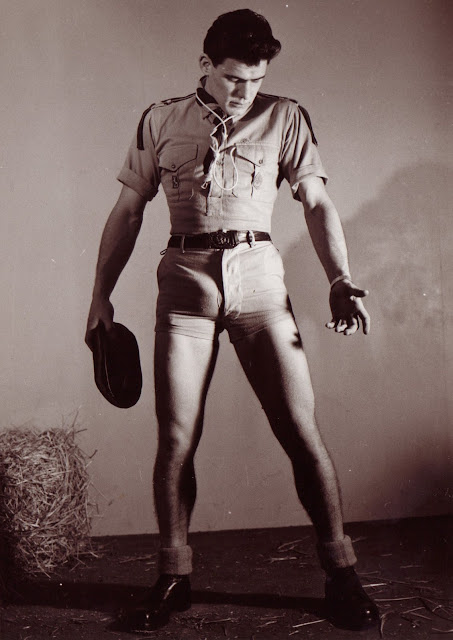 I only have 4 pictures from this set but I imagine there were probably more. The Scout shirt and accessories from the waist upwards look absolutely genuine but it's hard to tell if the shorts are. Royale always strove for authenticity in it's uniforms but the effect is marred here by the socks which would not be rolled right down to the ankle but would be worn long and turned down just below the knee, like rugby socks. I'm not sure about the beret in his hand, bush hat headgear with a pointed, tent-shaped crown was often worn by Scouts in the UK.

In the jokey fashion of the day, the model is depicted as being bewildered at having to wear this unusual outfit. These days fashion models will wear any ridiculous clothing on the catwalk, but in the Royale era 'men were men' and to be asked to dress as a mere boy would be pretty demeaning. Having put the clothes on, the manly bulge revealed in his shorts would be equally disturbing. We can assume this man has shed such inhibitions, but the Royale liked to play with the idea of the photographer's power over his model, knowing it would tittilate more conservative viewers.

Bulges in pants were not unusual, Scott studios were also notable exponents, but this one is particularly explicit in shape. It hardly counts as 'hidden eroticism' but a close inspection of the shadowing reveals just a hint of cockhead.

For previous articles in this series covering 'Royale Studio' and 'Guys In Uniform' click on the GIU/Royale label below. 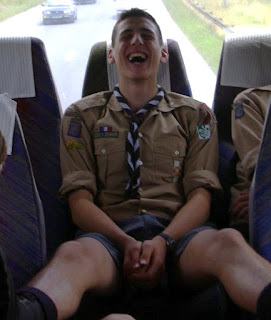 Pursuing the scouting theme, I found this picture on the Boys in Short Shorts blog, which has a quite a collection of scouting images and some surprisingly short shorts that rekindle memories from adolescence. 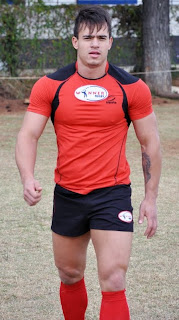 This splendid rugby player comes from the same source.
Posted by Mitchell at 10:12 No comments:

Those of you who follow my periodic posts of 'Royale Studio' work from the 50's may do a double-take seeing this picture which captures many characteristics of that era. Open shirt, short shorts and pouty model sporting a sexy kiss curl, but it's a brand new picture. 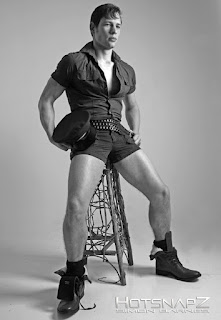 Skimpy shorts like these are a rare beast these days but when filled with chunky thighs they have always been a big turn on for me. 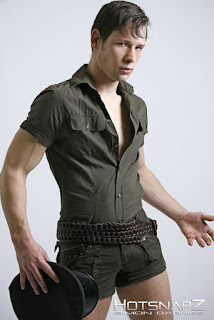 In this softer pose the outfit acquires something of a 'Scout-y' flavour. Ready to earn a few badges? I've always thought a Brigade of Man Scouts like this would attract an eager following for Church Parades. As a form of community service for older male delinquents it would be very popular and might even do them some good.

Photo's of Marco Solvo, courtesy of Simon Barnes' Hotsnapz
Posted by Mitchell at 10:12 No comments: