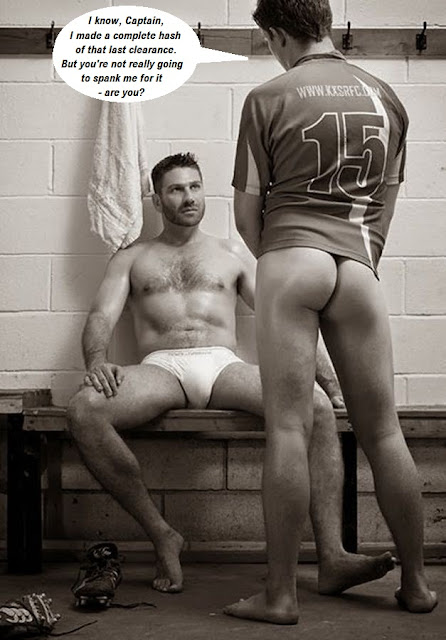 Mitchell is away on a break until the end of June
Posted by Mitchell at 08:05 1 comment: 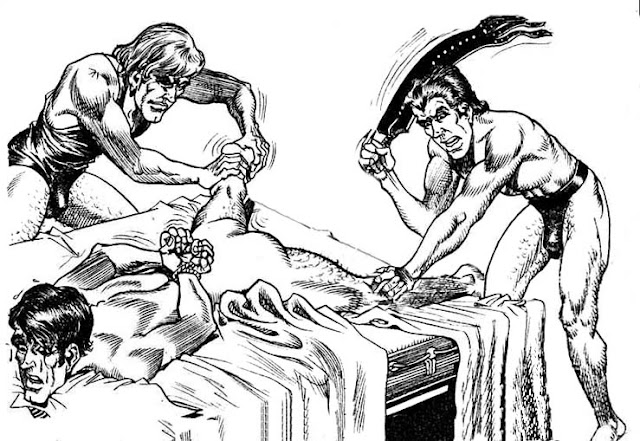 1
Today's artist is one whose work you may have seen in spanking collections without being aware of his name. I have seen some of these images listed as being by 'Johnson' but I don't know if that moniker has any truth behind it.  This one showing a man being held down on a bed and subjected to a severe belting is quite well known. One is immediately struck by the angular, serious faces and somewhat scrawny-looking limbs which suggest realism rather than idealisation was the objective. This is the exercise of power and control rather than mutual pleasure, a stance which to some extent may be accounted for by the censorship restraints of it's time - the luxuriant hair styles position this piece around the 1960's. The parallel lines method of shading of the muscles is also typical of this time, you will see it in early 'Superman' comics. 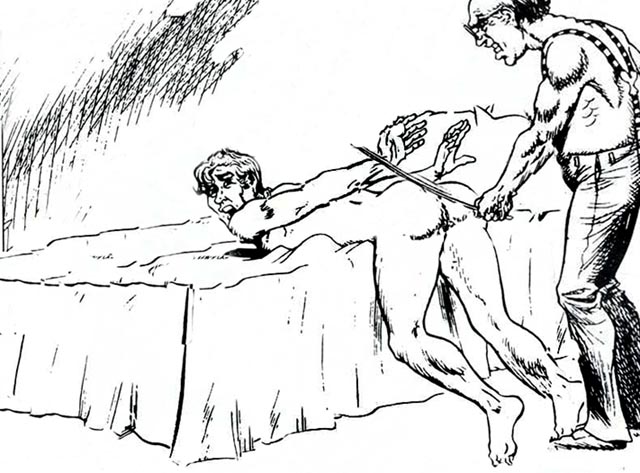 2
Humiliation and punishment is the name of the game in this piece too. The younger man is no boy but he's being caned in the nude for some misdemeanour by an older father-figure type whom the artist has characterised as old, unattractive and slovenly. It's a case of 'you may not like me but I'm the boss'. 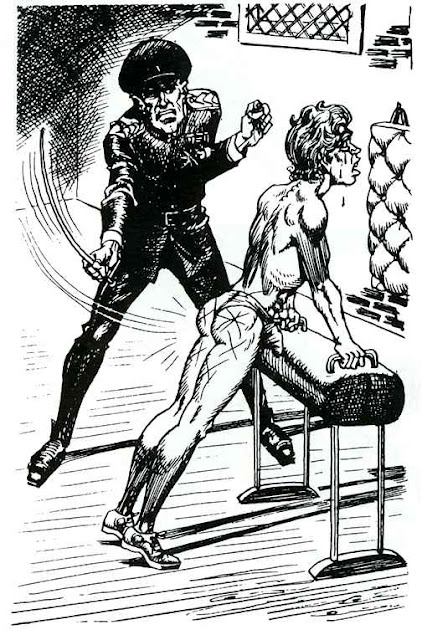 3
The idea of a punisher whose power does not derive from his own personality is encapsulated here. The fascist-style uniform is not intended to make the him attractive, just more powerful. His lean build and awkward pose conjure up a sense of doubtful motives too. There's an intensity to the thrashing and the victim's pain which is quite stark and uncomfortable, but this time there is a mild suggestion of eroticism in his hitched-up shorts and revealing projection. 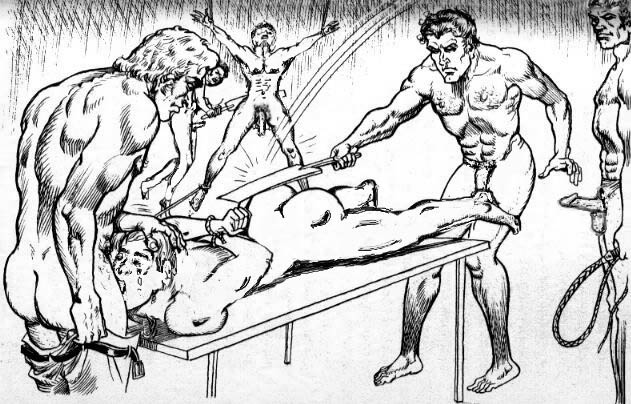 4
In this example the artist seems to come out of the closet and shows us the punishers seeking enjoyment, but if you look at the enlarged image you can see that every penis  has been clumsily added by someone else and the paddle-wielding character in the background barely seems male.
The angle of the table victim's head has been changed too (look at his ear area).
Only the lowered trousers in the foreground  have a degree of authenticity,
admitting sexual pleasure as an element in the picture. 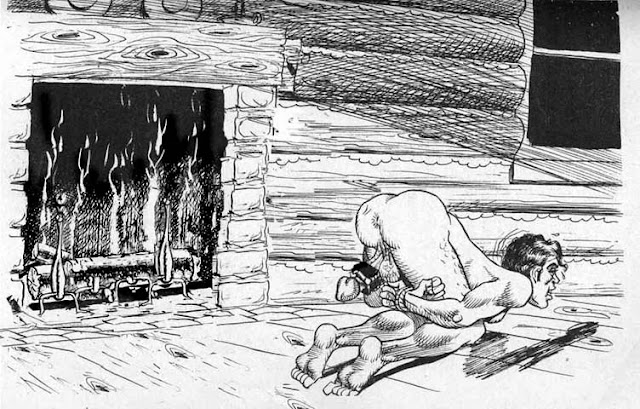 5
I find this final image intriguing not least because it chimes with the part played by the fire in my Christmas Criminal series. The brightness (and heat) of the fire which would normally radiate out in every direction is shown as focused downwards on the victim's upturned ass. This shows no signs of having been spanked, suggesting this might be a tenderising prelude for him (as in Christmas Criminal). The inclusion of a hole and pucker looks original and makes this a homo-erotic pose in anybody's language but there has been some tampering in this area. The seams of the planking just to the left are not continuous with those on the right and you can see a couple of vertical joins where something has been pasted in. The strange chunky device attached to his cock actually looks a bit like a hand on close inspection and further afield the knot-holes in the floor in front of the fire are clearly replicated. The alterations around the captive's body have been quite skilfully disguised but this image is not a very useful guide to Ward's art.

However this hetero-predilection and the evidence of tampering in some of these pictures makes you wonder about the authenticity of all of them. The mysterious hand in picture 5 could easily be a woman's. In picture 4, there's a figure wielding a spanking paddle in the background, but take away the penis and is it really a man? Is the person on the table a man either with that bottom?

In picture 2, the composition is oddly unbalanced and there is a blank area above the victim's back. It's obviously a double bed, you can see two pillow corners just by his right hand, but the further pillow is incomplete. I suspect that there's a lady that has been edited out of this picture and it's her father administering the punishment. This also explains the young man's nudity, caught in the act!.

For more articles in this series click on the A-Z label below or search for specific artists using the index page or search boxes (top right)
Posted by Mitchell at 10:21 No comments: