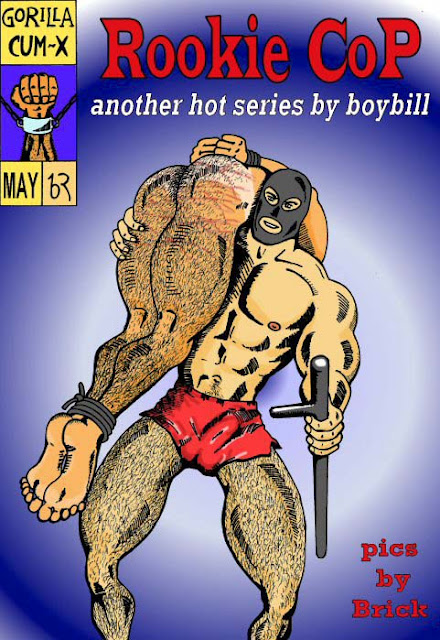 'Rookie Cop' starring the unlucky Officer Ricci, was one of the products of Brick's extended collaboration with writer 'Boi Bill' aka Steve McHalperin. If you search Brick's work you'll also find images he produced for other stories by the same author 'Brick and The Mad Scientists' and 'Russian Reform School' (RRS).

Those of you who have read my articles drooling over military shorts won't be surprised to see this example of Brick's work here. Brick has an eye for sexy clothing. The bulging hairy thighs are just part of this man's armoury of intimidation. This is a detail of a larger image showing two naked grunts, with one transporting the other in a cage.

Another hunk being carried. In this image Brick blends the menace of Military authority with the more sinister undertones of rubber wear. We get a glimpse of what awaits the cute captive inside. The gagged and blindfolded victim is only able to guess, but at least he gets the comfort of human contact while he's on his way.

This prisoner doesn't even have that. The are similar elements at work in this picture but Brick's imagination has taken flight with the prisoners intimidating garb and transportation arrangements. If you've ever had a fight with a supermarket trolley you might wonder if this 3-wheeler would make the porter's life any easier. It's apparent instability may be part of the prisoner's ordeal of course, but I think we can assume that there's  a hidden plug to prevent him toppling off. I imagine most men in a captivity situation might take some persuading to provide enough dick for a decent grip. 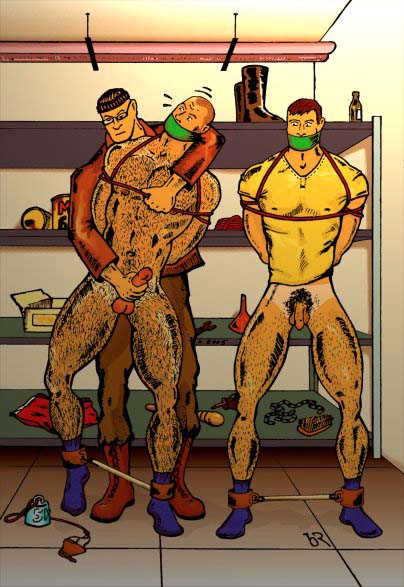 Brick also uses the threat of what is about to happen in this picture, it's being revealed to one horrified captive and demonstrated to his comrade who is the next man in line. The array of implements on the shelves behind them hint of much more to come for them. I wonder whose shorts are they? The yellow shirt hints that these two have just arrived from the normal world outside - their captors garb suggests they might be a pair of hapless hikers who took the wrong path. Brick places his characters in locations so that the viewer can imagine a story not just the enactment of a fetish.

This picture perhaps answers the question about the red shorts and reveals more about the nature of the prisoners ordeal. A paddling is about to resume after being interrupted by a breakage which tells us the punishment is heavy and protracted. Notice the pink highlight in an unexpected place on the prisoner's torso. The captor's uniforms tells us that this is an institutional process, impersonal and unstoppable. Being forced to wear brief red shorts (like the rubber gear in the trolley picture above) is part of the process of compelling submission. The row of rubber-shrouded prisoners parked behind makes it clear that paddling will not be the end of the story for this prisoner. 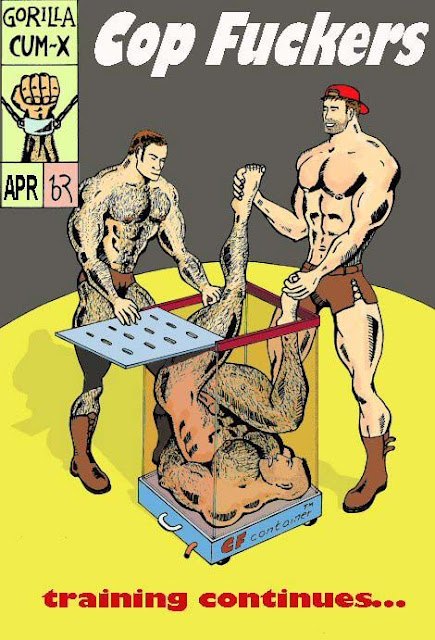 We're back with the Kidnapped Cop here. He's being stored and punished in a glass box barely big enough to contain him. The holes in the lid and drain tube at the bottom hint at some sort of  watery ordeal in the offing. For me however Brick's image brings out most convincingly the sheer humiliation of a strong man being compelled to accept degrading treatment. In other images by Brick the punishment boxes take the form of cages, fridges, hot cabinets and even ovens.

Humiliation is also the name of the game here. Bricks men are always tied up, even when being marched around and the bondage here is designed to make walking difficult and undignified. The prisoners are not even allowed to clean themselves in this prison. The non-conformist hairstyle hints at a reason for this man's detention, it's rather more subtle than simply being punished for being hunky or being a cop. 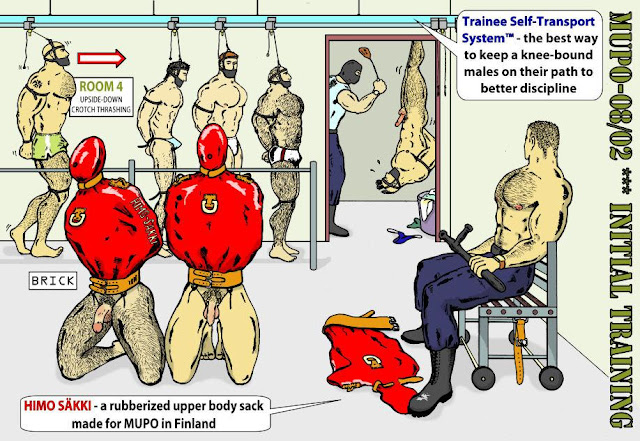 This picture sums up many of the qualities I have mentioned above, hunky men, humiliating transport, sexy clothing, painful punishment and loss of identity in a pseudo-institutional process.

Brick's pictures look like coloured cartoons which gives a sense of lightness and humour, but the underlying subject matter is not funny at all. You might guess that his Eastern European background influences what he draws. The pictures have an uncanny power to make you linger and fantasise about what is happening. Their effect is lifted by the details of the faces, body hair, clothing etc. It's more varied and sophisticated than mere cartoon imagery. He's been described by his collaborator as labouring endlessly over his pictures, we can all be grateful for the results.
(Updated Jan 2019)
~
More Brick at mitchmen: Brick and the Mad Scientists , New pictures by Brick notice

Brick is an elusive artist on the web, he has no website of his own as far as I know, nor even a favourite posting place since Greasetank's demise and his name is not as unusual as you might imagine in gay circles! He has recently (2022) produced a number of new Slave Academy images which you can see at Metalbond and there's now a good collection there if you search on his name. I have also produced an Index of these 2022 Brick new releases.
You should be able to find more at GMBA (current link is at the foot of the right sidebar if it's been zapped again by Google since i wrote this).

For other A-Z's click on the label below or visit my artist index page in the tabs at the top.

is there any way to see more of his works?

Brick has appeared on a number of sites in the past but sadly they have all now closed.
I am hoping to mount an exhibition of Brick's work at my Yahoo! group this year, watch this Blog for announcements.

Are you planning to upload something about Brick? I remember how his works were hot and searched on the web in vain. I thought he was also a good writer always made me hard. Looking forward to your posting.

I still hope to mount a tribute to Brick, probably at the Yahoo Group not here. There were some postings a couple of months ago at Roids'n'Rants (link in sidebar). He's not doing new work any more as far as I know but if you join GMBA2 and ask the question you'll get plenty of examples.