Mitchell's A to Z of Fetish Artists - Boundex 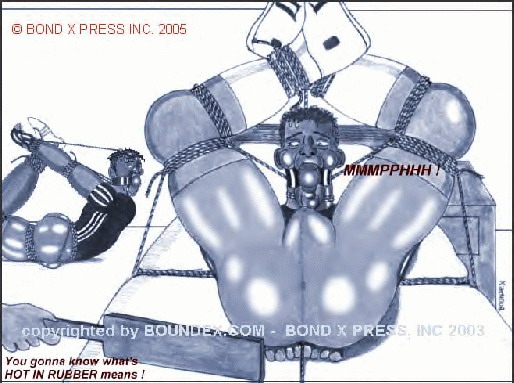 T
he Art of Boundex typically shows images of men, often skinhead types,
who have been tightly tied up, gagged and suspended.


Sometimes they are depicted in skinhead clothing - Adidas tee shirts and jeans - but often they are clad in tight fitting lycra or shiny rubber suits which are depicted in a sensual way and create a strange effect of nakedness and vulnerability whilst clothed. These male bondage situations are bought to life by little side comments or exclamations muffled through gags conjuring up fantasies of revenge, abduction and punishment very much in the 'mitchmen' style.

For more examples visit http://boundex.net/
Posted by Mitchell at 10:27

I completely agree. The big round buttocks clad in shiny, skintight spandex and rubber are begging to be made into bongos. And the helpless faces above the huge gags. Very hot.

I was totally aroused as soon as I looked at these tightly bound,tightly gagged helpless guys ! It's the type of bondage I would love to experience myself ! Beautifully imagined and drawn !