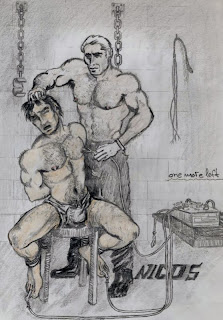 Nicos - One More Left
Nicos (Nikos) has produced a small selection of drawings depicting dungeon scenes. Prisoners in shorts are being prepared for torture, which can be a highly erotic subject. The absence of total nudity is no drawback, it adds a touch of realism. In the example here, he brings out the fear of the prisoner while the torturer is impassive, slightly puzzled it seems. The picture abounds with interesting detail - the body hair, feet etc are very satisfying - even the electrical clips are carefully shown. I like the way the electrical leads track across the bottom of the frame, it's a stylish touch.

Nikos own site has disappeared (July 2013) but you can see his work in the archives at GMBA (current link in sidebar).
For other articles in this series click on the 'A-Z' label below
Posted by Mitchell at 09:38 3 comments:

The examples I have of this artist's work fit into the skinhead/rubber boot genre. 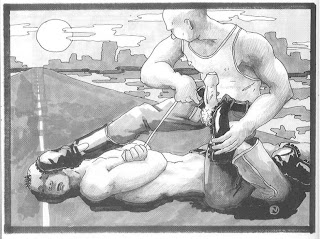 The style of this drawing is most interesting. The figures are drawn with bold, careless strokes but the depiction of captor's hands and outstretched leg show a command of anatomical proportions. The highlighting of the bodies meticulously accords with the position of the setting sun and is particularly effective on the singlet. The art deco style depiction of the clouds and distant mountains underlines the artistic intelligence. 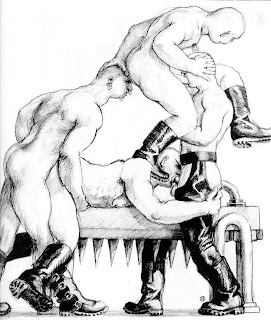 The orgy scene is not dressed up in quite the same way, the emphasis is on sensuality not situation. The use of the shaved head for butt rubbing is a novelty! However, the exaggerated boots and bizarre spikes underneath the bench create a similar sense of hidden malice. The enthusiasm of the participants is captured with the help of slight bodily distortions but the same, casual strokes disguise a skill in interweaving bodies which is quite hard to achieve without creating a confusing jumble of limbs. The prominent thick-soled, chunky boots are beautifully depicted and there are a couple of nice hands. In this image, with it's boots, steely, determined faces and blurry, hatched shading, Nicolas almost conjures up the ghost of the artist, Les (see earlier article in this series).

Posted by Mitchell at 10:37 No comments: 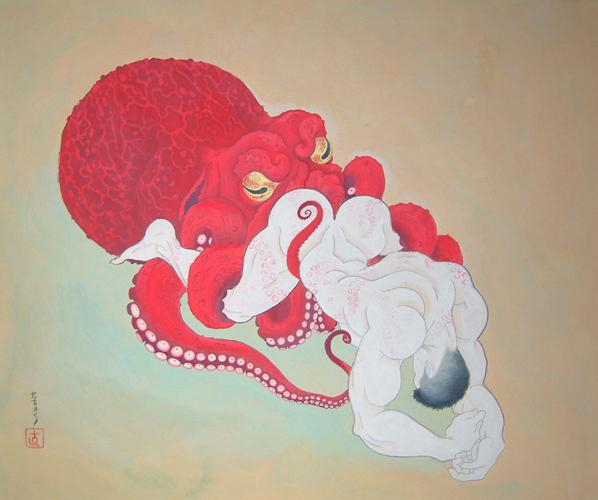 Naomichi - Octopus
.
This is the only work I have by this artist but it's an oustanding one. There is a fairly well known Japanese print which depicts a woman being 'devoured' (in a sexual sense) by an octopus or squid. It's often cited as a classic expression of female desire. This picture develops the dream-like subject in a homoerotic vein but is less inward looking. We cannot see the man's face but the pose suggests acceptance rather passion, his body is covered with weals left by the tentacles in the struggle to avoid this fate and it seems the artist is more interested in his conquest than the sensuality of the embrace.
.
At an erotic level, the man's smooth, muscular physique, dark cropped hair and opened legs excite interest while the octopus is suitably knarled and lascivious in appearance. The bulbous body of the sea creature which visually narrows down towards the head in a sort of teardrop shape creates the sense of a frighteningly large invasion but the facial expression appears to be contemplative and benign. The artistic treatment is no less interesting. The compact composition and delicate colours lift this image into the realms of art regardless of content.

There was a page of Naomichi's work at Rainbow Arts
but it has disappeared now
(Many thanks to the reader who provided this link)
For other articles in this series click on the 'A-Z' label below
Posted by Mitchell at 09:32 2 comments: 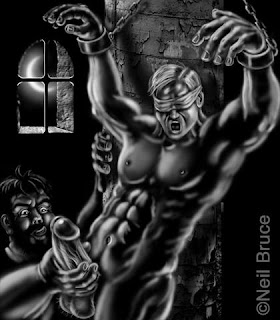 Neil Bruce - Moonlight
Neil Bruce's work is pretty well known. His distinctive 'nightscapes' created, it seems, entirely out of lighting effects, are particularly memorable. His pictures usually feature 'chubbies' acting in a predatory fashion towards more slender men, as in 'Moonlight' above. These pictures are created with the aid of computer airbrush techniques and you can see that the interesting background textures have similar origins but I have no reservations about including his work in this survey.

Artists usually create black and white images by shading darker areas but this is the reverse technique of 'painting' light areas. It naturally creates atmosphere and dramatic effect, in this case transforming a straightforward captivity cartoon into something rather more interesting. The humourous expression on the chubbie's face for example acquires a manic quality while the moon gleaming mistily suggests a distinctly chilly night for the naked captive. 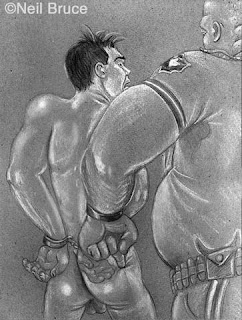 'Cuffed' features another chubby, this time it's a cop prodding his young prisoner towards his fate. This is a more conventional drawing but utilises similar highlighting techniques. The composition cleverly highlights the intimidating bulk of the officer by placing him in the foreground and picking out details like the bull neck, pot belly and shirt tight around arm. His neglected physique suggests we are in a backwater where the sheriff is boss and anything goes. The handcuffed boy is dwarfed by him and quails in naked fear. 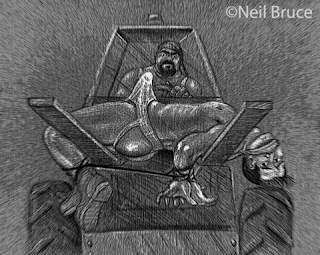 'Fork Lift' uses a melodramatic, Hollywood 'nightmare' scenario. The bear builder seems entirely plausible in this context but his anger runs counter to stereotype. The boy captive is sexily portrayed and I love the use of a jockstrap to highlight his erection which is firmly at the centre of the picture surrounded by a radiating pattern which somehow adds a sense of a rapidly unfolding drama. The cruelty and fear hinted at in many of Neil's pictures is stronger here (it sometimes becomes much more explict than this) but the unreal presentation defuses it for the casual viewer.

This is a good example of how the artist creates a convincing image with suggestion rather than explicit detail. The fork lift tyres, for example, seem realistic at first but the tread pattern is actually very simple. The 'rubbery' arms and fingers of the victim are another trademark style serving to lighten the drama. 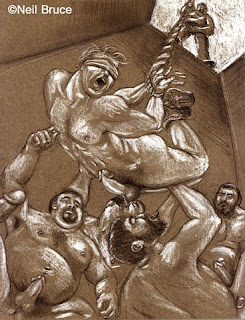 'Bear Pit' is a favourite of mine, the helplessness of the victim, removed from the real world and dangling above the chubbies who are presented as wild, voracious animals all serves to create a classic fear scenario.The 'threat' seems relatively benign but that bondage would be very painful in real life giving more than one cause for the victim's expression. The use of dramatic perspective helps create a memorable image. 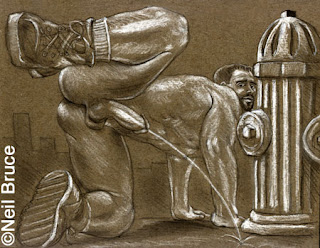 'Stray' brings us back to innocent humour and shows he can draw anatomy when he wants to. This is a much copied image but I give credit to Neil for doing it first. The absence of any hint of coercion makes it a comic, character statement and provides a legitimate excuse for depicting a view of the genitals which would otherwise be pure artifice and filth! Nice.

You shouldn't have any trouble finding Neil Bruce's work in gay art groups but you could start with his own site Bearotic Art which also has some interesting vanilla stuff.

Posted by Mitchell at 11:01 No comments:

I'm not sure how Nath66 creates his art but there is certainly an element of computer assistance in assembling and shading the image. I don't cover computer renders in this series but do include computer assisted work. However it is produced, the result is a rather clean looking image with simple, fine outlines enhanced by a limited use of shading to suggest bulk. Anatomically his men have youthful chiselled faces and highly developed pecs with a tendency to over-size buttocks and thighs. 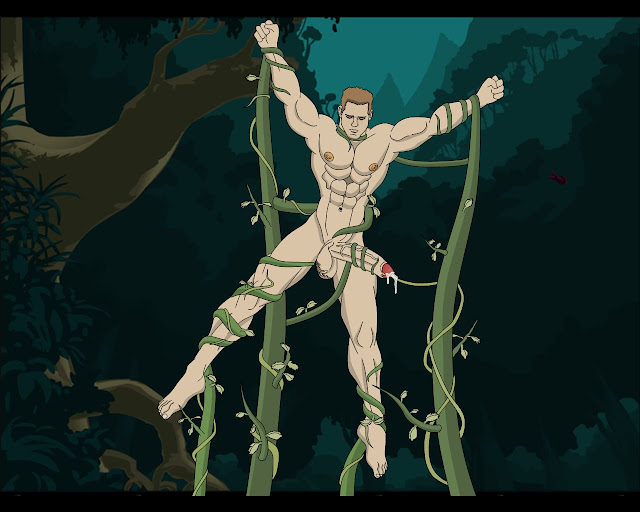 Nath66 - Tangled
In 'Tangled' he has utilised a dramatic, Chinese-looking, forest backdrop which is rather beautiful. The fetish interest here is the predatory flora, an interesting S&M manifestation of Sci Fi, linking of course to the eroticism of tentacles. The other notable exponent of man-devouring plant life is Christuffer who I should have mentioned under 'C', an omission I must rectify! Nath's plant is not particularly convincing as an organic entity, but the result is an attractive and entertaining image. 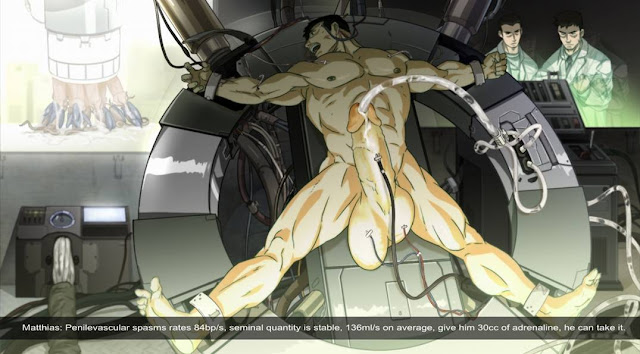 Nath66 - Lactating
'Lactating' is a much better picture although I have my doubts as to whether this is entirely the work of one artist. It shows (I think!) a captive being implanted with alien embryos - or possibly suckling them. The insertion technique is probably not scientifically sound but highly erotic! The helplessness and fear of the host male is beautifully captured. The set of the arms, the clenched fist and the turned head make the restraint convincing whilst the the claw like curling of the fingers and toes conveys something of the strange discomfort caused inside by his parasitic companions. The lab equipment is highly detailed and the technicians in the background nicely done. To me, the glow of the hidden computer screen and the reflection in the glass suggests a more accomplished hand than the simpler treatment of 'Tangled'. 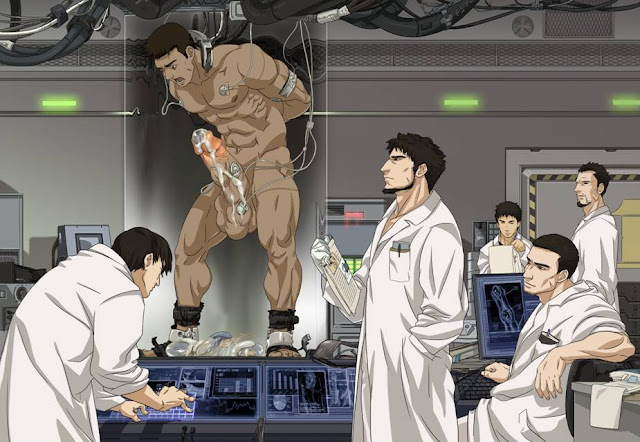 Nath66 - Sperm Lab
In 'Sperm lab' the human host 'lays' his eggs from a slightly puzzling standing position. They disgorge from his sperm-lubricated urethra - possibly with some electrical assistance. The tube enclosing him echoes the birthing scenario in a rather satisfying way, as well as reminding us of the isolation and exposed helplessness flowing from his guinea pig status. Again the lab surroundings are highly detailed, the technicians are captured in striking, realistic poses. The lab coat detail shows the power of simple line and shading.

This is powerful imagery that attempts to invoke a sensuality you can't see and which none of us have experienced. I'm not sure how much it succeeds, I suspect it helps if your adolescence is a recent event. But it's still sexy and imaginative.

See comment below for link information for Nath66
For other articles in this series click on the 'A-Z' label below
Posted by Mitchell at 11:06 9 comments: