Osamu's work is an uncompromising mixture of sex and domination embellished with magnificent cocks and agonised expressions of captive victims. Despite his Japanese name the faces of his protagonists, particularly the captives, are western in character as in the first example which is possibly his best known image. 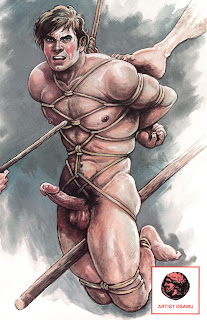 Osamu - Bondage Fantasy
I have called this 'bondage fantasy' because it seems to explore ideas of captivity and domination in a fairly abstract way without an identifiable setting or narrative. The captive's youthful swirl of blond hair seems curiously at odds with his chunky, mature build but Osamu's pictures always show adult males. 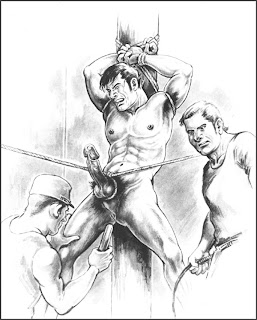 Osamu - POW abuse
The scenarios are often military in nature, with uniforms suggesting the torture of POW's from WW2 and further back in history. The activities depicted don't go beyond sexual abuse, but the staves and whips wielded by the attackers offer ample explanation for the unmistakeable pain in the victim's face. 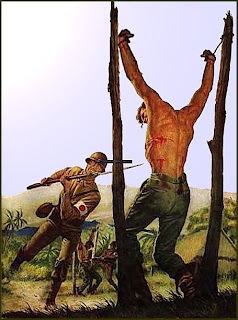 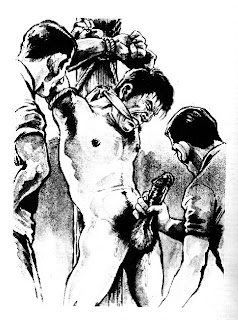 
It's the bondage element that is the central appeal of these pictures and Osamu has a knack for making the captivity look convincing, loaded with danger and humiliation for the struggling victim. The water colour based technique speaks for itself, it is accomplished (despite some anatomical oddities!) and typical of it's time.

I don't have a link for Osamu but would welcome information from readers, the archives of GMBA (current link in sidebar) are always worth a look. Good sources for Gay Fetish Asian Art in particular are Jeunes and Tagame. For those interested in comic depictions of POW scenes I recommend a visit to Aquadude's fascinating archives.