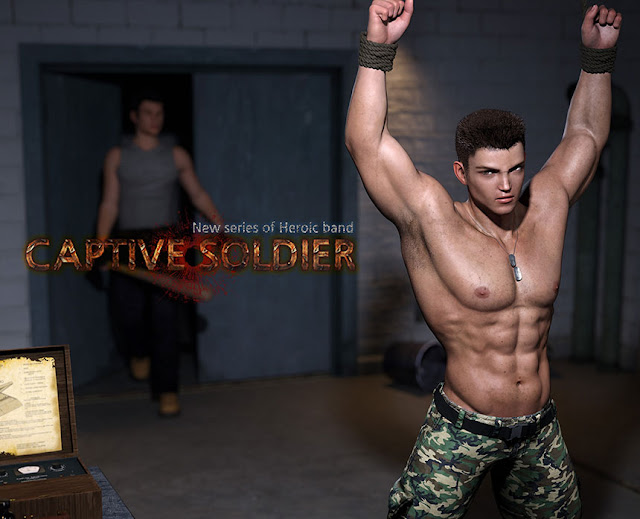 BrosFate is a CGI artist with a fetish bent that's a little out of the ordinary.
His most notable creation is Frank - The Captured Soldier (above).
He's a young man with an enviable physique and an adventurous job. 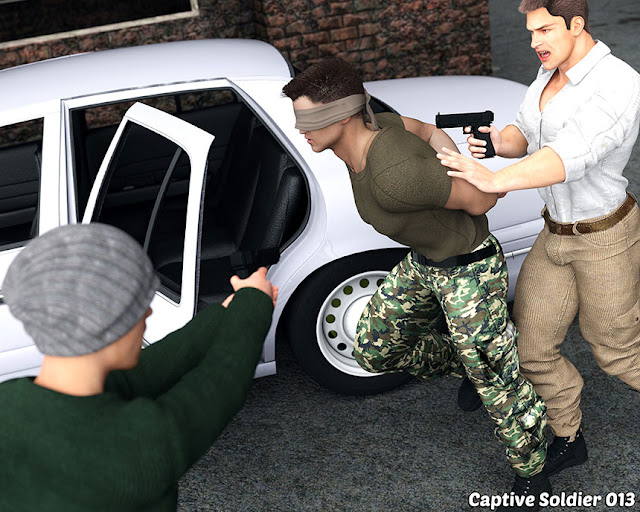 Frank's 'fate' (to borrow from the artists moniker) is to be sent on missions and captured.
The artist portrays the background to his capture in enough detail to tell a proper story
He gives Frank simple, military clothing which complements his fine physique.
As a professional soldier he makes a significant capture for his civilian opponents.

Clothing is often problematic for CGI artists but it works well in these images
The background detailing here is a little basic but the tilt of the picture is clever,
creating a sense of blindfolded Frank being pushed and stumbling forward.
. 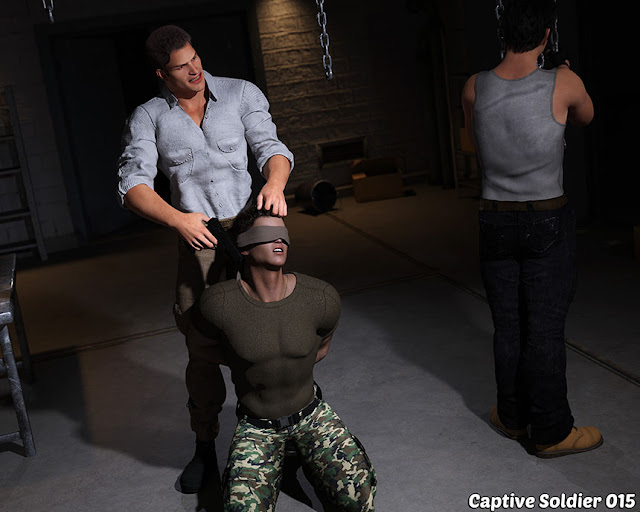 Frank is forced into a submissive kneeling position as they to interrogate him.
I'm never quite sure with this art-form just how much credit goes to the artist
and how much to the software resources he is using, but this is a good composition.
You can see that Frank (like us) is wondering what they are planning to do to him.
The tilt of the floor here sustains an impression of disorientation

BrosFate seems to have a good sense of how to manage his space here,
avoiding the CGI trap of placing characters in vast, empty halls . 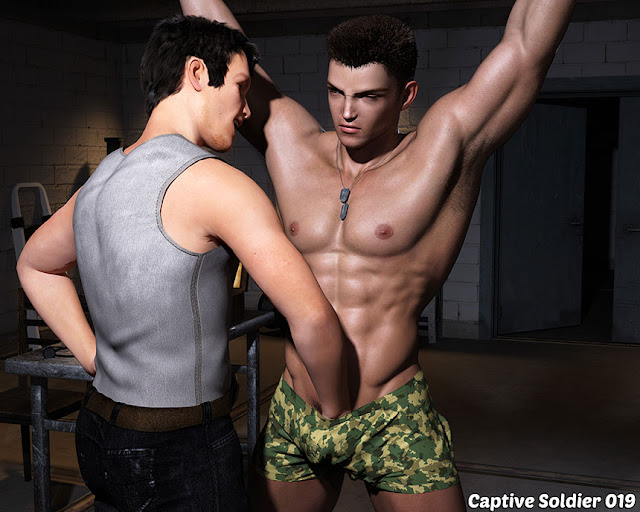 BrosFate allows the fetish situation to develop gradually, but he doesn't waste frames as padding
and rarely uses slow-motion sequences, instead producing a succession of unique images and some, like this one,are pretty impressive. He uses close-ups to good effect. The cropping here focuses our attention on the exceptionally well-rendered invasion of Frank's undershorts
and, simultaneously on the subtle, eye-contact duel that's going on.

Franks sturdy thighs are highlighted by the cut of his shorts which make a sexy side-dish for this feast.
This is almost the perfect illustration of what makes shorts sexy (from the front at any rate!) 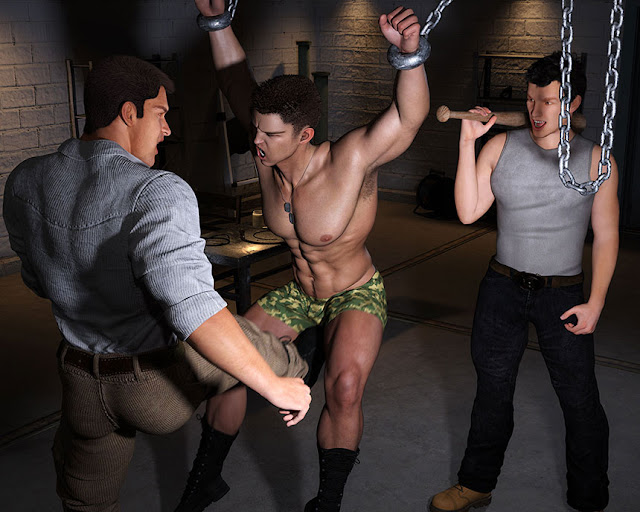 BrosFate characters use realistic coercion techniques, by and large he avoids resorting to leather dungeon cliché's like tit clamps and candle wax, in favour of less sophisticated forms of brutality

The buttocks of the kidnapper are a sweet detail here and the soldier's recoil convincing. 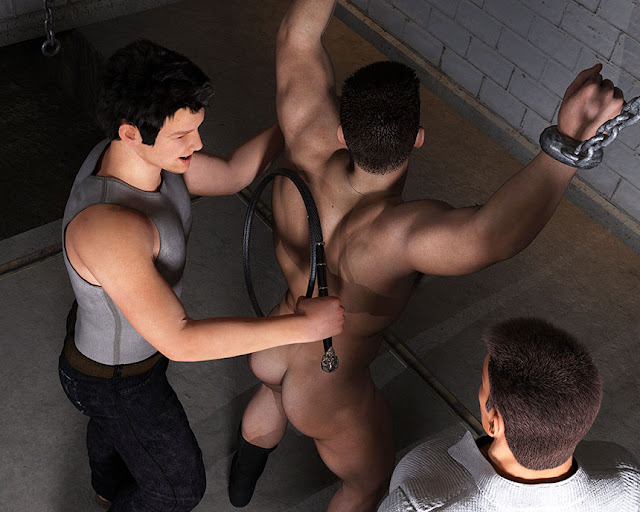 CGI artists are often beguiled by the ease with which they can create unusual viewpoints and BrosFate uses aerial ones a lot. There's a risk of creating distance and separation from the viewer with this technique, which then undermines involvement, The unfamiliar perspectives can look odd too.

However, this image has many virtues, not least a very sexy view of Frank's hair, shoulders and bottom.
The glimpse of boots still on his feet underlines his total nudity elsewhere. 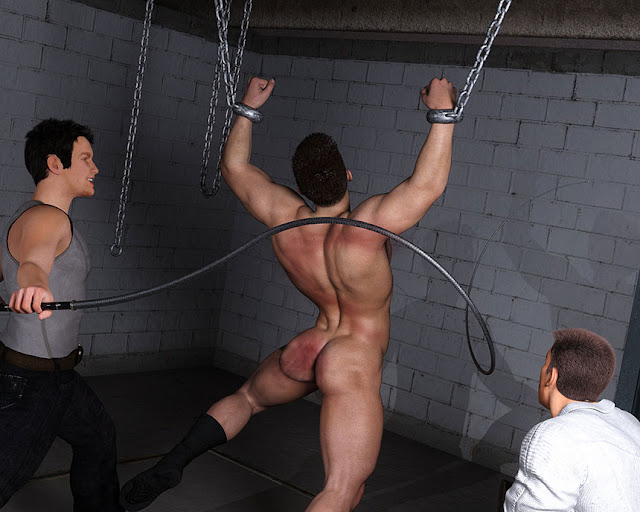 There's a marvellous sense of action and drama in this image.
The canted frame angle seems to reflect the wildness of the whiplash
and the prisoner's disorientation and disarray. 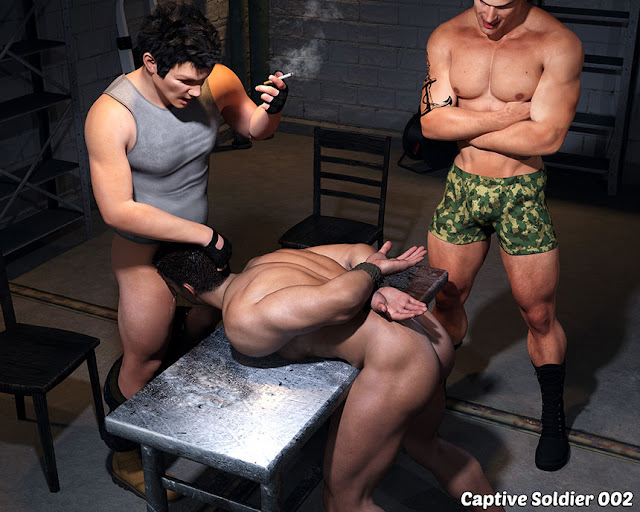 After that, there's only one option left - sexual and psychological degradation.
One of his tormentors seems to have donned Frank's shorts at this point
as though to demonstrate his total control and to deprive Frank of his military identity.
Let's face it, it's kinky too. 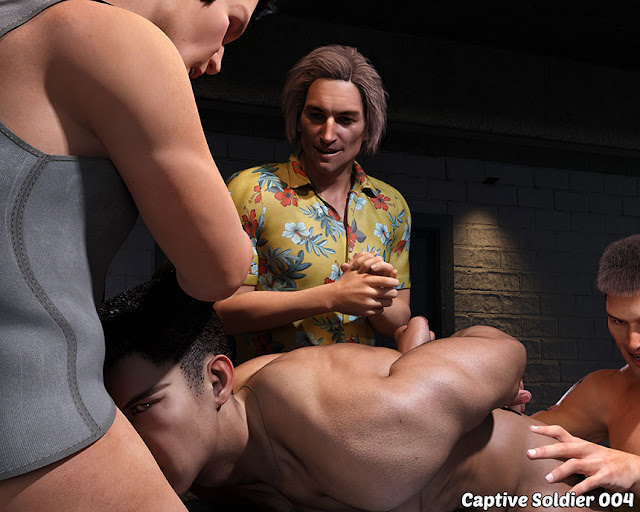 Compare this low level close-up with the preceding image and you see
how it captures the physicality of the interaction and Frank's resentment at it,
whereas the aerial shot emphasises his alone-ness and vulnerability at the rear.

The tight cropping here is brave. That's partly driven by a desire to create a 'vanilla' publicity image
but see how it seems to lift Frank's humanity and relegates the villains to to the sidelines 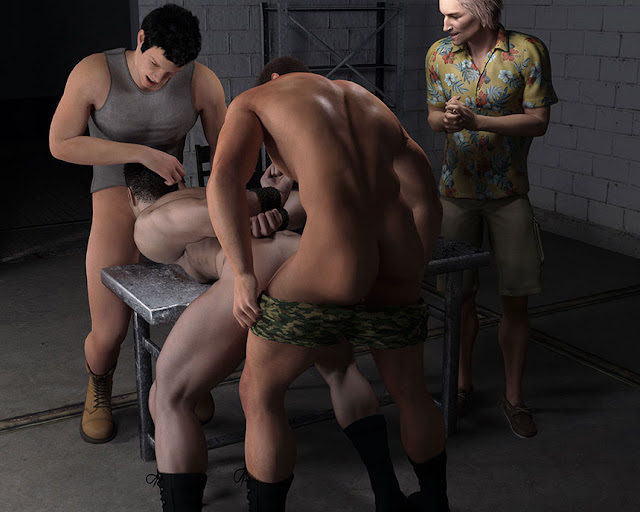 There's a sudden and bloody interruption, Frank's comrades burst in and shoot his abusers.
(having been summoned by the radio tooth implant - bluetooth?- in Frank's jaw).
He is rescued, but only so he can go through it all again on his next mission. 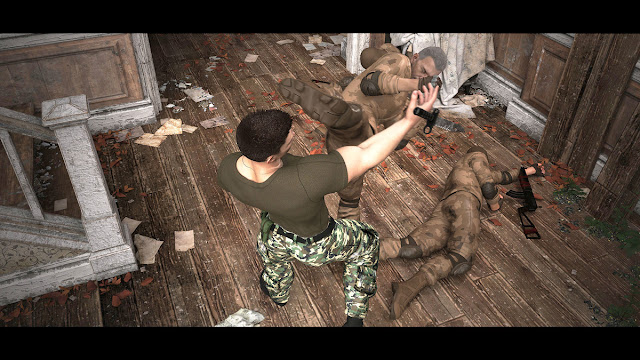 Frank is assigned to escort an important civilian, but loses his charge in an fire fight
(which is illustrated in comic strip detail, blood and all)
His pursuit takes him to this deserted house where he is attacked again.
He gives a good account of himself but meets his match in this kick boxing exponent.

This aerial image shows off Frank's shapely physique and cute bottom.
I think he looks great when he's dressed. 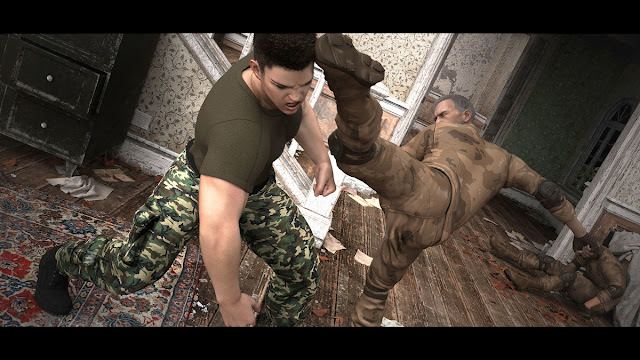 This lower, roughly eye-level viewpoint is more dramatic and draws us into the action.
It's a stunning dynamic scene. As narrative, it tells us a lot about Frank and his opponent's capabilities, which makes his capture a more significant event and his subsequent ill-treatment all the more intense.

I think some of the background detail and fighting poses are 'off the shelf',
but the artist has certainly made good use of the tools at his disposal.. 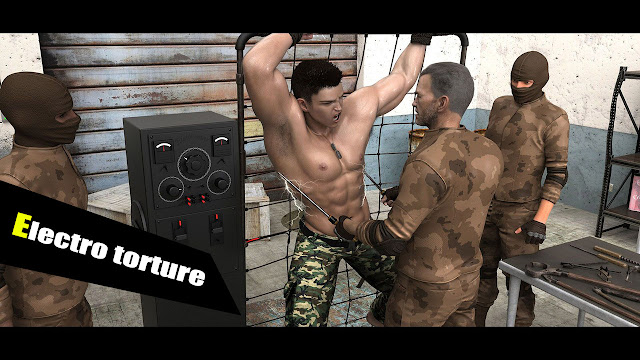 Inevitably Frank is tortured to reveal what he knows.
He writhes to the side to avoid the shock wands.

The low waist on his trousers creates a very 'exposed' effect at hip level,
it looks highly vulnerable to those nasty electrodes hovering nearby.
There's worse to come as the array of implements on the table indicates. 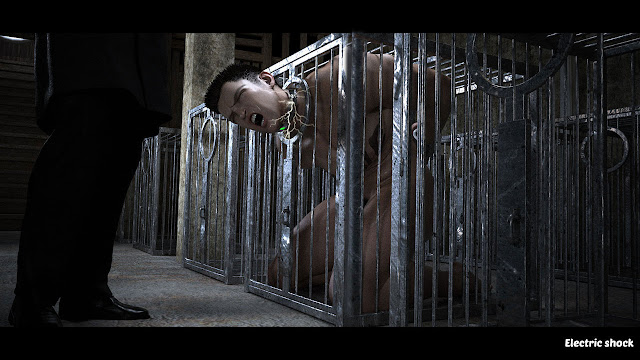 Eventually, Frank is told he is to become a slave. He is caged as punishment for resistance
and his new master fits him with a electrified collar to ensure his total compliance.
(It's a similar plot device to my current 'Flat Cap Gang' story line at the mitchmen Group)

I'm doubtful about cages in fetish imagery because they tend to obscure the view of the captive,
BrosFate's neck opening goes some way to sidestepping that. 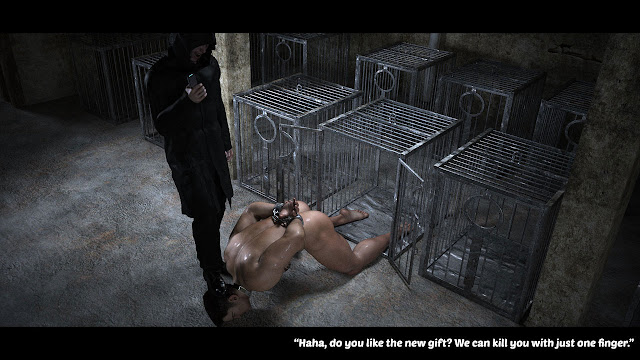 You get a good sense here of a defeated Frank stumbling submissively from his cage
to acknowledge his subjugation to the master. Our viewpoint withdraws as though it's an ending. 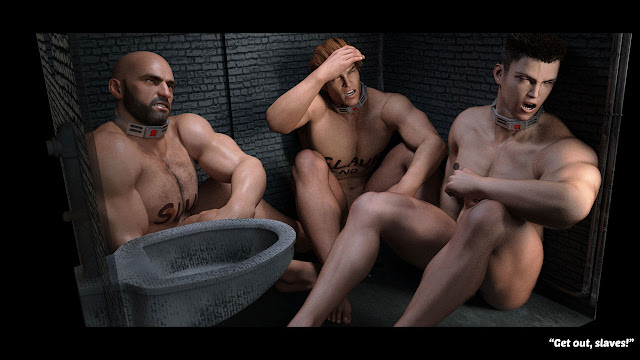 This image of the slaves to be, being rudely summoned from their darkened cell
stands out simply as a complex figure study, it does not rely on comic book action
or a particular context for it's impact.

The startling effect of sudden bright light is beautifully captured
and the resentful reaction of the hunky prisoner at the left is a great detail.

The low-level close-up captures the prisoner's cramped conditions well
while the prominent, dirty, toilet bowl spells out degradation and humiliation.
'The Captive Soldier' is a remarkable piece, which creates an exciting fetish flavoured drama with a believable storyline and without any of the artifice and short cuts to sex you get in ordinary erotic fetish. It's sexual content is varied and satisfying but not allowed to overwhelm the storyline which has an underlying energy that is refreshing to jaded palates. The artist's ability to create a consistent succession of memorable, sexy images throughout a story of 70 frames is laudable and shows a remarkable artistic focus.

Judge for yourself:- Captive Soldier #1 is posted in full at Telemachus12

Links:-  BrosFate @Tumbler , BrosFate @pixiv, BrosFate @Patreon
The pixiv gallery has one or two extra pictures
Posted by Mitchell at 18:02