In my review of Royale Studio's Soldier-Sailor set, picture 11, I remarked how Tom of Finland used the 'man and his kneeling dresser' theme in pictures produced about the same time. The picture I was thinking of is shown below, it was produced in 1959. 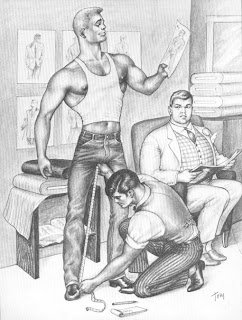 Tom of Finland - At The Tailor's


Inside leg measurement is a classic subject for corny innuendo, Tom's young tailor has a good fistful at the top end of the tape but the young man seems completely oblivious of it. Like Royale, Tom plays down the erotic intent. But this picture is relevant to Royale in another way, as it also contains disguised sexual content like Royale's pictures did. If you don't know the piece already, look at the image on the back cover of the fat man's magazine and you will discover exactly what he thinks of the young man being fitted out. I can't recall any other picture by Tom that has a hidden explicit message like this - but perhaps I've just not spotted them yet. 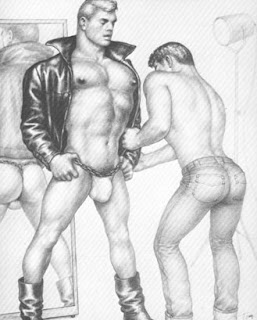 The second 'dresser' picture is from 1963 and, together with the previous picture from 1959, brackets the Royale era quite neatly. This time it's a modelling theme and exploits the idea of a hunk being 'adjusted' by a lesser mortal. Tom uses the clothing in a much more adventurous way. The G-string is extremely revealing and it's unconventional strap made from chain, plunges down between the model's buttocks creating a sexy rear view which even today gives a bit of a jolt. Note how Tom uses the mirror in exactly the same way as Royale did to provide this second viewpoint. The dresser's adjustments are less intimate this time, but as he bends in his ever-so-tight jeans, his backside seems to have caught the hunky model's eye. 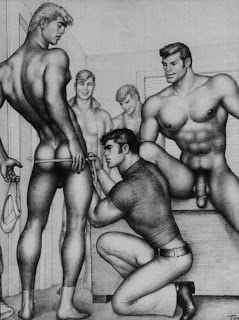 Tom of Finland - Measuring Up

Picture 3 is less well known, a locker room scene whose date I can't discover, but the frontal nudity fixes it later. The fashion looks circa 1970. This picture captures the 'kneeling dresser' pose in classic form and the drawing of this particular young man is rather nice. Tom used submissive kneeling quite a lot around this time in a variety of situations. In the best ones, like 'the careless motorcyclist', the victim is being forced down.
This image is a curious mixture of the explicit and the coy. The spectator's cock is rather substantial but points downwards - at one point in the crazy world of censorship this was a genuine yardstick of acceptability. It doesn't really add a lot to the picture but did represent a statement of liberation to it's audience at the time.
The proximity of the dresser's face to the jocks equipment is another fairly obvious erotic feature, but what exactly is the dresser measuring? Inches count in this area! What is he doing with his hidden left hand? Probably up to no good judging by the various facial expressions.
The tape measure is quite a useful accessory here, visually highlighting the jocks backside and providing a sense of his being temporarily captured while his 'vital statistics' are assessed.

I have a recollection that there is another picture by Tom on this theme but I haven't been able to find it. It shows a kneeling shop assistant assisting a young man into a very revealing new outfit but in this picture the assistant is very obviously embarrassed. If anyone can help with this, please get in touch with me via the comments feature or the e-mail link on my profile.
Posted by Mitchell at 09:24

Have the fourth tailor-measurement ToF to hand:its a military/marching band. How do I send it?

Thanks for the offer! I have now made my address visible in my profile. I must have been getting a lot of spam!