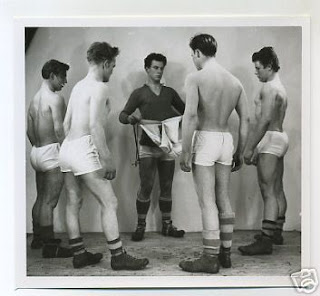 This set continues the football theme, but it's essentially a group of men wearing nothing but tight white shorts - and socks of various patterns which I find are invaluable in tracking the different characters through the 'action'. As far as I can see it's a different group to the last set although they are obviously sharing socks (and possibly shorts too, a nice thought!).
The first picture is a recent acquisition and I'm still trying to work it out. The team seem to be watching the central figure tear up a shirt. Is he the coach with a whistle dangling from his right hand? Are they being expelled from the team? This chap's shirt is a real period piece but it's the shorts that are most eye catching.
Erotically speaking this is an unremarkable picture but what is striking is the number of actors/models in it - 5. When did you last see 5 men in a modern photo? The only examples I can call to mind are from Bound Gods, maybe a few other major film studios and fashion shoots like underwear range launches. 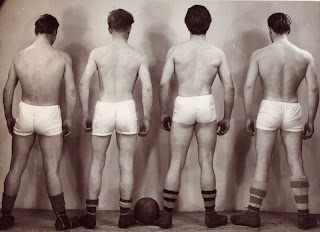 Royale - Bottoms in Football Shorts
This is a straightforward cheesecake shot 50's style but with my interest in shorts and men's bottoms it's irresistible. In Royale's pictures the themes of discipline and submission are never far away so that even a simple line-up like this has darker possibilities. These men have well shaped bodies and natural muscle definition, with a haircut and new footwear they would grace any modern photographers output. 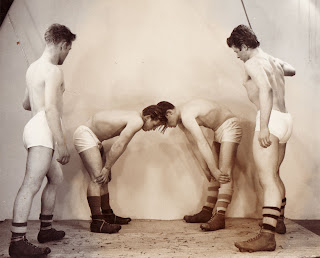 Royale - Double Caning for The Football Team
The series continues with a series of shots in which the models take turns in caning each other (for their joint failures according to my interpretation). This picture sums it up pretty well. There's quite a contrast between these wooden, static pictures and the energy and atmosphere of the last set suggesting they are earlier, or perhaps the models were less experienced.
Posted by Mitchell at 17:42