The Fetish Art of Beau

Beau shot to prominence in the 90's on  the strength of his eminently publishable pictures which featured rich colours and beautiful men and avoided sexual explicitness. I passed over him when I compiled the letter B of my A-Z of fetish artists, but reviewing his work now, that may have been mistaken. The understated invocation of fetish ingredients in some of his pictures makes a worthy contribution to our collection and the lush treatment (I can't really say romantic!) is a welcome break from starker contributions to the genre.

This is one of the best. This man sprawled on a dishevelled bed and sporting a cropped military-style haircut and cute bubble butt make an extremely attractive image, even without the rope bindings holding him down in this inviting position and the open scissors discarded between his legs with one blade pointing ominously in the general direction of interest. It looks as if his underpants have just been cut open to reveal this sight, though some might prefer to imagine that he's just had an impromptu unsought haircut. Squaddiefication you might call it (Jarheadification hasn't quite got the same ring). Either way that look tells us he knows there more to come. 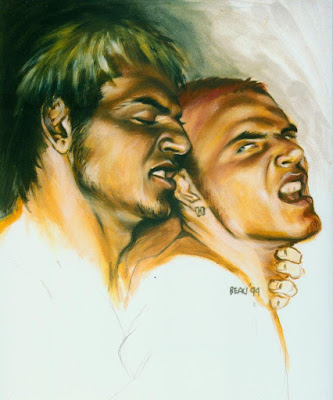 There's a great sense of drama in this study of two men in the throes of passion. We don't need to see explicit detail to know what is going on, the faces say it all and it looks as if there's an element of forcefulness in play adding the spice of fetish domination to their intimacy. 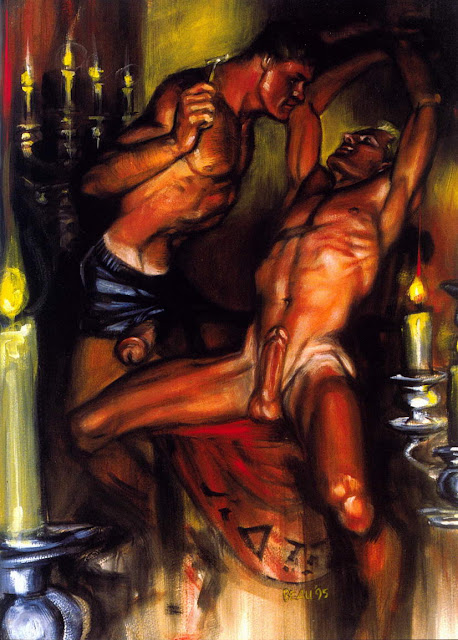 This image is less serious in intent, the recipient of the razor's attentions is not restrained other than by his partner's hand but still he cannot contain his excitement at losing all of his body hair. Shaving features fairly regularly in my posts (see label below for more) but in this one, unusually, it looks like we've already missed the main action - unless his blond head hair is also up for it. For me those blue shorts make a great embellishment for the top, suggesting his other sporty interests.
There's also a curious mix of 'mood' items in the surroundings, with suggestions of ancient Greece jostling with Transylvanian candelabras. I love the phallic candle holder in the left foreground, a case of hidden eroticism where it isn't really needed! 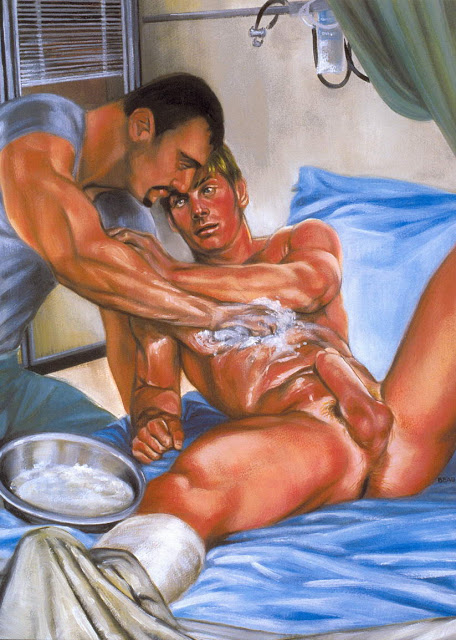 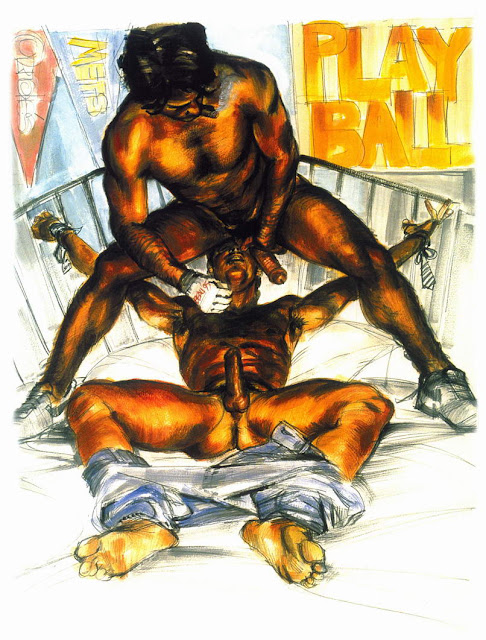 There's a story behind this image which I haven't discovered yet. The collegiate pennants and sporting slogans place us in the realms of institutional initiation, but the cigar-smoking top with gloved hand and trainers is surely a coach, doing what coaches used to do but ain't supposed to any more (and I'm not talking about smoking on the job!). Tying up the initiate is usually reserved for the student level of pranks but it helps build a slightly sinister flavour in this context, which does not go amiss when it comes to giving youth a first, exciting lesson in anal intimacy. 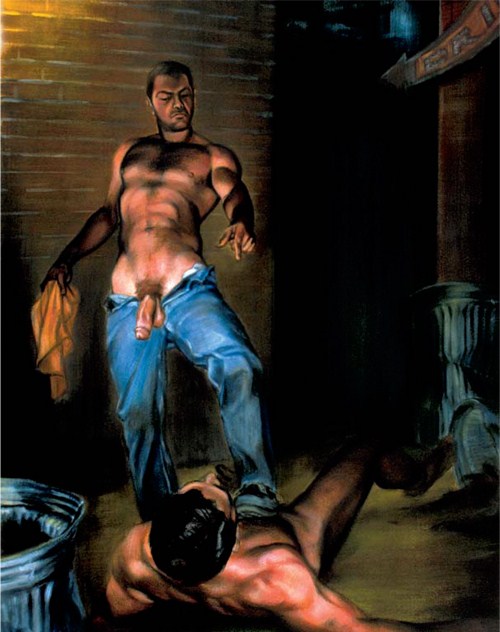 There's no ambiguity about the dominance or aggression in this back alley encounter gone bad. As in the medical image above, Beau uses clothing to help assert the power hierarchy. His depiction of the classic, foot-on-body, intimidation tactic works better than most I have seen. Reading the body language, however, it looks like the chap on the ground is going to get away with a severe telling off despite his presently, severely endangered nether regions. 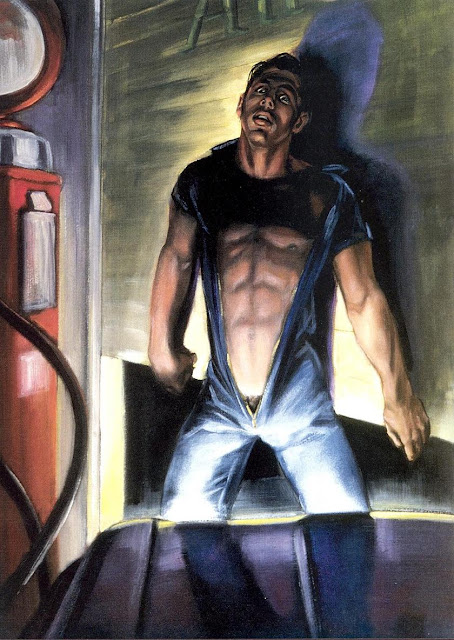 The scarcely any less menace in this scene either and the alarm of the surprised garage hand is beautifully captured. Beau has got the allure of unzipped overalls (worn without underclothes natch) down to a tee here and placing us in the driver's seat allows us to salivate over that prospect in the knowledge that the object of our lust is already at a disadvantage, with back to the wall.
One for bedtime musings. 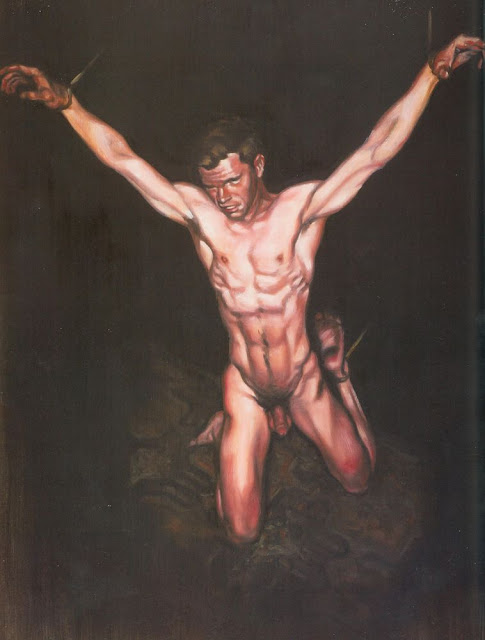 Strangely enough, when Beau strikes out into classic dungeonalia the result is less immediately stirring to the juices, although he does invoke a nice sense of isolation and anxiety in his prisoner who is also refreshingly normal. The ropes holding the prisoner's hands are more like tethers than demanding restraints but Beau redeems this weakness with his right leg lift which is not only awkward and embarrassing for the prisoner, it's also putting a lot of painful stress on his other knee which does not need any restraint in this situation of course.

Actually it's not a dungeon, that's a carpet he's kneeling on, a concession to comfort that makes such a devious torture much more practical over an extended time scale. It also tells us that this scene is being played out in the living quarters of some well-heeled but very unpleasant gentleman. The devil. as they say. is in the detail so never neglect to check it out! 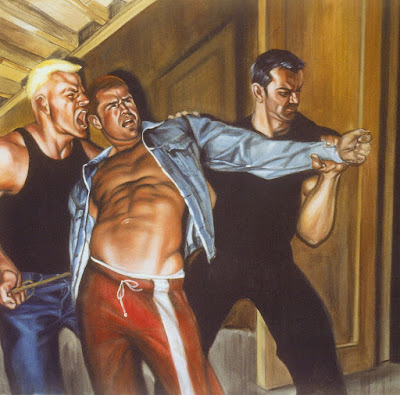 Kidnap scenarios are tricky subjects in erotica but Beau dodges round that objection by exposing minimal flesh in the process. It looks a bit stagey, particularly the operatic, outstretched arm which surely ought to be behind his back, you can already see a ghostly impression of his elbow sticking out down there. The 'athlete's' mature appearance and combination of clothes is also distinctly odd. But if you focus on the two kidnappers, you can see that a much more memorable image somehow got away here


My final image is unashamed beefcake and not really fetish unless you give significant weight to uniforms, but it's probably my favourite out of all Beau's pictures. The pugnacious-looking, but lusciously muscled protagonist seems a natural for the military garb and bears a striking family resemblance to another favourite of mine, Etienne's much-abused blond from Night Patrol and other awkward situations. In the jungle camp setting his glistening body, spotlit in warm colours, brilliantly invokes the 'Fever' of the picture's title.
Man Fever, Peggy and I would say!.


Beau is no longer with us and his work is harder to find than it used to be.
Two glossy books of Beau's work have been published by Bruno Gmunder (inc. Men of Beau No 2)
There's a selection with links at gay art collection and more at Daddyshere with interesting bio