The Art of Paul Richmond (PaulyPants)

Richmond's 'PaulyPants' creations are entertaining and not entirely without interest to fetish minds.
Most of us have wanted to do something like this at some time to frivolously signal an interest in a man who looks difficult to approach. However, if you mentally magic away his pulled down pants, the pose that is left suggests a much more earthy sexual interaction in prospect. This image is on a par with the 'hidden eroticism' of days gone by (click on label below for more).

The dog walker in the background, stumbling on this scene, adds the spice of public exposure, but his dog also brings to mind the butt-sniffing proclivities of that species and suggests the possibility of a more complex, dependent and possibly dark relationship developing (or already developed!) between the two men in the foreground. It would be a relationship not entirely consistent with the 'Freedom flag' design of the rainbow pants - although I suppose there are those that may say that Freedom to sniff a complete strangers ass on a beach is what it's all about.


The artist acknowledges his inspiration from 1950's glamour art in this picture, 'Stop, Shop and Drop'. His caption is a lot wittier, but it's interesting to see that, unlike the original, his modern 'liberated male' version does not entail the entire loss of panties. There's not even a glimpse of cheek. I acknowledge that there will be those that will find this level of suggestiveness more sexy than the 'full monty' but the comparison highlights just how sexy it was possible to be in pre-liberation days - providing you were heterosexual of course. The triangle formed by the girl's rigid legs and panties is subtly suggestive in itself, and the wind blowing the skirt between her legs does more than just expose her thighs and highlight her ass. These elements are absent from Richmond's version but you do get a more impressive bunch of celery stalks!


This example shows the artist is not averse to offering saucy details and the positioning and clenching of the tailor's hand needs no explanation either. I say tailor, but his poor fitting trousers and muscular arms might be clues to an impostor taking the opportunity to get up close and personal. Which might explain why the customer (unusually) is having to stand on a chair, bringing his crotch up to a convenient level for checking sizes. You get the feeling he's a bit naive and the pristine trainers (which are a nice detail) somehow contribute to this.

PaulyPants is not the first artist to pick up on Santa's question 'have you been a good boy this year?' but he's neatly linked it to another less innocent expression with the title of this piece. Presumably the opened gift box originally contained the smiley pants now providing a target area for Santa's verdict. The recipient of the spanking does not look overly youthful but these pants are not the stuff that adults usually wear. His 'gift' almost seems to be part of a well defined punishment ritual signalling temporary demotion to boyhood, the spanking equivalent of the Black Spot in Treasure Island. 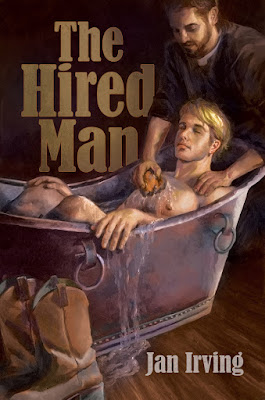 In the light of the revelations of recent years you might see uncomfortable suggestions of innocence exploited in this image which the artist did for a book cover. Bathing another man is a deeply personal service and deeply tempting too if he's built like this. The cowboy boots in the foreground give him added stature (what size are they you wonder?)

I'm drawn to the crucifixion imagery here but there's a more overtly religious theme with the angelic boys seeming providing a more obvious representation of temptation and martyrdom for the tempted. I'm not sure about that but this may be a book cover too, reflecting the story within. However Richmond often uses religious symbols in his work, sometimes mockingly, so it's not obvious what his slant is. You'll see what I mean in the next image. 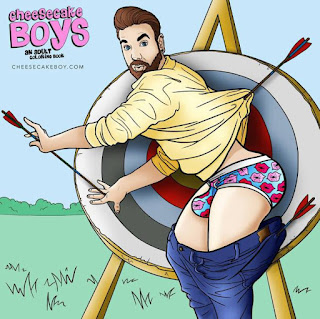 This comes from another strand of Richmond's work reflecting the current fad for adult colouring books and if you visit his site you will find dozens of contributions of his outline pictures, coloured by his fans. This example caught my eye initially because of the nod to the story of St Sebastian. If you imagine away the man's right leg, a tempting, if excruciating, target presents itself and I'm not sure the original sketch wasn't drawn that way if you look at how the jeans seem to be distorted. Beyond such degenerate thoughts however, the lip motif's on those underpants are sheer genius in their intrinsic eroticism and strategic placement! 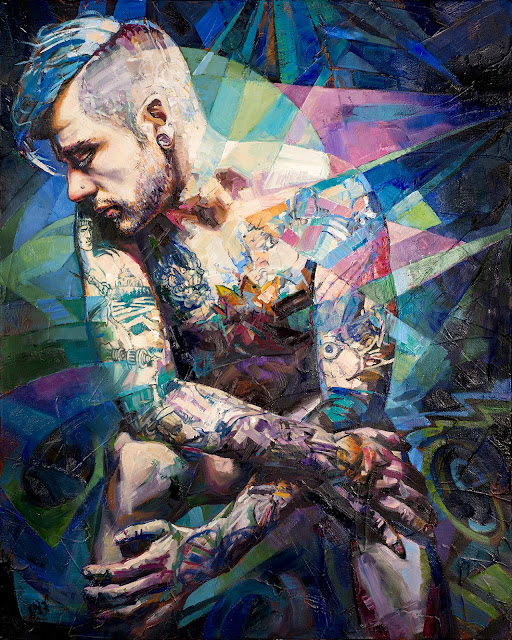 This is an example of Paul Richmond's more serious work. His use of colour and texture is bold, highlighting the masculinity of his models with overlays of thick brightly coloured paint that are sometimes both disturbing and intriguing, particularly when applied to the face (which my example does not show). It's not unlike the extremes of stage/performance make-up from which he seems to draw his inspiration. See more at the website (link below) 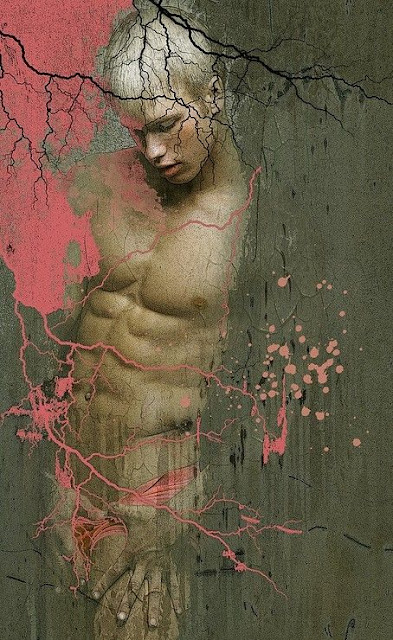 I found this piece on one of Paul Richmond's sites. I'm not sure if it's by him as the style is quite unlike his other work but it's worth presenting anyway on it's own merits as a picture. There's a fairly artsy overlay of Japanese influences in the colouring, the twisted branches and the cherry blossom-like pink blotches. The result is both sensual and pleasing.

I'll finish with one of his more memorable 'PaulyPants' creations, Christmas seems to inspire him and this present seems to have dropped from heaven (if you'll forgive yet another religious reference!). He comes gift-wrapped in clingy, reindeer motif underpants, a device that bestows youth and innocence as noted above. The partially ripped jeans seem to suggest he's ready for more adult things and you'll see that the artist has tailored the tear into the erotically suggestive, triangular shape, whose absence I lamented in the 'shop and drop' image above.

Clearly the title does not mean what it appears to mean at first sight. If you're looking for more of PaulyPants unique brand of hidden eroticism, just imagine the bearded man turning his head to the front. Suddenly the strange positioning of the falling youth makes perfect sense - or have they simply been interrupted by a bump in the road?.

As in many of his pictures, there's a distinct (if not enormous) age difference depicted here and sometimes Richmond seems to be walking a tightrope above dangerous waters by dressing his men in the apparel of immaturity. The result, whether intentional or not, is to give an original twist to the fetish fundamentals of dominance and power.

See lots more at Paul Richmond's website and his Deviant art page
Posted by Mitchell at 11:08

The 'Beach Bum' drawing is an homage to the iconic Coppertone sunscreen ads from 1959 onward featuring a little blond girl with pigtails being surprised by a small dog playfully tugging on her swimsuit, revealing an untanned bottom. Ironically for this new version, I believe the original dog was a Boykin Spaniel.

Thanks for that information, I didn't know that!