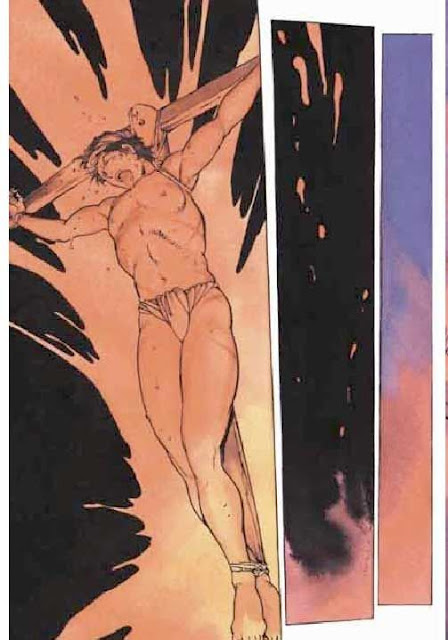 This artist is known to me only for one work and it's a work relating to a niche interest that I would normally shy away from mentioning in this blog, namely religion and specifically the subject of 'The Crucifixion'. Imagery of this event forms the focus of that religion (despite the injunction of it's own prophets not to worship graven images) but it's quite commonly and casually referred to in the wider world as 'homo-erotic'. This is said with subversive intent of course, but the implication that images of torture and painful execution are a staple ingredient of gay erotica and of universal appeal is surprising to say the least! However....... 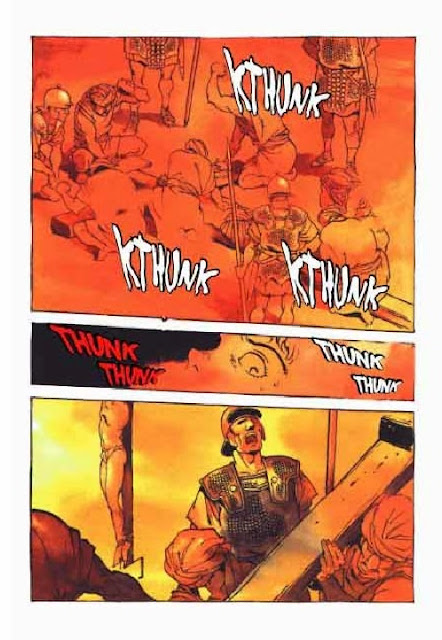 Regardless of this I know Crucifixion imagery is of interest to readers with S&M leanings. Yoshikazu's work tells the religious story in a frank, direct way that is quite interesting but his exploration of the mechanics of the process, starting with the nailing (above) certainly delves into the fundamentals of what makes this a sado-masochistic subject. Perhaps unsurprising given his Japanese ancestry.

Thus, straight away in this image we see the victim in the hands of soldiers intent on subjecting him to an extreme (life-ending) process. He is stripped of his clothes, all the trappings of life, all that shields him and separates him from other men. He is violated, being attached to the cross by a gang of men in a way that is crude, painful and virtually irreversible, removing all possibility of escape.  Finally he he is raised up for everyone to see and view his demise. Danger, helplessness, vulnerability, fear, violation, pain, humiliation. All these ingredients are laid out in these few frames and they are the essence of any S&M scene. Why such things should be erotic to those of us in this brotherhood is something of a mystery*, but the sketchy thumbnail in the bottom left corner is enough to confirm it's potency in this respect.

*My personal view, for what it's worth, is that if such things as those listed above, such bad feelings, are a prominent part of our lives, then sexualising them, associating them with pleasure, in effect defuses them and ultimately through the mechanism of orgasm, it discharges them, temporarily at least. 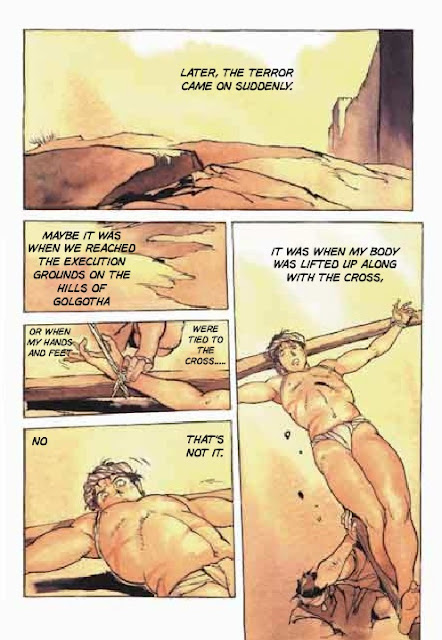 In these frames the artist depicts the application of this terrible process to his narrator, a young man who has killed a roman soldier. In religious terms his guilt is meant to legitimise his treatment and to highlight the injustice to his 'innocent' companion on the adjacent cross. Likewise the use of ropes to secure him contrasts with the brutality of nails used elsewhere.

As is customary, Yoshikazu's detailed exploration of the crucifixion process skirts round the engineering challenges of erecting a giant cross with victim attached into a stable position using only primitive technology. I don't imagine Roman soldiers signed up for getting a hernia by doing this job! One of the mysteries of construction history to set alongside Stonehenge and the Pyramids (and the provision of gallows in Western Townships!). 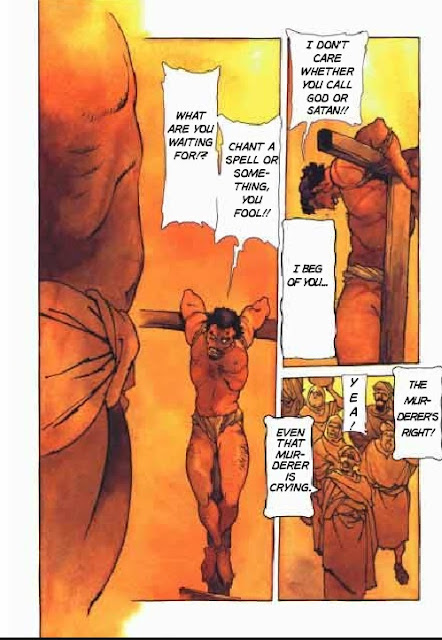 Fortunately, the other two participants in this grisly tale are indisputably adult men. The concept of simultaneously torturing 3 men from different backgrounds is a device that amplifies the helplessness factor in S&M scenes, for those of masochistic tendencies. It invites them to visualise fellow-sufferers in a strange buddying arrangement that actually goes to the essence of our humanity as social animals.

For sadistic minds it conveys a sense of greater power and a mechanism (illustrated here) for charting the degradation and breaking of the victims. This thieves mode of execution is probably the most extreme of the 3 men and that is vividly conveyed to the viewer, as is his masculinity despite his desperate plight. The bickering that erupts at this point is not without justification to objective observers. 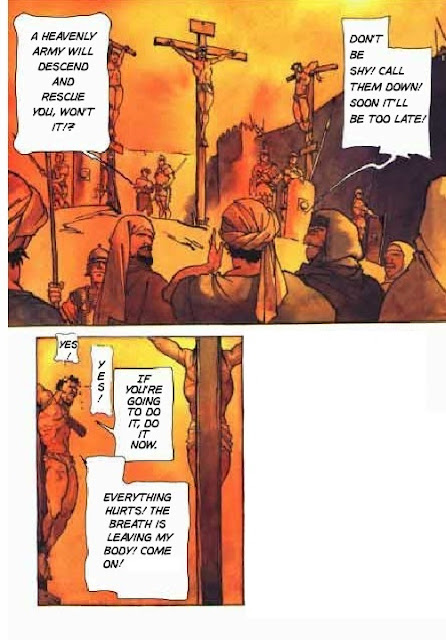 The message of the upper picture suffers from the familiarity of the scene. The rather clumsy dialogue suggesting humiliation is subtly undermined by a composition that seeks to sanctify. In contrast, the more intimate lower image is a much more telling (and interesting) account of a man facing death. The artist draws out more details of the victim's suffering and bravery. (In contrast his companion seems cold and indifferent). If I were to describe this as a breath control scene you might see it in a completely different light. 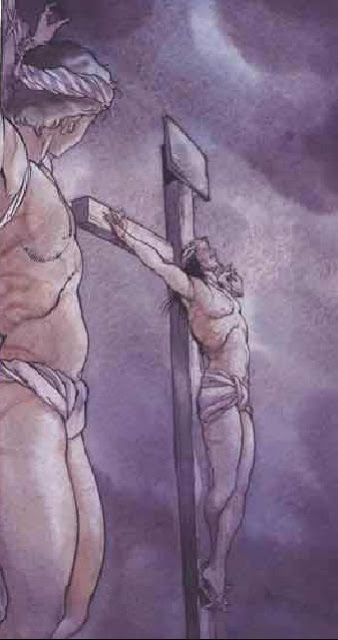 The hot daytime orange of the scenes above is replaced by dramatic blues as menacing storm clouds make a typically mystical intervention. This image is pure propaganda but you have to admire the technique as the young narrator looks up to his (now) regal companion, offering himself up to the coming storm. The lads attitude is a stark contrast to the resentment of No 3, but I know who I prefer!

It's not part of the usual story but Yoshikazu even depicts the pathetic expiry of the young narrator and he does it in terms that can only be described as voluptuous. In seeking to express the desperate efforts of the crucified man to draw his final breaths he shows us muscles that are deeply folded by his exertions, all well and good. But these muscles are so well rounded they are positively alluring and give no sense of the physical deterioration and dehydration which will have brought him to this point. A heroic death, but not a realistic one.

You can easily find out about Yoshikazu's manga work on-line but I don't think there's much else of a gay flavour to find, tell me if I'm wrong!

There are already many other examples of crucifixion posted in this blog, which you can view by clicking the label at the foot of this post. Most of these depict it as an abstract , intimidating punishment or trial of strength and do not feature the iconography that specifically connects it to the Christian Religion.


For more articles in this series click on the A-Z label below or search for specific artists using the index page or search boxes (top and top right)
Posted by Mitchell at 11:38