Tom of Finland and Fascism - a Historical Context

The controversial SS whipping of a captive, referenced in Part 5 of my Tom of Finland A-Z article (and reproduced in Hooven's biography of him*) can be seen in a different light if the historical position of Finland during the Second World War is understood.

Finland did not exist as an independent nation until 1917, just a few years before Tom was born. It had been a Russian possession for over 100 years and before that part of Sweden. The Finns seized their independence during the chaos of the Bolshevik revolution and despite gaining international recognition had difficult relations with Russia over borders in the years that followed. In the tensions and machinations preceding WW2, Russia demanded land and military bases inside Finland and eventually invaded in 1939, when Tom would have been 18. He was called up for military service the following year. It was a bitterly fought war and Finland, fighting alone, inflicted significant defeats on the Russians before being forced to yield to superior strength. It's not hard to imagine how much hatred young Finns like Tom must have felt for the Russians, but Hooven recounts how Tom actually killed a Russian paratrooper during his war service and was mortified to discover he was a beautiful young man, not a demon. This incident at a very impressionable age deeply affected him.

The German government had cultivated Finland as an ally during the inter-war years, Tom visited Germany twice on pre-war school trips as a teenager and no doubt saw them as a friendly people based on his personal experiences. The Nazi's were also widely admired in the 30's for the order they brought to Germany. Their hatred of homosexuals was no great secret but Tom was still young then and if he was aware of such things at all, he'd know attitudes were not much different in his homeland. As it happens, homosexuals put into concentration camps by the Nazi's were compelled to complete their sentences after the war and their oppression was not acknowledged at all until the 70's.

The Finnish people never supported Fascism and Jews were not persecuted by them. Perhaps because of this there was no help from Germany during their 'Winter War' but when alliances shifted in 1941, Finland allowed Germany to attack Russia across their territory and took the opportunity to join in and recover land that had been lost the previous year.

Ultimately that effort failed too but the sense of Russians as bitter enemies and Germans as friends was reinforced. During this period German soldiers mingled freely with the Finns. Tom seems to have done his share of fraternising, which could have included members of the SS who were specifically assigned to carry out intelligence and political liaison functions in occupied/allied territories - not just the brutal role in 'The Final Solution' for which they became infamous. 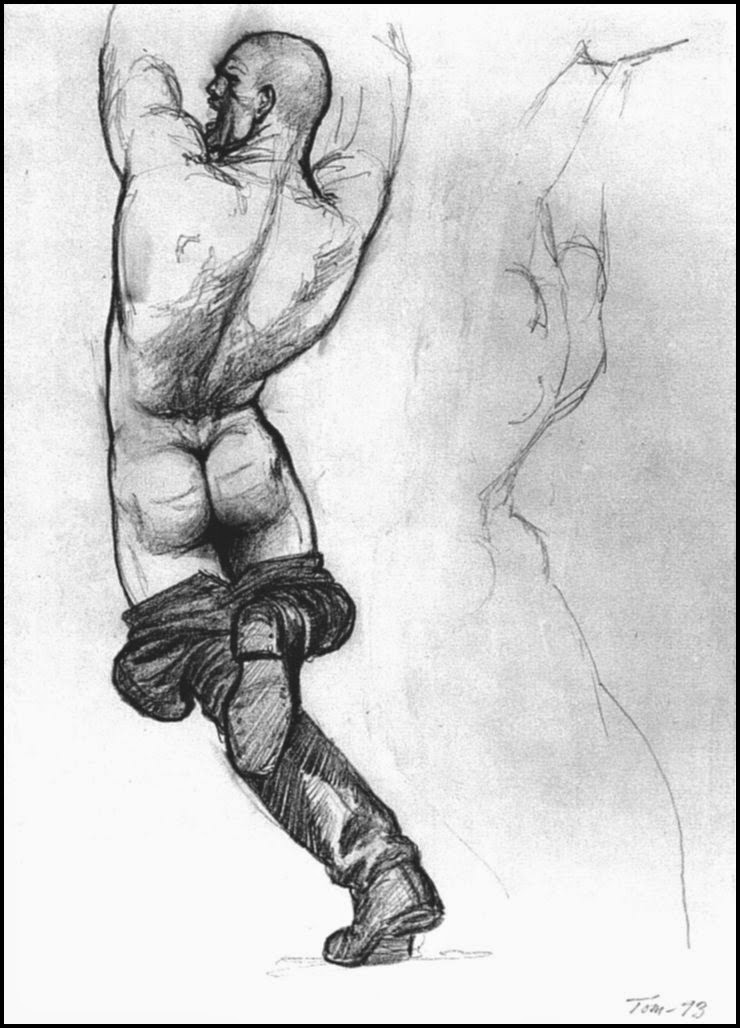 Given this intermingling, Tom's 1973 idealisation of a German soldier in uniform is not very hard to understand, and his choice of SS uniform is probably less about Nazi-dom than it seems to us in retrospect. His rather brutish characterisation of the prisoner, however, especially in the preliminary sketch (above), raises the intriguing possibility that he is working through his antipathy to the Russian/Militaristic aggression which had obliged him to kill another man in his youth and in which the German soldiers assisted his homeland.

Why depict this in 1973?  Perhaps because in this year the Vietnam war was entering the end-game of defeat for the western allies and Russia was threatening to intervene in theYom Kippur war to rescue it's allies (Syria and Egypt) after their failed attempt to restore historical borders with Israel. A time of violent redrawing of boundaries, great tensions for the world and unnatural alliances, a familiar, disturbing tale for Tom - and not dissimilar to the situation we are living in today with Iraq v ISIS v Syria and Ukraine/Russia

I don't have a copy of the finished SS picture and haven't been able to find it on-line but it is reproduced in Hooven's book:

Tom also said something about the Nazis being the handsomest men in the sexiest uniforms, and that he HAD to draw them. (But, yes, lots of people then, early in the war, saw the Nazis as possibly their only defense against the Commies). -J.T.