The Sinister Tom of Finland 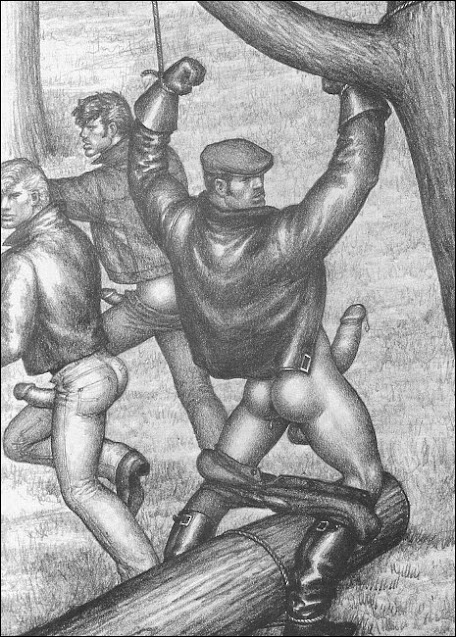 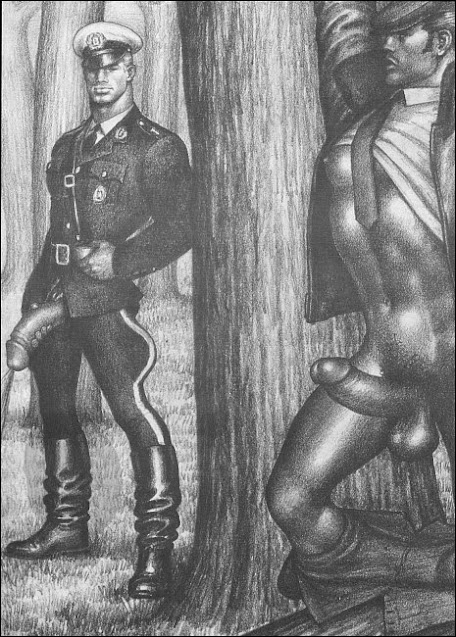 Forbes notion which I mentioned at the end of the Part 3 that “...there is nothing mean spirited or sinister about a Tom fantasy.” probably does apply to 'The Rope', but in general Kake depicts a world full of mean-spirited people, like the opportunist thief (Kake 2), the Police Officers who arbitrarily whip 'streakers' (Kake 3), a spurned woman who takes her revenge by reporting her former lover's homosexual activity to the police (Kake 6), a landowner who threatens a trespasser with a whip (Kake 21) and attacks him for making an indecent suggestion, a 'hero' who metes out a spanking and sexual assault for the offence of bending a photograph (Kake 23)

There's no shortage of the sinister either, we have a hijacker (Kake 8), several men who force frightened victims into sex at the point of a gun (Kake8, Kake15, Kake 23), an Army Officer who arrests and tortures a civilian for making approaches to his men (Kake 14) and several policemen who abuse their authority to satisfy their sexual urges (Kake 3,22) - and that's not even counting Kake's own, less than consensual, approach to sex with strangers, including 2 straight men (Kakes1, 26) and his use of sex as a punishment, or if you prefer, as a reprisal (Kakes 5, 23) 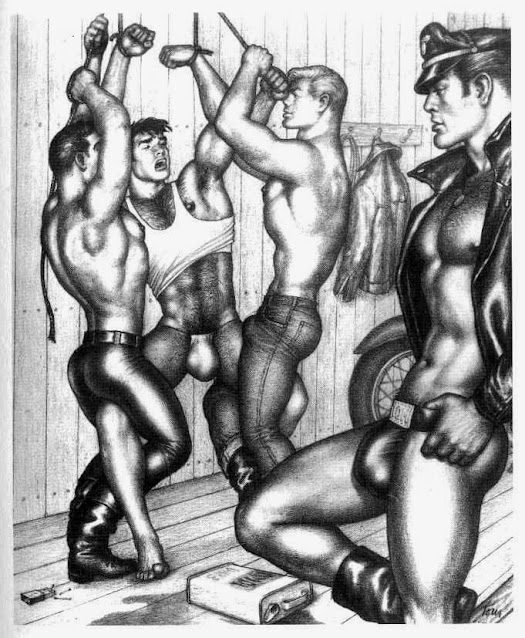 The sinister in Tom is not confined to the Kake series. This image from 1963 was published in the first Tom of Finland Retrospective with the bottom section containing the petrol can and matches cropped off. It may be that the dishy captive has simply been caught attempting to set fire to the biker's shed but I'm obviously not the only person who sees a more sinister narrative where the bikers are threatening a terrifying initiation/revenge of the sort later depicted so graphically by Sean.

The characterisation of the captive in this drawing is interesting. His white, sleeveless singlet is a rare garment in Tom's drawings. In that era it suggests conventional underwear and clean living to me, but is also associated with shirts-off manual labour, or it may be intended to signify a crude or slobbish, but very male personality. His hairy body, equally unusual for Tom, poses a similar dilemma. Is it the natural look of an uncorrupted, 'real' man or the unkemptness of a beast? Recall there are two villains in Kake who are depicted with hairy bodies, but they are not nearly as handsome as this chap. Your interpretation makes a big difference to the way you view this image.

Even more intriguing is his posing pouch. This is the uniform of the beefcake model of the time but would never normally be seen on a hairy body (too sexual) or outside of a studio for that matter. So is this a lad who secretly wears one and fantasises about being a model - or have the bikers dressed him that way to live out their own fantasies?
(Comments from readers welcome) 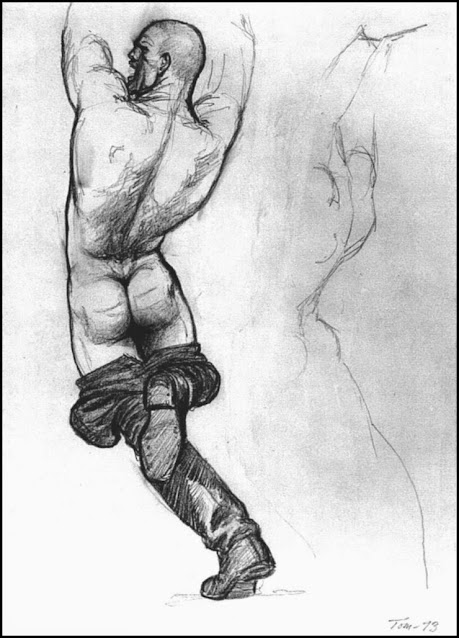 There are plenty of whipping scenes in Tom's work which most people detached from the world of S&M would consider sinister in it's own right. However, this victim from a 1973 sketch is unusually animated, indicating a very painful experience. In the final picture (which I don't wish to post here) Tom paired him with a torturer who is a German soldier kitted out in the full regalia of the wartime SS. This is Sinister with a capital 'S'. In the years following WWII the SS became synonymous with cruelty, torture and extermination and by this time the extent of their excesses was universally understood.

I'm prepared to allow Tom the benefit of the doubt about Fascism since I've never seen any evidence of it either in his work or the accounts of his life, but he does seem to have been fascinated with authoritarianism in uniform and I am certain that he knew exactly what he was doing in creating this image. It would shock most people (just as an IS atrocity does today), but as we've seen Tom didn't mind being provocative and often paid scant regard to notions of propriety or political correctness. However, in it's time this imagery conveyed forcefully the desperate plight of the prisoner – which was Tom's main purpose. This is a picture about pain and danger. There are plenty of artists around today who use Middle Eastern imagery to similar effect.

see also my historical note on this subject 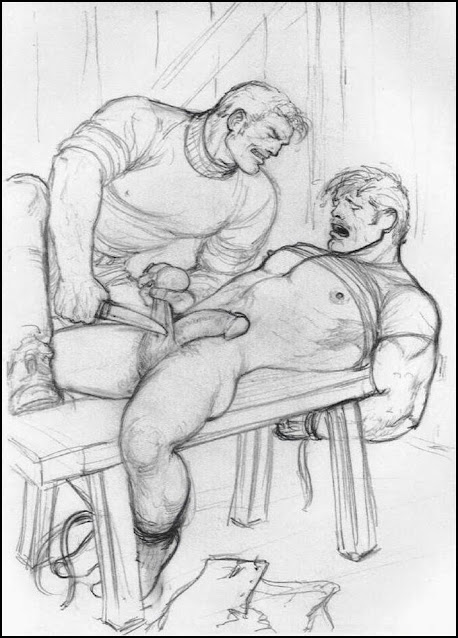 This image from 1978 is also capable of no other interpretation than sinister. Significantly, in the final, published version, the droplets of sweat signifying the terror of the victim are absent and the cruel set of the captor's mouth loses some of it's venom. You can see a lot of serious emotion went into creating this sketch but it's actually not about mutilation, it's not primarily about sex either – the knifeman is fully dressed. It's actually a depiction of fear and what it feels like to be deeply threatened. It's a theme that recurs over and over again in Tom's work, but usually less graphically than these last two works. Check out the other pictures in this article as examples. This is also why I highlighted the subtle but equally sinister, mock-lynching sub-narrative in 'Kake in the Wild West'.

Notice how Tom has drawn this picture in such a way that he can easily substitute a cock for the knife if publishing preferences require it. It's a good example of his pragmatic flexibility and also his thoughtful approach to composition, honed to perfection by years of having to disguise eager cocks in more prosaic situations. Coupled with the censorship story of the biker picture (above), it also makes you wonder what other pictures may have been sanitised for public consumption
- and how. 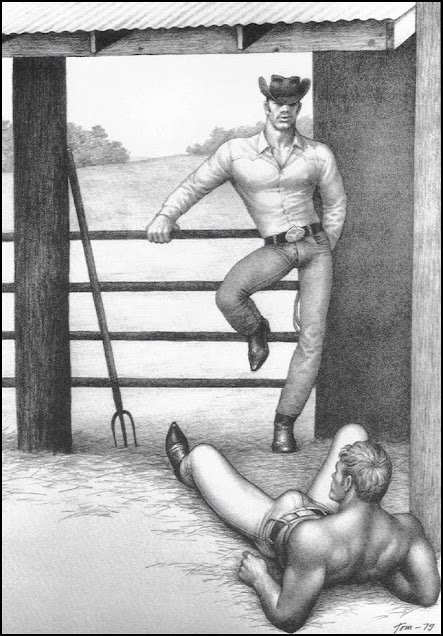 At first sight this is an odd, unexciting picture, a simple ranch scene showcasing some nice, erotic figure drawing, but the characters seem uninvolved and disconnected, which is unusual for Tom. The half hidden rope adds a little frisson of bondage potential, but the three pronged pitch fork to one side seems like a gratuitous bit of added 'colour'. However, if you observe the angling of the fork when transferred to the cowboy's outstretched hand, the picture assumes truly sinister dimensions putting the mound between the reclining man's legs in no less peril than the cabin captive's tackle in the picture above (which was drawn just one year earlier).
This one is all in the mind.

Notice again how the incriminating implement can easily be cropped out to avoid giving offence, the blank space bottom left is equally intriguing! 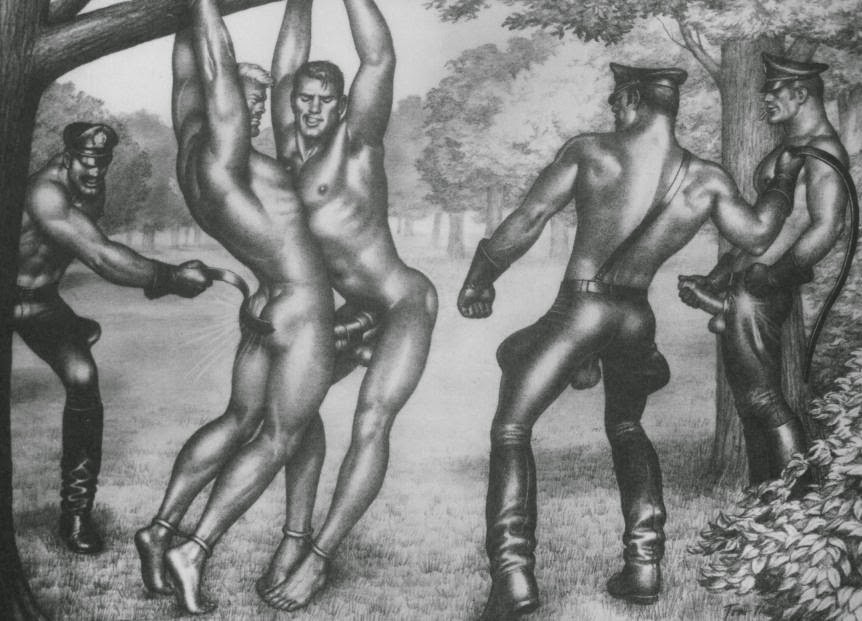 This is slightly different but one of my favourite Tom images, showing two men with their cocks strapped together and being belted by a gang of leathermen. Tom depicted a number of woodland beatings like this but usually the victim is solo and it's clear from his boots etc that he is part of the club and we are witnessing an initiation ritual or disciplinary event.

These two are totally naked and are not obviously bikers at all, one is strikingly handsome and long limbed and this uncertainty over their identity and relationship, if any, to the gang immediately introduces something of a sinister flavour. Their joint punishment with it's sexual element raises further questions – are they buddies, lovers, strangers? Novices, troublemakers, or innocent passers by at the wrong time? All in all it's a potent brew.

This is 1977, well after the Hell's Angels heyday, but Tom's biker gangs with their militaristic, leather uniforms and muscular torsos still look threatening and dangerous, particularly in the isolated woodland setting. There is always an element of doubt about them in terms of intent and limits. Tom underlines this by emphasising the severity of the beating with impact symbols in the manner of comic strips. One of the beauties of the picture is the stoic attempts of the victims to maintain manly composure under this fierce assault, which one imagines is going to continue until they both produce a suitable sexual response. There's a finely judged element of cruelty here.

Forbes 'defence' of Tom is untrue but understandable, Tom was still alive and looking over his shoulder when he wrote it. But that's not to imply that Tom was mean-spirited or sinister. His biographers reveal very little of Tom's real character, a modest man with a drink problem, but the Kake stories suggest a bluff, hearty man, totally unreconstructed, who's been through the mill and certainly hasn't forgotten those lessons (and simply 'moved on' as modern attitudes would have it),
but who has learned to laugh at life, through his work at least, while retaining a streak of gleeful maliciousness against those who wronged him.
These 'sinister' images give us a glimpse of the depth of those feelings.

For other artists in the A-Z series click on the label below or search by name.
Posted by Mitchell at 17:25