A-Z of Fetish Artists - Thompson (and a mystery)

These fragments are all I have by this artist so I can't comment on his other work but this is a very sexy and tantalising sample featuring bondage and clothes ripping in a fanciful medical scenario. The frames have been badly cropped but I haven't attempted to tidy them up. 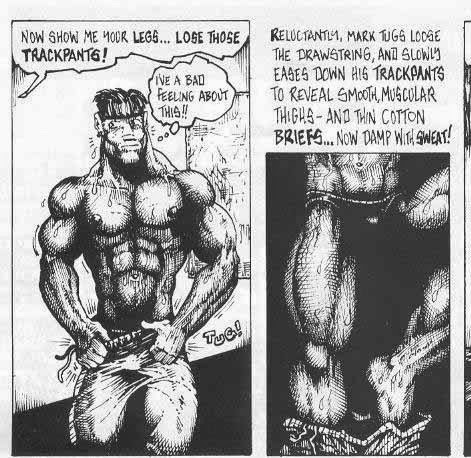 It's always nice to see a muscular jock obeying the voice of authority despite his own doubts. I expect pictures 1-3 have been left out because they are fairly tame but I like to see a story unfold and find it quite frustrating when presenters insist on cutting direct to the chase. At least we get to see him undress.

The physiotherapist turns out to be quite an old man and his close attentions embarrass the athlete, but not enough for him to challenge his authority. It's a delicious power play scenario that gives hope to all those with less than god-like attractions. The interlinked arms here make me wonder what happened in picture 5, is he cuffed behind? However, the text does give some clue to what we missed in Nos 1-3. I think the two frames would probably work better if separated, but it's an interesting device. 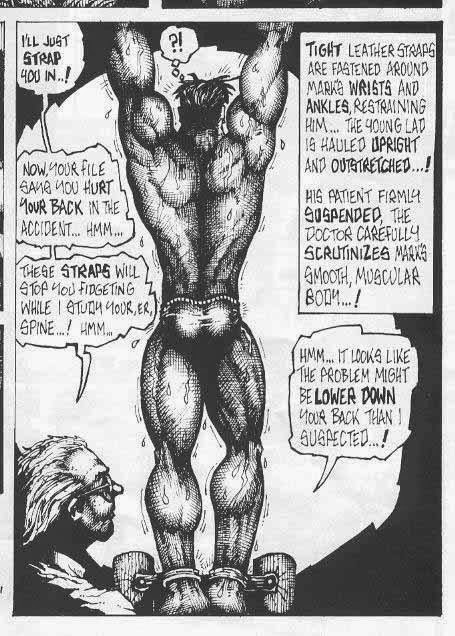 A bit of a leap of faith is required to believe this development, this jock really is compliant! I suppose the physio could have passed his equipment off as a back stretching device. The demands of accommodating comic speech bubbles sadly relegate the old pervert to the role of distant spectator. 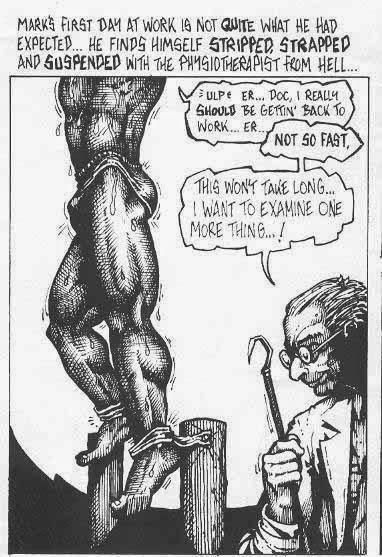 From this direction the restraint arrangement seems even more improbable, but the appearance of a vicious-looking hook will cheer the hearts of fetish fans! The physio looks ever more sinister, the athlete ever more moist and succulent. There's just a suggestion that he finds his predicament a little bit exciting. 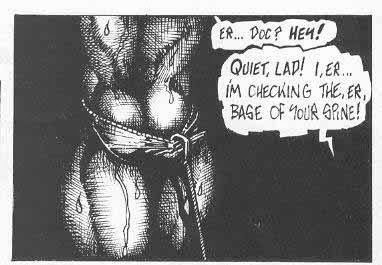 What else would you use a hook like that for? The sight of buttocks peeping out over the top of a low waistband is one of my favourite views. If the helpless jock was embarrassed before he now faces the prospect of his ass being exposed to the old man's lascivious view. 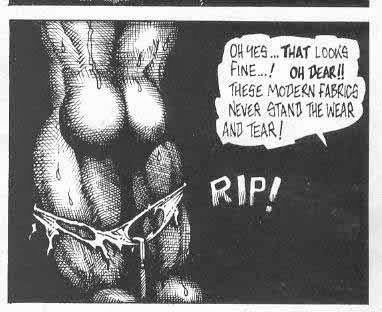 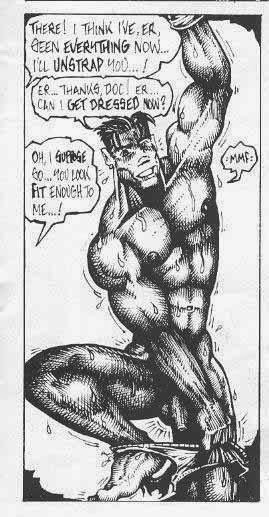 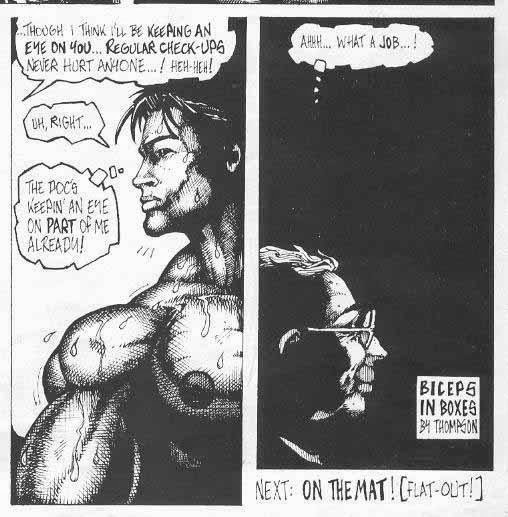 The closing dialogue's a bit odd but there's a nice beefcake study for the parting shot. The physio reflects on yet another triumph by age and experience over youth and enthusiasm.

Regular readers will know I'm a bit of a sleuth, tracking down artist identities and trying to solve mysteries but this one has me beat! I'd never heard of this artist until these pictures appeared on GMBA (current link in side bar) a little while ago. The set is incomplete and I've tracked it down to an identical posting on the Rainbow free site in 2003(!). This looks like a magazine comic strip so there must be more but despite numerous clues in the text I've not been able to discover any more about this artist or his work. Does anyone else have any leads?

For previous articles in this series click on the A-Z label below or search for your favourite artist
Posted by Mitchell at 11:34

Cool artwork for sure ! Great style. But it's a total mystery to me too. -Joe T.