Titus produced art for magazines like 'Bound and Gagged' around the turn of the millennium. There's not an awful lot of his work around but the imagery in them is striking. 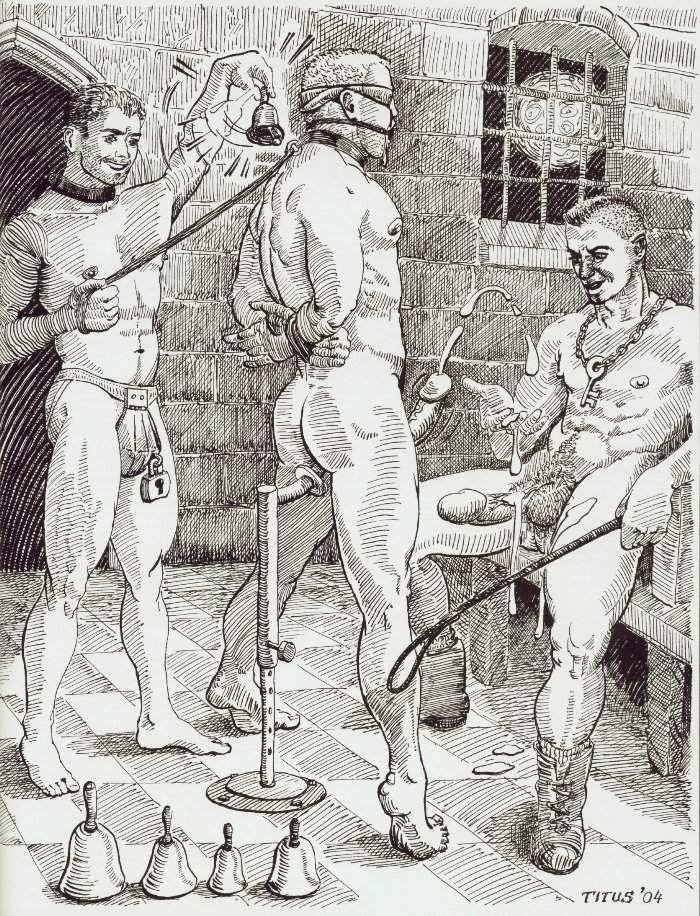 This is one of his best, showing two men apparently trying to train a captive to give a Pavlovian response. He is being forced to induce his own orgasm by riding an anal plug, repeatedly rising up and down on his toes to stimulate his prostate. It would be quite a demanding, physical task at this height, but presumably the conditioning of the captive's libido lends excitement a hand. In Pavlov's classic experiment a dog was taught to salivate at the sound of a bell because it usually meant food was arriving and if you look closely this prisoner is drooling at the mouth as well as his tip. A nice touch. It's not clear what reward he's anticipating instead of food – perhaps his master's intimidating cock or simply being spared the whip. The use of different sized bells are a sophisticated elaboration of Pavlov's idea. I imagine the slave is meant to work harder and harder on his plug as the note of the bell rises in pitch culminating in ejaculation. It would make an entertaining video!

The other striking ingredient of this picture is the master's lackey, in charge of the bell section. He has the striking face of a matinee idol but is a slave himself, locked up in a chastity device of mediaeval proportions. Nevertheless he takes great pleasure in assisting at the humiliation of his fellow captive. Presumably he is not conditioned to respond to the bells himself, otherwise methinks that box would soon wipe the smile of his face. Perhaps he has his own particular musical stimulant!

Titus' drawing captures the predicament of the impaled captive but not quite his effort or the climactic drama of the moment. Compare this picture with Teddy's “Tyrant's Toy” from some years earlier and you'll see what I mean. It's a piece with a similar structure - enthroned master and lackey tormenting a bound slave - but the difference in energy levels and excitement is amazing.

There's actually a passing resemblance to the technical style of Sean in this picture but his earlier work is more naturalistic (see below). 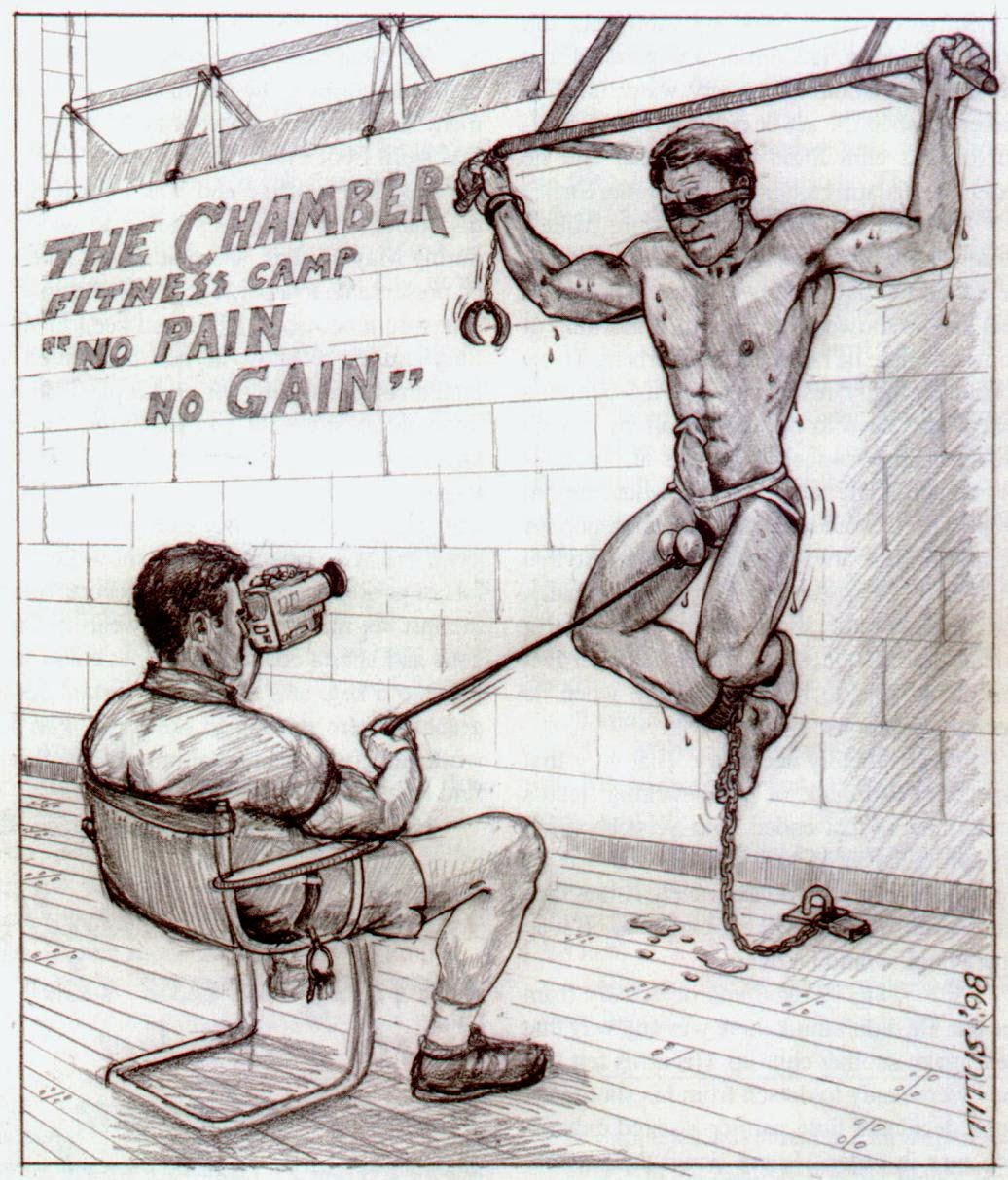 An athlete in enforced training is temporarily freed from his chains to perform physical exercise pull-ups. His supervisor (fetchingly-dressed in short-sleeve shirt and split-side shorts) encourages him with tugs on the scrotum and secretly makes a video record of the humiliation. The relaxed stance of the supervisor is actually highly suggestive of another activity he could carry out with his right hand if he released the rope, it might make an even better picture of humiliation.

This is perhaps the most familiar work by this artist, but it's quite understated and I'm not sure why it seems to be quite so popular. In a way it's a modern, fetish variation of the classical tradition of artists painting themselves in the process of painting their subjects, Valazquez and other classical artists did this and Tom of Finland and Etienne amongst others picked up the artist and model device (without explicit self-portraiture) as a 'legitimate' way of showing a man undressed before another, with all the subtle undertones of direction and control involved (not so subtle in Titus case!). 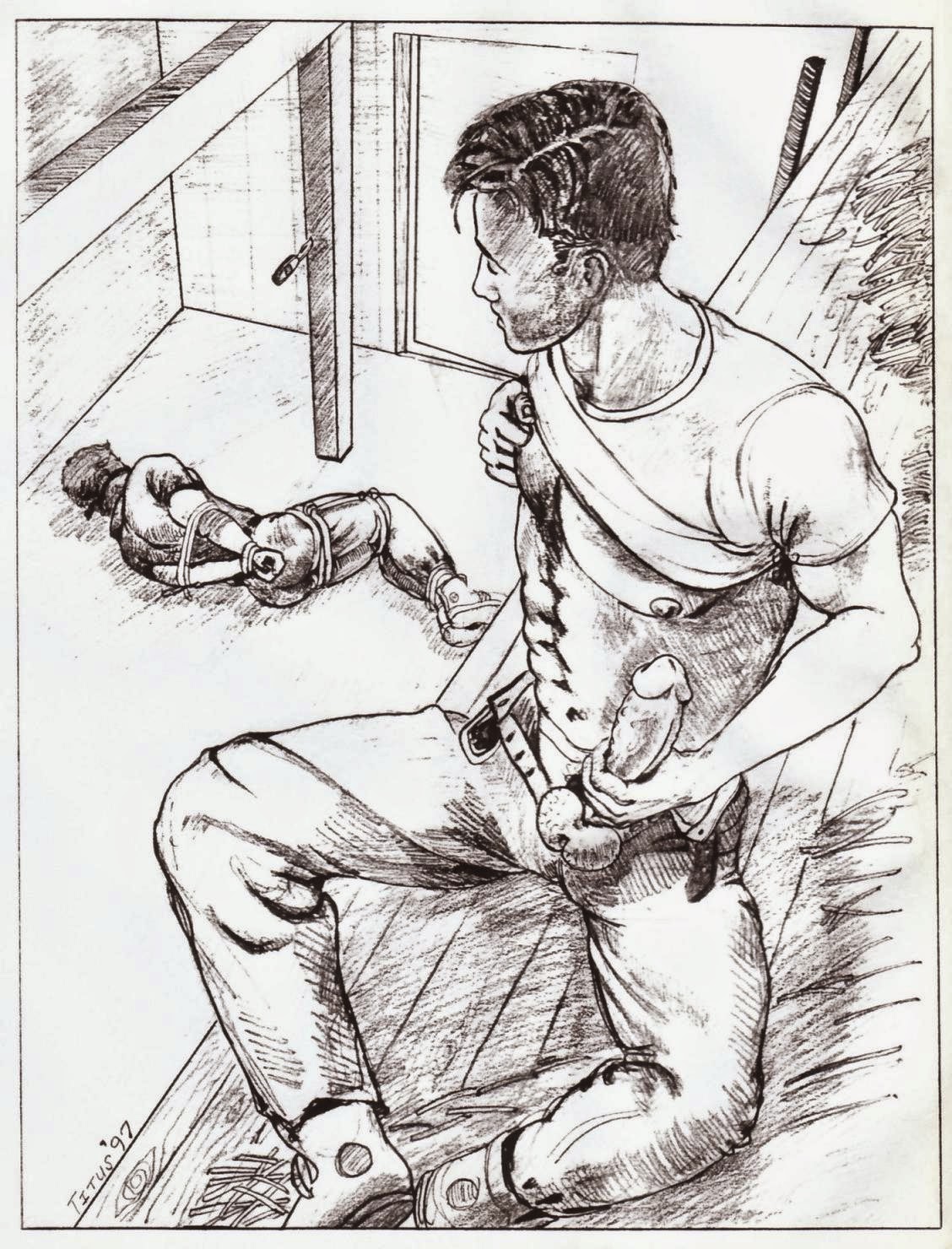 Once again this image features an observer enjoying, and excited by, the 'predicament' of a bound captive who cannot see him. The interesting angle of vision used here draws us in as well, as furtive voyeurs of both men. Once again it's understated , portrayed as a game (note the penknife stuck in the nearby post offering escape) and the captive is even fully clothed (possibly to comply with a related storyline). Watching men jerking off is an over-rated pastime in my book but I find the pose of the secret observer here extraordinarily erotic. Titus draws some interesting men but unfortunately he often seems to have difficulty attaching cocks to their bodies convincingly. As for the challenge of portraying trussed-up men lying on the floor, see my Tagame article. 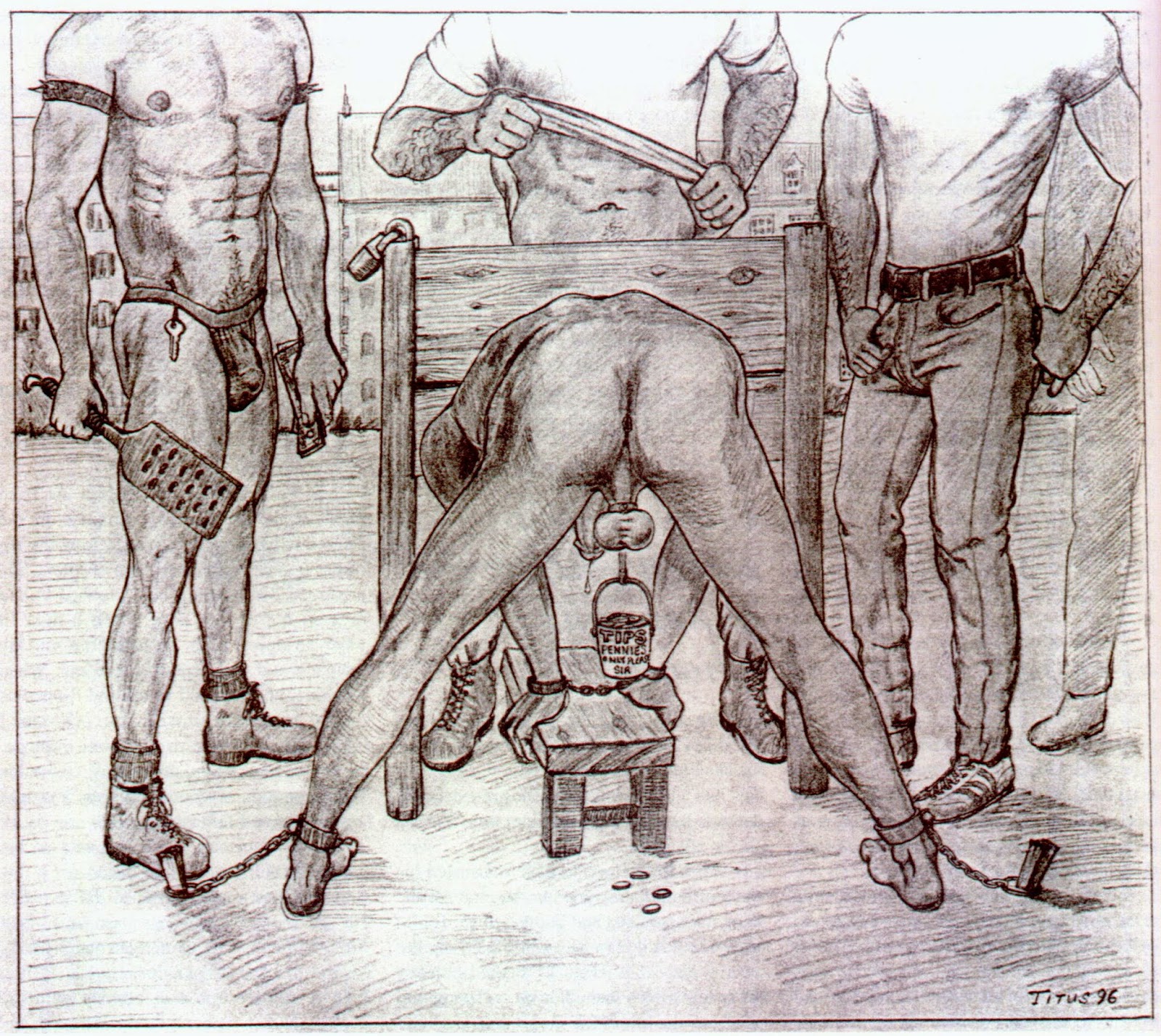 Nearly all of Titus' pictures feature captives being subjected to games and tests designed to humiliate them and this early one featuring a public, college-style hazing represents the most elementary form of this pastime. The humorous slant he adopts is realistic I suppose but tends to dilute the intensity of the fetish fantasy for me. This sort of 'lads together' subject matter reminds me of the work of 50's artists like Spartacus and the drawing style here is similar to his too, but at other times his work resembles the that of Kent (the non-fetish illustrator) and I've already mentioned Sean. I don't think you can pin Titus down.

As far as I know this artist is no longer active and I don't know of a website for him, look in art groups like GMBA (link in sidebar)

For previous articles in this 'mitchmen' series click on the A-Z label below
Posted by Mitchell at 18:43