The Art of Baron 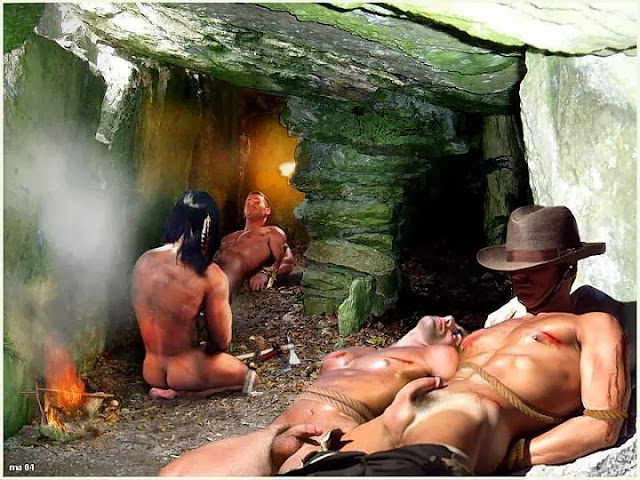 Baron - Injun Revenge
Baron has been producing photo manipulations with strong S+M flavours for some years now. This 2004 image of three Cowboys held captive and tortured by an Indian is quite well known. The power of the picture depends on the viewer's knowledge of the reputed cruelty of these tribesmen towards white men. It's suggested quite mildly by the pec cuts and details like the fire, but it's the wary expectancy of the third man staked out for attention in the cave that really invokes the sense of deadly threat. The lush muscularity and arousal of the foreground captives gives the picture an
erotic dimension for the viewer which is totally absent from the action. 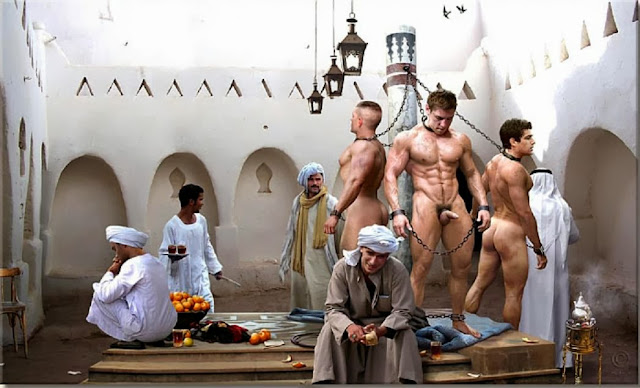 Cruel redskin stereotypes are pretty much consigned to history in our more enlightened times. The people of the Middle East are not so lucky, but this fanciful invocation of a slave market is pure fantasy. Once again, we have three enviable, white hunks held captive, but this time they are facing an uncertain future in servitude. Presumably some cruelty will be involved, but as long as their new owners allow them ample use of gym facilities, they should be OK.

Observe how remarkably clean and uncrowded the market is, Baron's 'realism' is that of the glossy entertainment industry rather than 'warts and all' historical authenticity. This place is actually more akin to an upmarket bordello, where scarce gems like this can be constantly recycled for greater profit. 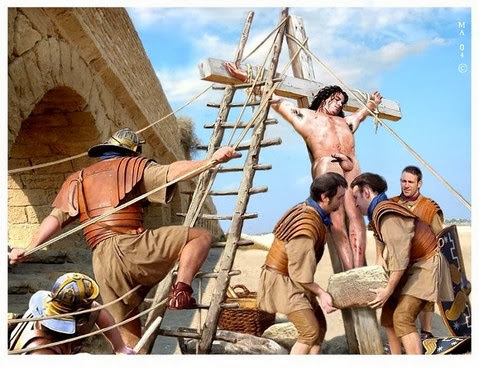 Baron's settings go back to Medieval times and Ancient Rome and he's on safer ground depicting the cruelty and punishments from those eras. In this crucifixion scene, once again, it's the knowledge of what is to come that drives the drama, although the use of ropes instead of nails and the traces of cuts and bruises give ambiguous messages. The expression of the naked victim as he watches the arrangements for his demise being dispassionately completed around him is quite arresting. The crowded perspectives in this picture are not entirely successful, but highly dramatic, lending a purposeful bustle and complexity to the soldier's activities. 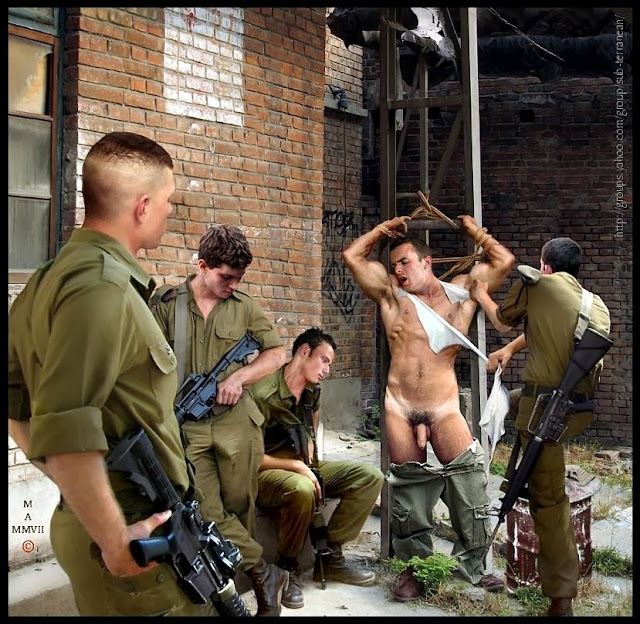 Baron does not simply assemble figures into a composition but manipulates and combines small details from different pictures with remarkable skill, the blending together of the different elements is so fine that it is difficult to 'see the joins' and they appear to be real photographs at first. 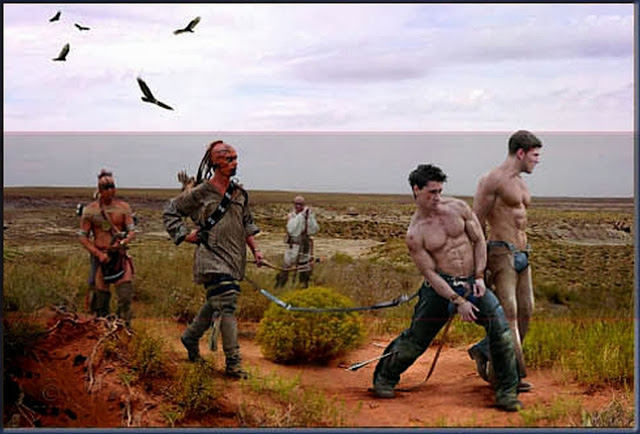 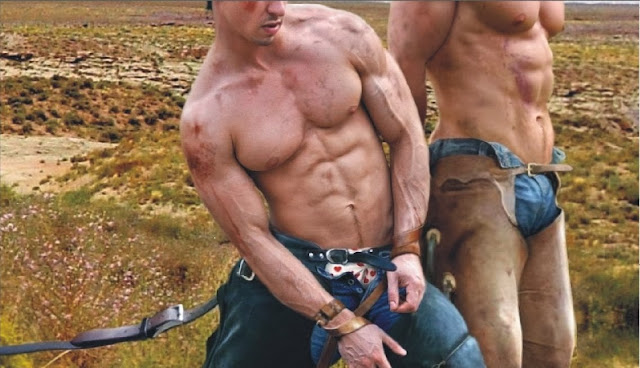 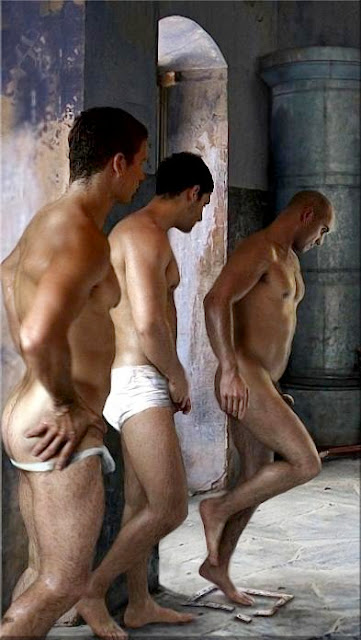 Baron - Disciplines of the Sodomites (detail)

My final example is also a detail of a larger work and I've included it because it is such a beautiful image, not just for the men and the clever use of sexy clothing, but for the interesting, uncluttered setting and the marvellous balance of colours and the lighting which seems to shine out of the picture like an old master. The arrangement of domino-like tiles on the floor appears to be some sort of balancing test and the sense of expectancy created by the on-lookers, next in line is very clever.

Baron sells his work and he usually protects his copyright by releasing only low resolution images and details of larger pictures like those reproduced above. He offers his work for sale through the Subterranean Google Group, publishing tantalising teasers there for lurkers to enjoy. Some of his work used to be seen at Chained Muscle, but that's gone now.
See also 'The Skill Of Baron' , 'Just Out of Reach', 'Baron's Wedge'
plus numerous other refences available via the search functions.

For reviews of other artists who are not part of the A-Z series click on the 'artists' label below.
(Article updated Sept 2020)
Posted by Mitchell at 10:55

Baron an d his Oz collaborator (Borg)are two of the great gay artists of our time.

Agreed. I intend to do an article on Borg as well in due course.