Kalabro is a most interesting artist. In the past he has labelled his pencil drawings using many names - D-extreme, Morpheus, Kal and simply 'K'. He also has collaborators who produce coloured versions of his work with their own names appended - but Kalabro's own style is unmistakeable. 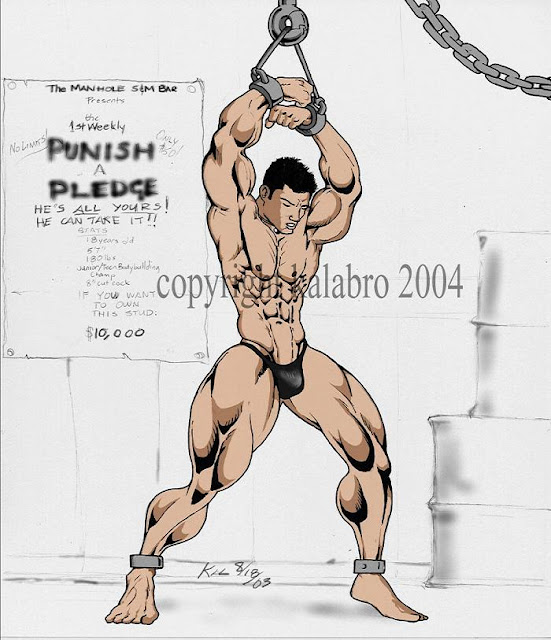 Kalabro - Punish a Pledge
The characters in the pictures are marked out by hard muscles. Their thighs and calves are disproportionately large but grafted onto long slender legs. In action poses these bodies are quite stylish in appearance. 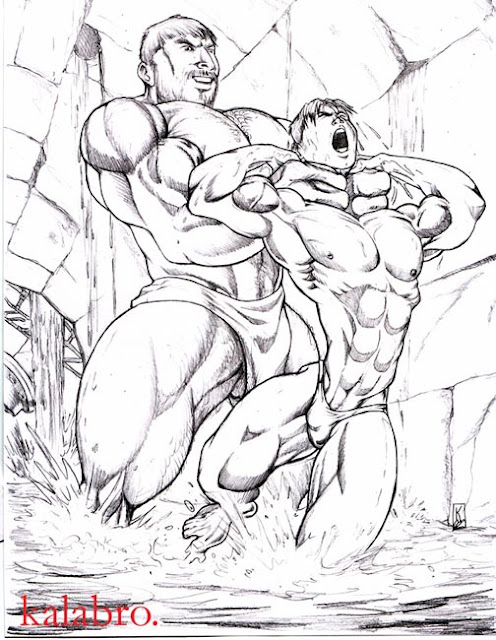 Kalabro - Forced March
He typically depicts cute and muscular young men in peril but the dangers they face are far more explicit and extreme than your average comic hero has to face! They may face assaults on their manhood (of course!), brutal punching, throttling, even drowning at the hands of massive opponents. These are subjects which are unusual in fetish art. Conveying the action of a fist fight or showing underwater scenes is difficult in drawings and I admire Kalabro's ambition tremendously - it lifts his work into a different league. 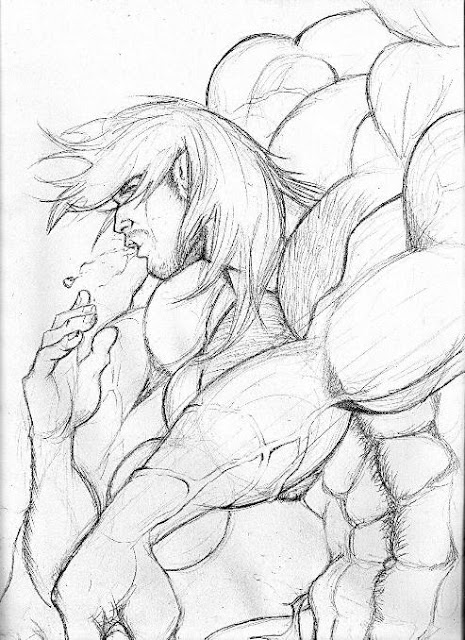 Kalabro - Tarzan Beaten
There is a fantastical element to all these situations and Kalabro sometimes employs stock literary characters like Tarzan, Mummies and Beast-men to add colour and embellish the drama with our shared knowledge of these beings. The Tarzan example shown here is one of his more recent works and the technique is impressive. I like these sketches which have a freshness about them which can disappear in the hard edges of neat final versions. On his blog he regularly shows the development of a picture from sketch to finished article and you can judge for yourself. 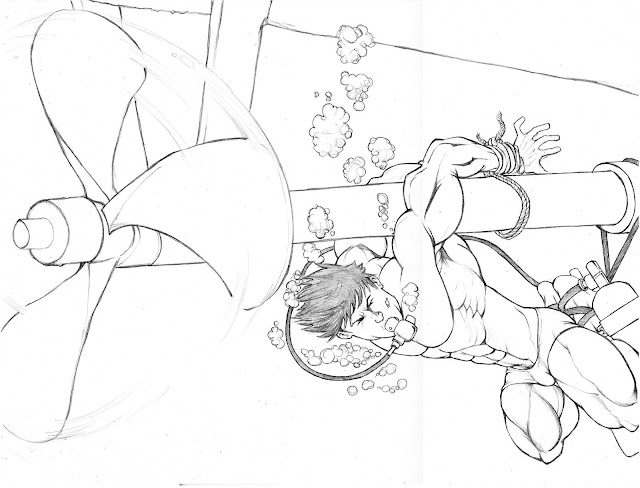 Kalabro - Ben in Peril
Although he clearly draws inspiration from Comic Book imagery, there is a great deal of originality and inventiveness in Kalabro's reworking of these themes into adult entertainment. 'Ben in Peril' is a good example, I have never seen this idea before. The beautiful Ben is menaced not only by the whirling propeller sucking him in but also by the possible loss of his mouthpiece and the inevitable exhaustion of the oxygen cylinders. You can conjecture for yourself how he got into this pickle and what is going on above him on the boat. If you search for Kalabro's pictures you will find his heroes in plenty of even more challenging situations!

Readers are welcome to contribute their own comments - even if they differ from mine!
For earlier examples in this series click on the A-Z label below
Posted by Mitchell at 09:55

'Punish a Pledge' and 'Ben in Peril' almost messed up my briefs! So sexxxxy,Mitchmen!

Kalabro is one of my favourite artists so it was great to be able to read an insightful and intelligent review of his style and some of his work. I only wish that the art samples you chose were of images I hadn't yet seen! ;) I've heard he was quite prolific on a few other sites, which were shut down, before starting up his wonderful blog.

This image appears to be taken directly from an early scene in the opening episode of the miniseries "Harper's Island."

This hapless briefly referenced character ends up the first victim of a serial killer. The premise of the show was that each week one character would die. CBS ran a contest where you had to predict who was the killer, which wouldn't be revealed until the last episode. It was an interesting concept. The show was something of a guilty pleasure, but this was probably the most inventive kill on it.

Do you know why the Kalabro blog has been removed? I really liked his artwork and hope he'll be back!

No I don't know what has happened.
Thanks for alerting me.
There seems to be a shadow blog at http://www.bloglovin.com/blog/9163675/kalabro-art-blog, but it's not working properly, being linked to the blogger posts.
I wouldn't have thought the content of his pix would be considered deletable. Perhaps he pulled out for personal reasons.

Well, much to my surprise, Kalabro blog is back! I'm very glad to see it's return.

It happens, this blog was taken off the air for a couple of weeks a few years ago and then restored.

Thank goodness it's back! :)

I just happened to google myself and came across this blog and the awesome discussion of my drawings! I'm flattered--actually, your descriptions of my work turn me on as much as drawing them does! Thanks!

Well we can all look forward to the results of that excitement!

Indeed, the "Ben In Peril" piece was based on the first murder in "Harper's Island." That scene was, for me, quite hot--a hunky young man tied to a propeller shaft, being inexorably drawn to the spinning blades...and then, WHAP! (the episode's title, if I remember) as the huge blade first knocks him unconscious and then, as the blades speed up...