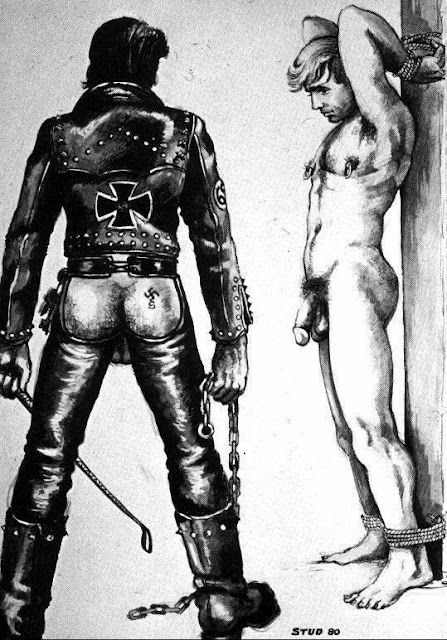 Stud's art dates from around 1980, a time when fetish publishing in the UK was testing the boundaries of new-found 'liberation' from censorship. In a way, though, it seems to look back to the 50's/60's and the traditional, leather biker in this first image illustrates this. This is not the civilised, leather gentry of Tom of Finland's work but a fearsome Hell's Angel, whose unkempt hair, oversized boots and lewd clothing suggest a rough and lascivious character. In startling contrast, the victim awaiting his due seems quite normal, an average guy with an attractive face, coiffured blond hair and trim physique. Only the generously-sized nipple rings give a clue that he's a signed up member, but you sense a chasm of character and lifestyles between them (class if you like) that seems very English. The drawing of the biker is a little stiff (it's the iconography that creates his menace) but for my money the rendering of the bound captive is exceptionally good. 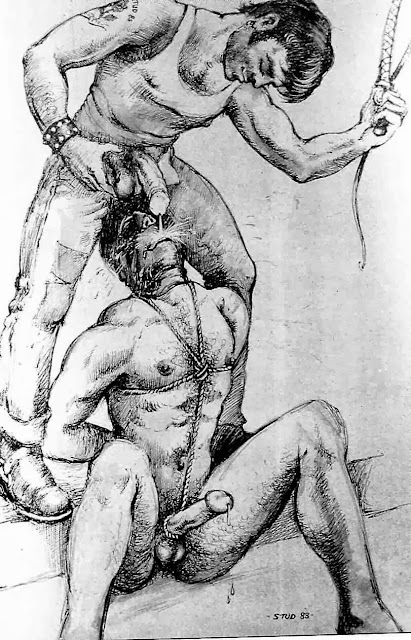 The second drawing of a water-sports scene has a curiously naïve feel, the tough guy arches awkwardly (almost protectively!) over his captive to make a pissy connection. It's as though space has run out at the top of the picture and he's being squeezed in. The whip and other symbols of butchness (tattoo, stubble etc) are somewhat undermined by this boyish awkwardness and also his rather cute face with it's luxuriant eyelashes. The technique is sketchy but the shading technique is actually quite sophisticated. Overall, the picture seems charmingly naïve and if you have seen Thomas Waugh's collections of early gay art you'll probably remember seeing other pictures drawn in this way. 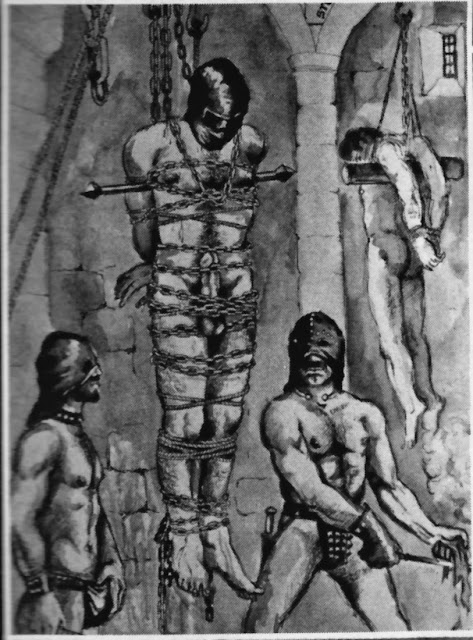 This dungeon scene also has a retro feel, recalling times when pseudo-historical settings were regularly used to provide 'cover' for S&M imagery. The detailed texturing of the background (including disturbing streaks on the walls) greatly enhances the brooding atmosphere. Stud had a fondness for hoods on both prisoners and torturers and he's also gone to town with the chain restraints here. The unadorned prisoner, hanging around in the background, awaiting his turn, makes a nice contrast and reminds us that the leather gear is here is not mere costumery, selected by the wearer, but an intimidating part of the ritual. You have to search a bit to discover the exact nature of the ordeal Stud is portraying, the hot clue is nearly out of the picture. I can't tell if this is artistic discretion or more of the clumsy 3rd party cropping you can see at the top. This picture appears to have been shaded with washes, suggesting the original was coloured but I've yet to see a coloured Stud picture, low circulation magazines at that time were predominantly black and white. 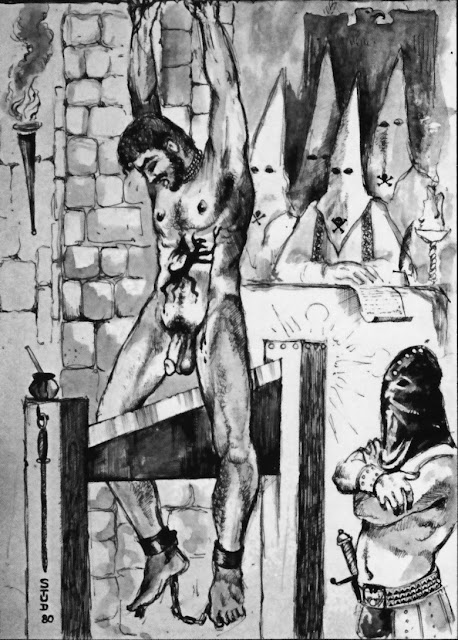 Stud's approach to S&M is pretty uncompromising, so his version of 'riding the wedge' replaces the usual chamfered, wooden beam with a fearsome sharp blade. (click on the label below for more examples). The prisoner, sympathetically portrayed once again as an average, young man, dangles above, clinging on by his fingertips to delay the inevitable ride down the sloping blade. The whole scene is lit by an 'authentic' flaming brand. Meanwhile the torturer and inquisitors look on with emotions concealed behind ceremonial hoods which have all sorts of unpleasant, historical associations. There's a kinship here with the strange dungeon imagery of Les Farnak. 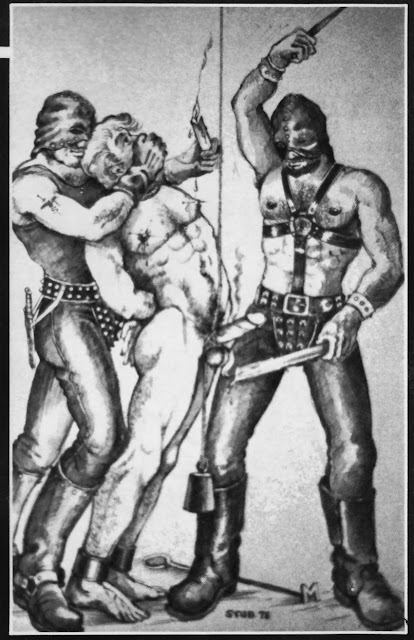 The final picture seems to me to epitomise Stud's art. At first it is mildly shocking. The activities in progress - piercing, waxing, hair burning etc - are really not so terrible as fetish goes, but Stud suggests there is far worse to come. However, it is his characterisation of the bound victim that gives the picture it's edge. With slender body and luxuriant blond hair he seems to epitomise a healthy, carefree, 'normal' youth whose presence here seems quite out of place, although he is clearly aroused by the attention. The torturers suppress his cries and go about their work (corrupting the innocent? punishing the privileged?) with grim, merciless smiles.

Stud's art seems to make a point of placing ordinary men at the mercy of dark and evil captors who revel in their power over the seemingly innocent (or uninitiated perhaps) victim. Despite the limitations of his drawing technique, it's a very powerful, angry message. I have hinted that Stud may have belonged to the 1950's generation, a seriously oppressive time for gays in the UK and these pictures, coming as they do at the dawn of modern liberation may represent something of a primal scream at the injustice of it all. These days he is something of a cult figure and we can just enjoy his pictures for their raw erotic power.
I haven't found any site for Stud, his porny name makes searching pretty hard. He may be represented at gay museum sites but I can only suggest the GMBA archive (current link in sidebar).

For earlier articles in this series, click on the A-Z label below
or search by name in the masthead box.

Certainly Stud is a much underrated artist,and I only have seen about 30 of his drawings. I did not see his work in UK magazines - I would have thought it would have been a bit strong for them at the time,though they were in the Scandinavian Mr SM and Toy magazines through the late 70's into the 80's which were also widely sold in Germany,France and the Netherlands. He must have been British as you say. But no one knows who he was? Interestingly a lot of the art and gear seems to have a 50's/60's/70's feel to it so I suspect this artist may indeed have been of that generation. Although a lot of Stud's work is about torture,Some of the work is simpler leathersex . Stud had a way of drawing rough chunky leather quite unsurpassed by any artist,even by TOF I think.