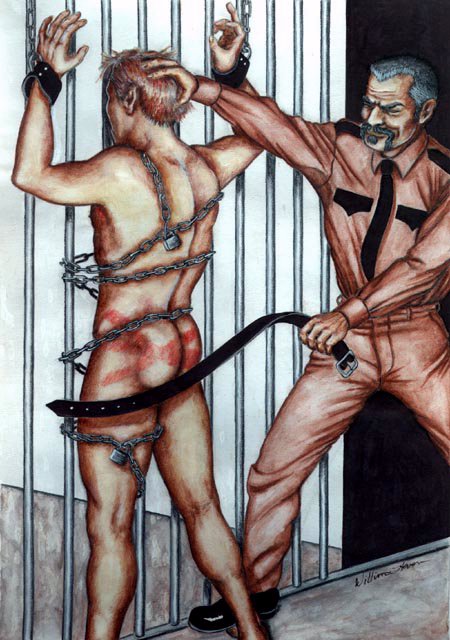 Stevens - Jail Belting
In stark contrast to Steven's lollipops, the work of William Stevens shows SM scenes with powerful action and emotions. See here the concentration of the prison guard as he lashes a chained-up prisoner with his belt. Despite the static, restraint position, there's a sense of energy in the guard's exertions. Amusingly, he's standing on the prisoner's foot which shows true sadism, although this indulgence surely must impair his swing! The detailing of the face and the back of the hands, in this and the picture below, show an observant eye. 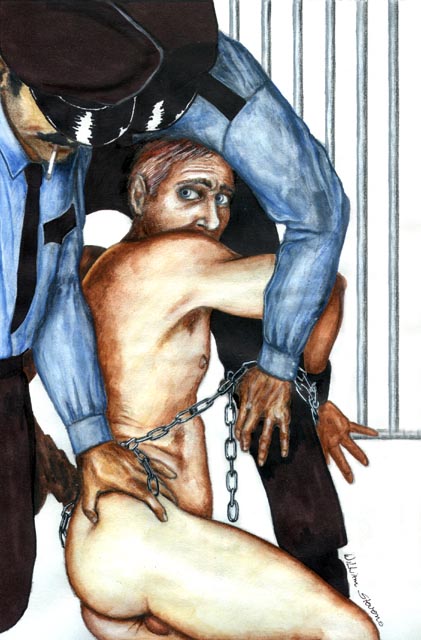 Stevens - Jail Assault
In this picture, the fear in the eyes of the prisoner is portrayed so convincingly, that I suspect it might take the subject beyond the realms of entertaining erotica for some fans. This image is beautifully composed with the guards crowding in around their naked victim, forcing him to show his backside - sensuously rounded buttocks and a tantalising glimpse of undercarriage. You can sense the guard's cigarette quivering between his lips as he savours the sight! Note the mysterious shape projecting from the his groin area and looking suspiciously like a disguised cock. A case of hidden eroticism that scarcely seems warranted, in what is already a fairly unambiguous subject. Must be British!


In fact, I don't have any information at all about this artist and would welcome any advice from my readers about him.


For other examples of 'hidden eroticism' click on the label below


For earlier articles in this series, click on the A-Z label below
or search by name in the masthead box.
Posted by Mitchell at 09:10