This is an artist I have revised my opinion on recently and I have redrafted this article (Oct 2014) to reflect that. His work is pencil drawn and you get a sense of his polished style from the dramatic scene below. 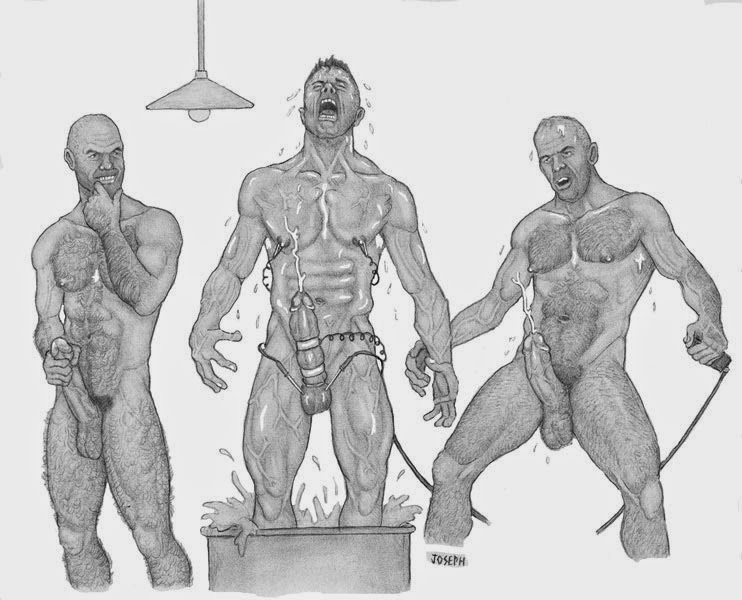 This is an audacious imagining of an electro-torture experiment, full of drama with all the men showing varied expressions of lust, pain and amusement, giving the image an unusual depth. Joseph draws from live models and this shows in the variety of authentic-looking faces and bodies but some of the resulting compositions can look a bit posed, lacking true engagement between the characters. This is not to single out Joseph who obviously is very talented. You can see the same effect in some of Tom of Finland's later works which are magnificent realistic drawings but lack the spark of his earlier, less studied work. 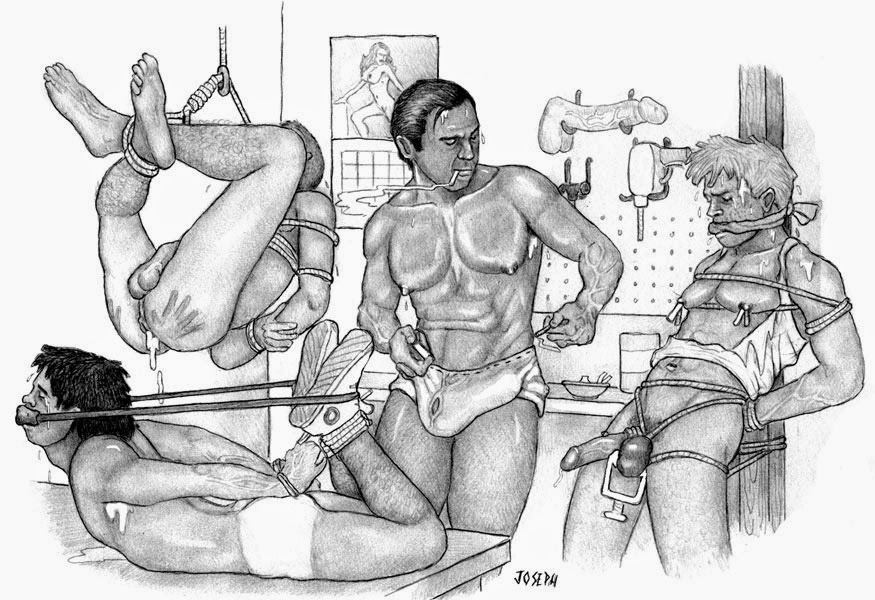 This scene is something of a fetish convention. An apparently 'straight-acting', muscular man pauses for a ciggy break in the middle of putting a group of interested youths through their paces in the 'tool' shed. At least I assume they have volunteered for this class and not been caught vandalising his dahlias!  Having already dished out some spanking, clamping and serious pain restraint, he now seems to be pondering the possibilities offered by his lighted cigarette. The portrayal of the older man in this picture is fascinating and the inclusion of background detail helps to weld the figures together. 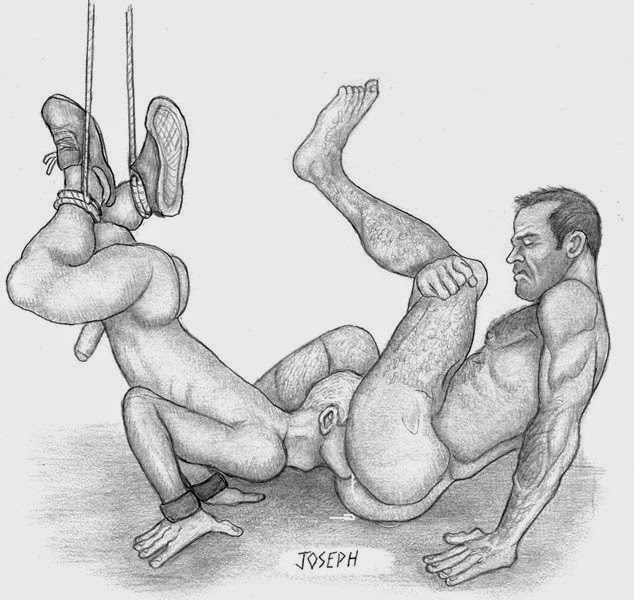 Much of Joseph's work deals with inter-generational stuff – some of it too near the knuckle for my taste. But the upside of this preoccupation is some splendid renderings of older men with mature faces (not necessarily pretty) and hairy, trim bodies. Note the attention to detail here in the hairy, veined arms. Some of Joseph's pictures are very raunchy. 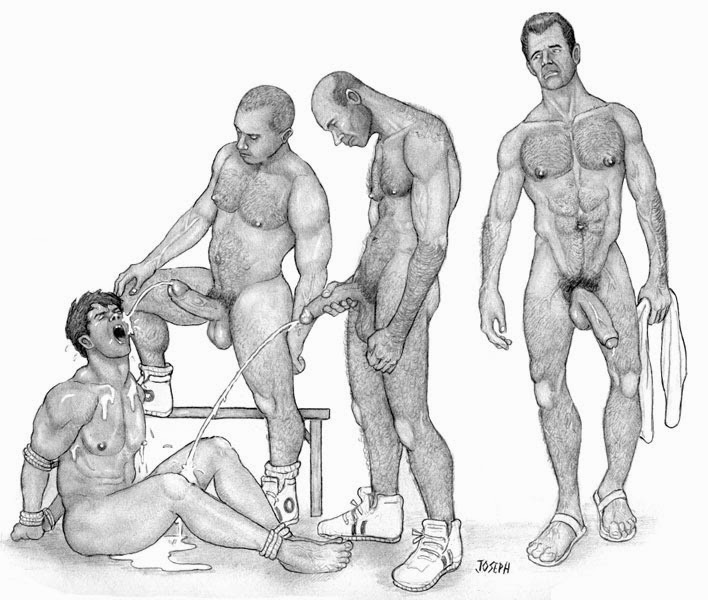 A locker room scene which invites the viewer to imagine what has gone before. The slightly anxious expression on the new arrival's face is very intriguing! Water sports are not the easiest fetish to draw but this is a good example. You may recognise the seated figure, it's copied from a vintage photograph which also circulates widely with Marky Mark's head superimposed. 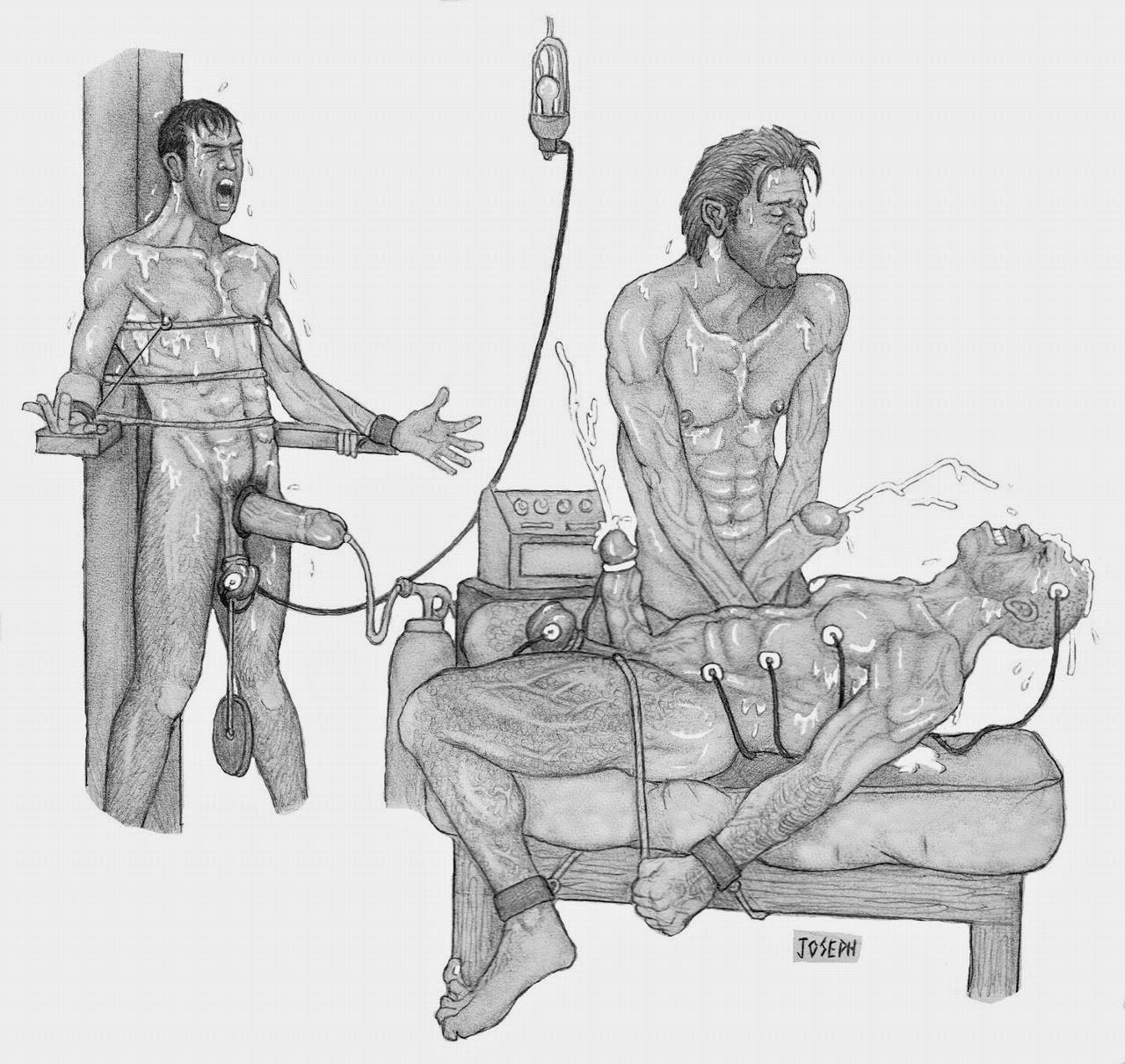 No age issues with this dungeon scene, which is just as well considering the advanced level of S&M portrayed. I would say don't try this at home but the technicalities of the electro and pumping tests shown here wouldn't help you much in emulating it. The artist has comprehensively captured the pain of the captives through their agonised expressions, distended veins and tensed limbs. Note the over sized feet (shades of Palanca) complete with frantically twiddling toes! The man on the bench is clearly suffering the most but one suspects his colleague is merely 'on hold' pending his own examination.

(This article completely revised, October 2014)
For earlier articles in this series click on the label A-Z below.
Posted by Mitchell at 10:11