David Eastman also depicts captivity but his art is at the other end of the fetish scale from El Churcho. He depicts rough looking characters - long haired bikers and pugnacious, short haired muscle men. They ain’t pretty but they conjure up a strong masculine sexuality. They are usually engaged in rough activities too - wielding painful whips or dishing out spankings or wet humiliations. 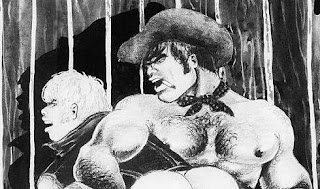 There are hints of smiles - sometimes on the victim’s face (see first illustration) - but these are not playful - these are knowing smiles of triumph. The viewer is in no doubt that serious S&M struggles are going on. The second picture shown is just a detail from one of his best pictures in my collection. The characters look as though they are discussing their next move for the captive. It shows his sophisticated shading technique and use of a low viewpoint to create dramatic effect. The placing of the figures and use of architectural detail is clever. No mere scribbler this! 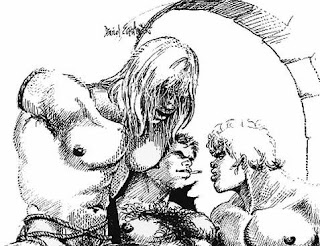 Thanks for the introduction of a new artist to me. Wasn't aware of Eastman, but his work sure looks hot. Great faces.