The Art of Gilgamesh - 2

You can start reading from Part 1 of this mitchmen series

In some of Gilgamesh's early work he shows horned devils administering torture to their unfortunate captives. This one employs the classic back-breaking torture wheel, a spectacular device with a medieval ancestry, although it's method of use remains somewhat obscure and in some accounts is almost incidental to the punishment. Here Gilgamesh seems to see it as a type of rack for stretching victims.

It's noticeable how he shows the two protagonists looking towards each other. The prisoner is not simply enduring his torment stoically, as is often the case in pictures like this, but showing emotion at his predicament. He might be pleading for mercy, expressing defiance or simply watching with dread for the next turn of the wheel but his feelings are part a significant element of the image.

The interaction between the Devil and his captive approaches intimacy in this image. An ingenious frame with an adjustable back bar forces the prisoner into an arching position, similar to that on the wheel above. This allows his Devil to sexually tease and intimidate him at close quarters, his cock straining to escape from a holster-like G-string. The Devil is wearing an executioners mask here but it's not clear if his horns are real or merely a scary decoration incorporated into the mask.
The background is dominated by an incongruous electronic device reminiscent of 1950's Sci Fi fantasies and Frankenstein laboratories. It stands against the wall glowing ominously. In the dim shadows we can see a more traditional dungeon accessory - an antique iron cage. A more mundane device sits on the table, a cut throat razor, possibly used to shave the prisoner of his manhood-defining body hair but it's super sharp blade always poses a threat. 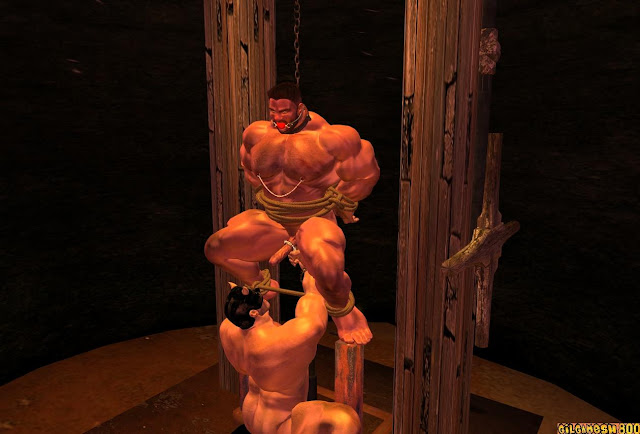 This is a complex torment worthy of of the Devil's reputation in the Christian religion and given the artist's Latin American background, it's tempting to make that a connection with these pictures. The Christian cross is actually shown on the wall in one of his  ''Heroes in Peril' images, as though referencing the tortures of The Inquisition. However that is an isolated example as far as I know and it's not obvious that these religious references have any deep meaning for the artist or are anything other than cultural.

In his more recent work Gilgamesh substitutes other, unearthly beings for the Devil and draws on more 'modern' fantasy and game play scenarios. Thus this picture is based on the concept of a 'demon hunter', one who is better at finding them than eliminating them apparently. Gilgamesh describes him (the captive!) as a stud and he's certainly impressive with a particularly well-moulded, smooth body which contrasts dramatically with the wizened and wrinkled face of his captor.

I suppose demon physiology is not necessarily the same as human's but this wrinkled face does not conjure up old age so much as a very long experience of  debauchery. So it's not surprising that having taken possession (as it were) of this interesting human foe the Demon is anxious to show him what he's been missing.

Once again here we can see the captive's reaction. It looks like he's gritting his teeth as he deals with the initial restraint and pain, perhaps less conscious as yet of his sexually teasing display. I imagine there's going to be a lot worse to come.

Other beings appear in Sergei's Desert Adventure ( a rather light-hearted term for what is about to befall him). Initially we see an extremely mature man, grizzled and exceptionally hairy, trekking across the desert. We know only that he is exploring, in search of adventure presumably, perhaps loot. He looks like a powerful, capable man, but details like the heat haze and his sweaty brow indicate that this trek is taking it's toll.

Eventually he finds an Oasis, a surprisingly luxuriant one.
He drinks some water, enjoys a refreshing swim and then falls asleep.
Gilgamesh invokes the power of rendering to create an idyllic scene,
notice the realistic reflections in the water
But Sergei is not alone.
Gilgamesh describes this horned creature as an 'imposing imp'.
It appears that this oasis is one of his haunts, which may account for it's incongruous fertility.
He finds Sergei asleep, naked and defenceless, and likes what he sees.
Arabia is not particularly well known for it's imps, but it is the land of enchantment.
Sergei awakes to find himself trapped in a magical web.
He tries to fight back but is eventually overwhelmed by the imp's spells.
In this sequence Gilgamesh uses imaginative imagery to convey a sense of glittering, magical manifestations gradually enveloping and overpowering Sergei.
The imp is not only able to entrap Sergei with his magic,
he is able to materialise metal fetters and chains to permanently secure him.
He leads his captive out into the desert.
Using Magic to capture men, like drugging them, seems a bit of a cheat, but the end result seen here is a splendid image - a powerful man suddenly enslaved and dragged off like a chattel - for no apparent reason. He joins other forlorn captives at mitchmen blog, forced to cross the desert to an unpleasant fate in images by Chirenon, Bowen, Modus Vivendi, Amalaric and an unknown photo-shopper,
I won't reveal the entire storyline of Sergei's little epic (which appears unfinished at the time of writing but already runs to 143 panels) but I will mention a particularly nice moment in Part 2 which sees Sergei taken into an underground lair. His arrival causes enough of a disturbance to distract a second imp who has been amusing himself with another 'Adventurer'.
His captive is an impressive man at first sight, younger and more clean-cut than Sergei, but despite his many attractions he's still less desirable than the older man, apparently. In this intriguing insight into the artist's thoughts, instead of welcoming the unexpected relief from impish torments, he almost seems to resent his sudden abandonment.
Gilgamesh has come a long way from that hunky young bodybuilder we saw in Part 1.
Read Sergei's Desert Adventure at pixiv
~
Other supernatural beings entrap a would-be plunderer in 'Igor's Adventure'
Igor's is another extended story (currently 94 frames at the time of writing) and it reads like a classic labyrinth game. He is seen running through a maze of vaulted, stone corridors. There he encounters a strange creature (Gil describes it as goblin-like). It is clad in fetching leather (rubber?) briefs and kneels respectfully before him. Igor advances intending to kill it (just to be on the safe side presumably, in true gaming style). However the wily creature shoots drugged darts at him and brings him down.
While Igor is unconscious, the creature decides to make him his slave.
He strips him of his weapons and all his clothes and starts to restrain him in 'enchanted' shackles.
Placing a captive in a seated position to tie him up is not an easy strategy but it makes a more interesting picture than the more conventional approach of tying up the man where he has fallen.

Igor's Adventure - Part 2 p13
Igor regains consciousness just as the creature is strapping a hard, metal ball-gag in his mouth. Realising what is happening, he leaps to his feet. He towers above his malevolent captor in this splendid image, but with his wrists and ankles clamped in iron fetters while he was unconscious, he discovers there isn't a lot he can do to him. The creature grins back at him.
This is a rather splendid imagining of the paradox of the giant rendered helpless by a smaller foe.
The giant, metal collar seems to embody the enormity of his humiliation.
Igor panics and does succeed in kneeing the creature out of the way so he can make a run for it.
Restricted by heavy shackles it's an act of pure desperation and a measure of his fear.
The creature easily catches up with him and leaps onto his back.

With the creature sitting on his shoulders, Igor finds he forced to obey it's commands.
It directs him to descend into the dungeons.
This imagery seems to draw on very ancient roots and symbolism. It visualises the idea of 'the devil on my shoulder' but for the life of me I can't think of a literary example though it feels like there ought to be one in the Arabian Nights, Lord of the rings (Gollum?) or John Bunyan even. I'm sure it's popped up before in this blog but can't find it.
At the foot of the stairs a dungeon awaits (you guessed!).
A second creature helps to release Igor's fetters and chain him to the wall.
Igor's balls are chained to a lug set into the floor of the cell.
His captor stays to play with him, drains him and then leaves.
The skull on the floor suggests that if his captors have anything to do with it, Igor's adventure will end here. That sense of isolation and abandonment haunts much of Gilgamesh's work. But Igor will have more duties to perform first, for as the creature leaves, he is already planning to return and 'adorn' Igor some more.
~
More Gilgamesh in Part 3 (link pending)
Links are given in Part 1 of this mitchmen series