The Art of Amalaric Part 9b - Abducted 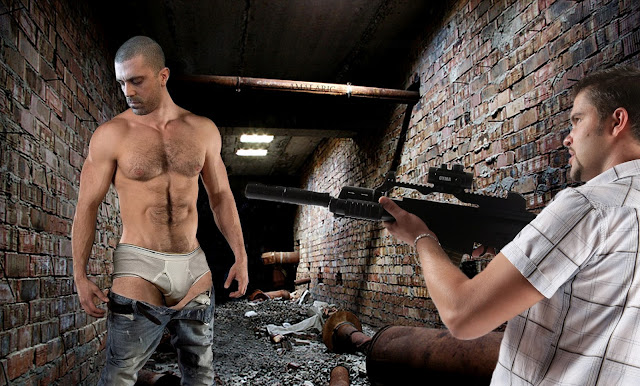 The title of this piece and the image just above give little inkling of just how different 'Abducted' is to Amalaric's usual fare. Kidnap at gunpoint is cruder than than his usual methods, but it's an efficient, business-like technique that reflects all that is about to happen to Rob McGuire. He has been lured to this place in a professionally-planned operation.

Rob is the owner of a Plant Nursery (yes, another gardener). His occupation gives a tenuous, ironic connection to what follows. A connection that has nothing to do with lust for his hunky body, lightly dusted with hair, oozing with masculinity with underpants that reek with......sorry, where was I?

Amalaric paints Rob as a family man with powerful libido. He looks like a tough guy but his embarrassment at being forced to perform the 'jeans-drop' in this desolate, debris-strewn tunnel shows more appealing qualities, none of which will help him in the days ahead. 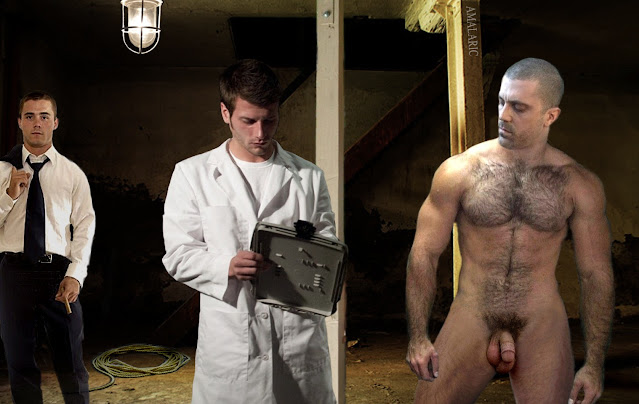 Rob discovers he is the captive of a well-organised business. A professional-looking, suited character (left) keeps tabs on all his processing. Here he is being subjected to a detailed medical examination (by a medic who in another job gave Rusty Stevens a torrid time in a water tank). As you would expect Rob's assessment is more prolonged, more invasive and more embarrassing than any you or I might have ever experienced. It concludes with the forced production of a semen sample by means of a painful, electro-stimulation of his rectum.

Apart from this short, sharp shock and a refusal to return his clothes, Rob is treated relatively well. For the next two weeks he is given a regime of good food, plenty of exercise and adequate time to relax. Nurtured like one of his own plants, you might say, although it feels to him more like the proverbial mushroom treatment rather than being treated a greenhouse specimen. He resents being fitted with a chastity device during this time but dislikes it even more when it's removed for him to produce a daily sample. His puzzlement about it all continues beyond the scene above. 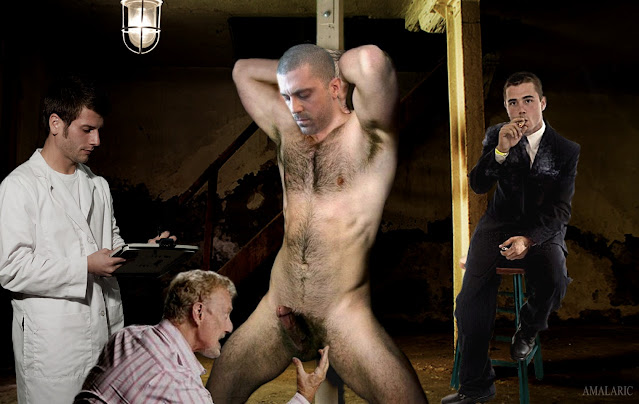 All is revealed when his captors explain that he has passed his tests with flying colours and all they now want from him is a quota of sperm. One litre to be exact. Notwithstanding Rob's impressive virility, this is expected to take several more weeks. Worse still, he learns that the 'production' semen has to be extracted by the hand of a specially-trained milker in order to guarantee quality. The resolutely heterosexual Rob refuses to co-operate and suffers the usual punishments meted out to slaves in Amalaric's Universe. At length. But he isn't a slave, at least, not in the usual sense.

Eventually he complies and they stop punishing him. He goes on to develop a touching relationship (as it were) with his milkman (seen teasing him above). I won't reveal the ritual of extraction or what happens when his task is complete, but this is a refreshing and enjoyable tweaking of Amalaric's normally gloom-laden format.

Read 'Abducted' @GayBondageFiction
It's a Paysite but Chap 1 (of 4) is free to read.