The Art Of Amalaric 9c - The Barbarian Prince 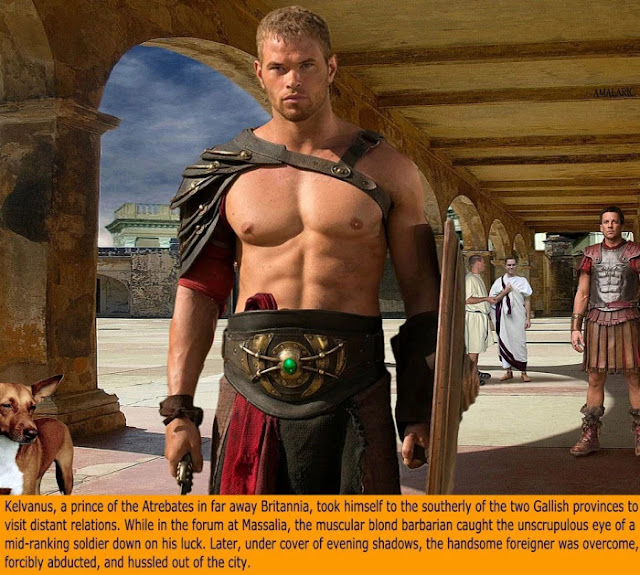 'From Barbarian Prince to Roman Slave' is the self explanatory title of the story of Kelvanus, a British leader in Ancient Times who finds that visiting the Continent to visit relatives is not without risk. His story has some similarities to that of Owein the Celt in 'Ancient History' (Part 2 of this mitchmen series, picture 211 onwards). However, it's the beautiful imagery that draws me to it, not least the handsome man who plays Kelvanus. He is also gifted with some memorable clothing and settings in which to play. I'm not usually a fan of historical costumery but the hero looks terrific in this scanty garb with the chunky belt of a champion and just a hint of S&M interest in the harness and shoulder armour. Usually, though, it's better to dress down when visiting foreign lands, particularly those where slavery is practised. 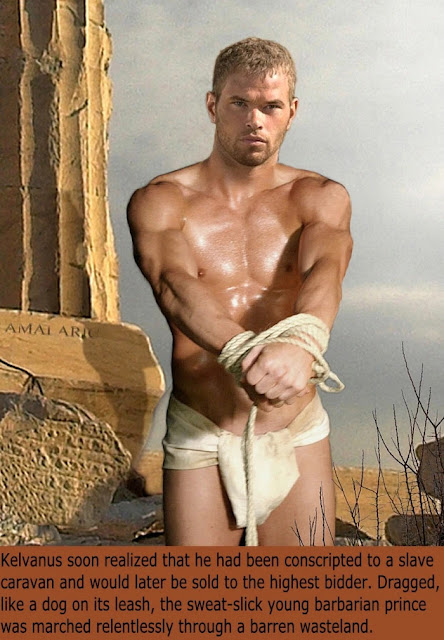 This image of Kelvanus in captivity makes a stark contrast with the holiday snap above. He's reduced to a loin cloth now with ropes substituted for his weaponry and finery. The ruins behind him and barren desert beyond sum up the bleakness of his situation. His ginger hair has begun to bleach in the torrid sun. Sadly for him, the luscious, sweaty muscularity revealed by stripping off his clothes has only enhanced his desirability as an acquirable object.

We know little of what Kelvanus is really like as a man, but if he could be compared with a modern prince we might expect to see his outward attractiveness and record of military prowess complemented by a wayward, sometimes wilful spirit. He might be inclined to rebel against his family and perhaps forge inappropriate and troublesome relationships. As a result, there might be those in his family who will shed few tears over his forced conscription into the ranks of unpaid, physical, hard labour in a very distant land. 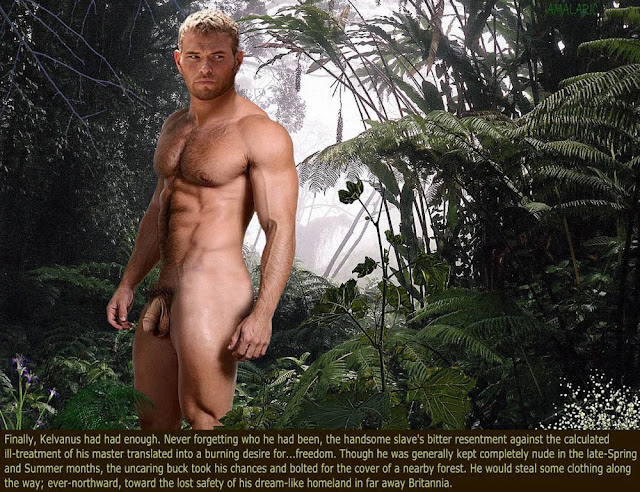 We learn little of Kelvanus life as a slave except that it's awful and so he escapes. I love this picture of him wandering into a tropical forest which seems the very epitome of freedom. Pitching a naked man into the 'rawness' of this lush greenery would work as an image even without the storyline of an escaped slave trying to evade his pursuers. Imagine him as a modern Prisoner of War who has also escaped from his captors.

His nakedness shows how completely his captors have tried to subjugate him, but he has shown he still has the spirit to escape. Nevertheless, he looks around dubiously here as though sensing hidden danger close at hand in the murmurs of this alien wildness. Dangers which he is ill-equipped to deal with since he is 'sans everything'. The ferns and leaves reach out to brush his thighs reminding him of that fact and responding to it, drawing him in.

Beyond him, a bright but misty clearing seems to suggest now the place he has come from wasn't that bad, although it's murkiness might shroud the closeness of his pursuers, or perhaps mark the approach of a strange denizen of the forest which harbours malign intent towards 'intruders'.

Putting cute models into 'back to nature' settings like this is a stock device for photographers but somehow here (by pulling back and using dark tones, I think) Amalaric has given the forest that slightly sinister 'presence' that is more than just a pretty backdrop. 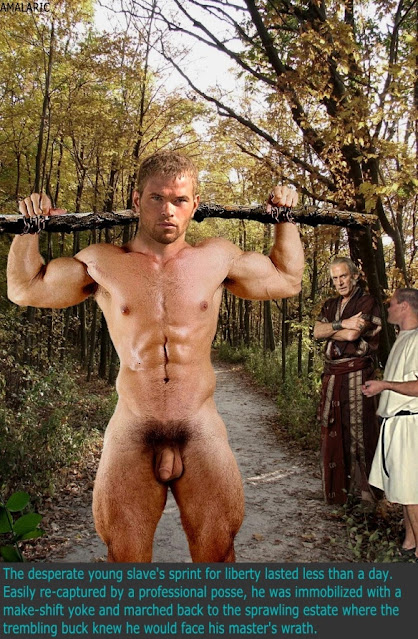 Kelvanus's forced return to the 'normal' world is marked by a brightening of the light, but there's a distinctly autumnal atmosphere. As he stands on the muddy path, yoked once more and awaiting collection by his master, the falling, dead leaves mark the end of his dream, the approach of winter and the remorseless, unheeding passage of his seasons in captivity.

Those who recaptured him are nicely modelled here, standing back as though fearing contamination or an attack, or any suspicion of association with him when his master turns up. In this world you trifle with an immobilised, naked man that doesn't belong to you at your peril! They chat, perhaps speculating about their reward and about his punishment for running off. They may be hostile to him (ungrateful, foreign slaves, I hope he gets 100 lashes!) or perhaps more sympathetic (poor blighter, but the bounty will come in useful). It doesn't matter, it's all the same to Kelvanus now.

Read the whole 'Art of Amalaric' series from Part 1 - A Slave To Passion
Posted by Mitchell at 09:31