(For an explanation of the image sizing and blurring, please see my footnote below).

This Royale Studio, 'Sailor in the Rigging' group is an example where the model is not tied to the ropes to simulate a full blown flogging, but simply poses with the rigging net, having first dressed in the flimsy, tight, Royale, gym shorts and belt as their flogging ritual demanded. Not a wow physique, some Royale models were beefcake body-builders but many were ordinary guys. His footwear is quite interesting, not Royal Navy standard I think. Other models in the Rigging series are bare footed. Perhaps this one jibbed at climbing the ropes in bare feet.

Standing at attention before the rigging, he has all the appearance of a condemned serviceman preparing to meet his fate. His curled fingers certainly suggest some tension (and would attract a rebuke and maybe more from a superior - they should be straight). This detail and his longish hair makes me wonder whether he really was a serving member of the armed forces at the time of the shoot.

Seen from behind in this picture, the outfit seems better balanced and more sexy, although the RN cap looks slightly incongruous. Despite the blurring we get a reasonable impression of a shapely back and bottom

This is a better view. He has climbed onto the ropes and is standing with feet apart and shoulders opened which gives a better impression of his physique. We have jumped to picture No7 here, the intermediate shots probably showed him stepping up. The half-turn position with hips twisted was a favourite Royale Studio device for accentuating body shape in a teasing way.

This is probably my favourite picture in the set, it's such a shame that I don't have a better copy. The arms-raised pose coupled with a slightly upward looking viewpoint seems to magically produce a much better balance to the sailor's physique. His shorts and cap seem smaller and more in proportion. In fact the shorts seem to have almost disappeared, producing a most alluring sight to any would-be spanker. Imagine being the photographer who watched and directed the model as he took up these positions! I wonder what 9 and 10 showed, but we're missing them!

In the frontal position the sailor looks up at his wrists almost as though they are tied, perhaps he wishes they were! The old half turn trick and clever lighting brings out an impression of excitement within those groaning shorts. They seem to have a short fly and button close like the old style rugby shorts, I'd have liked to have seen a better view - button open even - and with the belt removed. 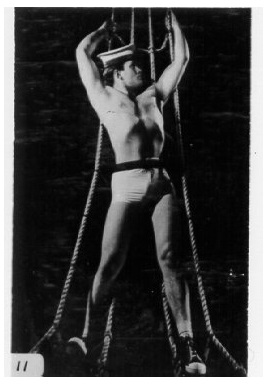 This is the thumbnail version of the same picture. It's the only image in this set which comes to us in both sizes. The difference in image quality is very obvious and for that reason the big version is usually the only one that's ever posted from this set, but I think it works much seen better alongside the others. The thumbnails have the benefit of numbering which enables us to visualise the progression of what must have been a very sexy shoot.

The sailor gazes down at his incriminating bulge. Even if it's mostly padding, it must have felt sexy, particularly with an audience watching closely and possibly the photographer's fingers making adjustments down below.

Since publishing this post I have discovered the identity of the model in this series, it's Alan Adair, a name that's new to me. This discovery is described in the next article in the Rigging series.

Although I refer to the photos in Royale Studio 01 as 'The Rigging Series', it actually brings together fragments from several different series which happen to feature the Royale rigging prop. The set in this article is the nearest we get to a complete series - 6 out of a minimum of 12 images. We don't know if 12 is the last picture in this set, but I have seen an example of a 12 image Royale thumbnail sheet. We can speculate about what might have followed, but the 'phantom snipper' (see footnote below) must have had the full set and it's reasonable to suppose that those which have survived were probably the best of the bunch.

Continued in Royale Studio 01d (link pending, but see below for other articles)

This completely new article has been inserted into the original mitchmen Royale series (2010) which is currently being extensively revised and extended (July 2021) and as an adjunct to that I am gradually creating an archive housing my entire collection of Royale images. There is now (Oct 2021) a 4th post in the Rigging Series, 'Sailors in the Rigging 01d' and I have provided a link to the latest updated 'Rigging' archive in that post.
To see which articles have been revised to date, please check the 'Come and Get It!' post
You can access them all (old and new) by clicking on the 'GIU/Royale' label at the foot of this post

Read the new series of Royale Studio articles at mitchmen from the start:-
Royale 1 - Sailors Flogged in the Rigging

The Royale Open Archive link will appear in the next post

A Note from the mitchmen Curator

All but one of this vintage, military 'Sailor in the Rigging' set are 'thumbnails' from a Royale Studio catalogue sheet. They seem to have been literally cut out from the original paper sheet with scissors - but not very carefully. As a result none of these images were square and they had all sorts of odd borders with splinters or strips of the white surround included on some of the sides but not all. Visually the effect was quite confusing and scruffy so I have mounted them all on a plain white surround which makes it easier to look at them. I haven't changed them in any other way, no cropping, no straightening. If you look carefully you can see the original boundaries.

These thumbnails are also quite small, so to aid appreciation, I have blown some of them up here using the blogger re-sizing function, it produces blurry results, but better than my primitive, photo manipulation skills. The others are all in original size. You can view them all in the original sizing by clicking on the image or retrieving them from the archive (link in next article).