Bizarre Punishments No 7 - The Sequel 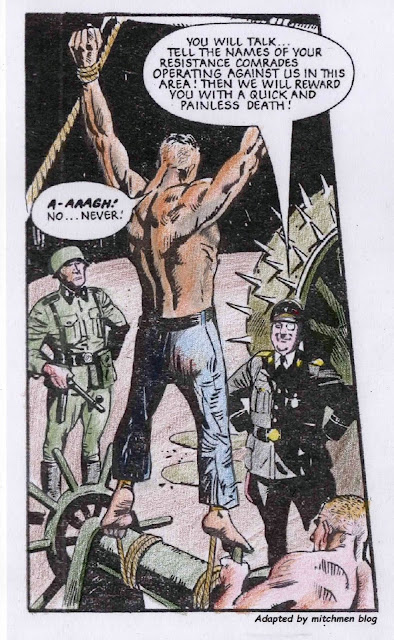 When I find an image I particularly like in my War Comics meanderings, it usually makes me wonder - what happened next? These images are quite racy in their own way but were constrained by the young target audience and publishing controls, so bare tops are about as daring as it ever gets. I like to imagine scenes going further.

This image was featured in Bizarre Punishments No 7 in the original black and white form and my starting point for 'improvement' was to apply some colour. This brings out the captive's impressive muscular frame and closely cropped hair, that neck is so sexy! I've also used colour to shape his bottom and hint at what else he may have suffered in this captivity. 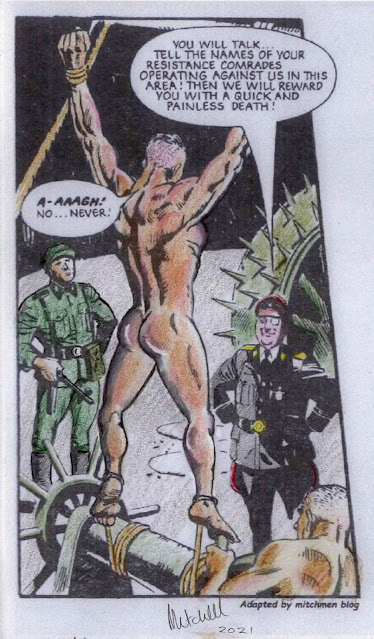 Stripping off those tattered trousers reveals a very cute pair of buns. No wonder his captor looks so smug and attentive! I can't help thinking either that the guard's strategically-positioned gun might be code for another weapon inside his pants, but then, I'm just a pervert.

Uncovering the captive's leg joints and colouring the machinery also exposed some very odd perspectives. The distortions help to condense the image in the original and the crazy angles help the drama too but they make it difficult to develop a more fetishistic view of the scene. I've started on a more realistic re-creation of it. Watch this space for that! 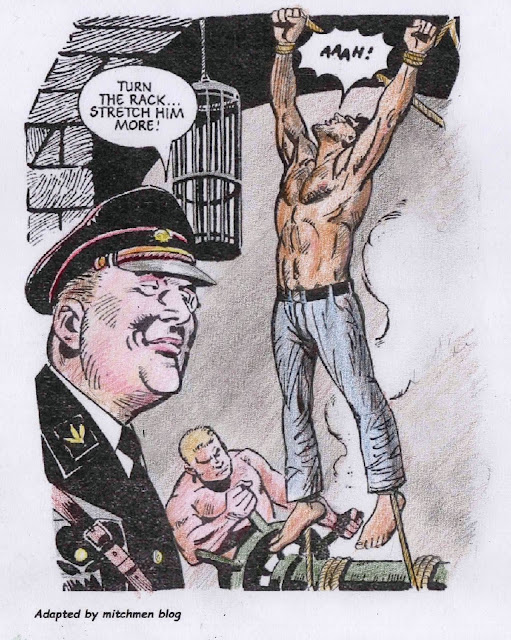 The companion picture is probably better as a composition but not quite as sexy in the detail. You can imagine the crafty Officer contemplating what delights await him when de-bagging time arrives. The torturer is a rather good cameo in both images, exuding muscular strength and limited imagination. 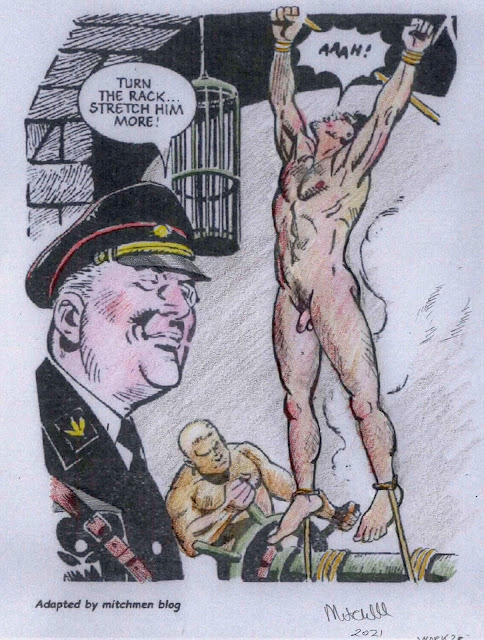 In the naked variant I decided to go for realism in the cock department. You can tell the Officer is teased by his victim's still-hidden potential and the torturer seems to think more pain will help.
The limbs were easier to work with in this variant but the ropes and the arms don't stand up to close examination. I'm working on a Desert Rats variant to go on my mitchmen gallery at Deviant Art gallery, with skimpy rolled-up shorts providing the sexy modesty required there.
It's the basis of a further sequel 'The Desert Rats Story'
Posted by Mitchell at 09:30

This manip is brilliant! The WAS a guy who was going to do this on the Aquadude site, but he only ever did one pic. I'd love to see a LOT of these from comics that I probably saw as a child. There seemed to be a lot of topless torture in those days...sigh!