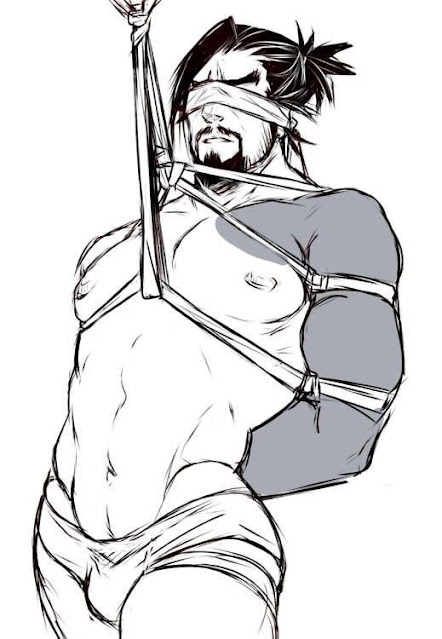 This sketch continues the suspension theme of my last post but the frontal harness arrangement here is quite different and seems very original. It forces the captive's body to arch forward sexily. That stance is accentuated by the dipping waistline of his briefs which have a pleasing bulge.

The shaded arm in these images is suggestive of the 'Winter Soldier' character much in vogue right now. I can't say I care for his long hair in the movies (in contradiction to the follies of my own youth!). However this distinctly Asian, spiky styling passes muster and together with the neatly trimmed beard gives the captive a gritty substance worthy of the torments he faces. 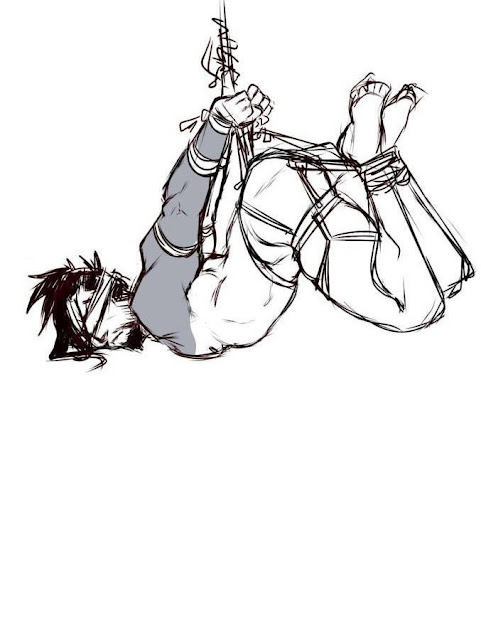 By contrast this ass-up suspension is much less dignified and probably very uncomfortable. The blindfold prevents him from seeing, leaving him to imagine a precipitous drop to the floor. He's lost his loin covering here but the pose preserves his modesty (for what that's worth in this sort of situation!)  The strapping used to restrain him is much more complicated and doesn't quite match the pleasing simplicity of the first image or the one below. 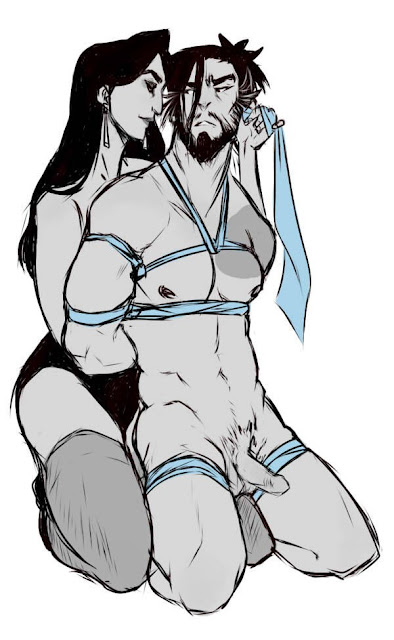 I'm torn on this image which seems to be part of the same series. The bondage element is deliciously understated and the figure knelt behind him (who has presumably just removed his blindfold) ratchets up an air of hovering undefined menace. Regulars will know I'm not averse to 'fem dom' situations at mitchmen blog, however the femininity of this captor and her close proximity to him is a big turn-off for me. He doesn't look too pleased about it either! In the end though, I thought that element was outweighed by the bondage appeal and his characterful (apprehensive) face, now finally revealed.

I have these pictures attributed to 'Chop' but I've no idea who that is but the drawing style is quite accomplished and vaguely familiar, so I feel I ought to!  I'd welcome illumination from anyone more knowledgeable than me (via the comments facility).

Apr 13th - We have a character ID now - thanks to imperiusims! See comments below. But who is the artist?