The Art of Amalaric, Part 4a - The Ritual Of Manly Undress, Stages 1-7

Each step takes the unfortunate further down the rocky road to total nudity and restraint, each step signifies control being surrendered and identity being eroded and for some it will be the last time they will ever wear clothes of their own choosing. I have previously tagged this well-ordered process as 'Amalaric's Stages of Disrobement' which is perhaps too pretentious, but it does have a ritualistic significance which his devoted followers can recognise and look forward to enjoying it's gradual unfolding.

However the selection and numbering of the 'Stages' here is entirely my own invention based on study of his imagery. The Stages do not need to be rigidly followed and are jumped, merged or interleaved in different scenarios.

White Tee-shirt and blue jeans is the preferred 'going away outfit' for detained men, being masculine and neutral. Sloppy dressing, like not tucking in the shirt, is liable to attract gratuitous punishment when the time comes, so Todd's worried look here is well founded

Image from Todd Sanders at Aquadude (see Part 3 for link) 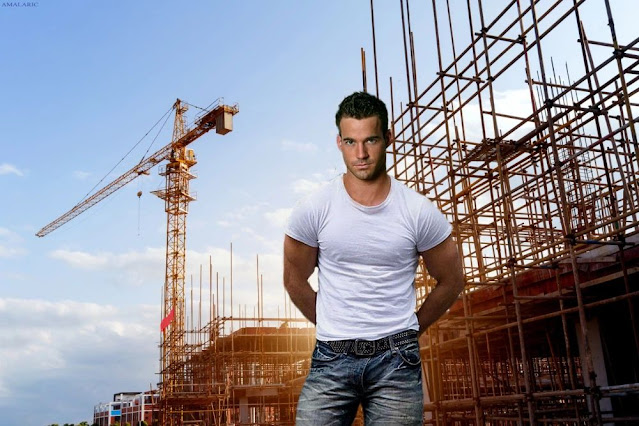 Many who are summoned seem to instinctively know that this is the preferred mode of dress (see also Ryan, farm worker , Todd Sanders, unemployed). A background in manual work is often an indicator of physical fitness (notice the bicep effect) and of a pleasant, malleable, personality. A good start for the new relationship and it's worth pausing to enjoy the old view before work begins.

A number of the images in this post are taken from the '1001 Nights' series posted at Aquadude Bunker. The title is inspired of course by the ancient Middle Eastern tale of Scheherazade and her attempts to avoid execution by telling an endless series of tales to her cruel husband. Amalaric's series explores male captivity and domination themes and the story formats are as varied as the original, ranging from a single image with a couple of lines of text to ones with multiple images illustrating short stories or simply connected by a common theme. You'll get a sense of the variety as you read this article. Only one is spread across multiple 'Nights', an exception to be covered in a future post. However they do sometimes revisit previous ideas or fill out larger works (like MOSLA). Additional continuity is provided by the images which are mostly in the artist's 'simple', focussed style (like that above) and are often set in an atmospheric, walled space which appears in Stage 3 and other examples further on in this post. It's the quality of those images and the tantalising story ideas that make you want read more of them, just like Scheherazade's Sultan. At the time of writing the total 'Nights' are approaching No 300. More background here 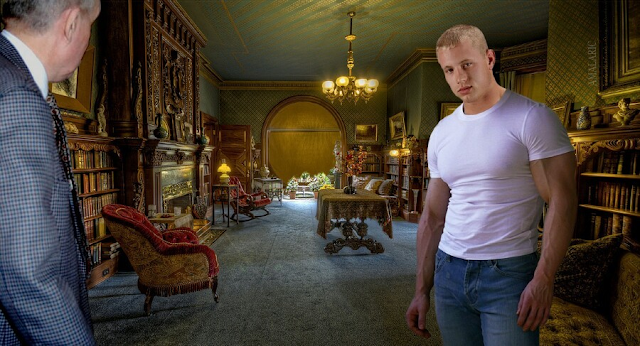 I have a soft spot for youthful chunkiness and a well filled T-shirt, but for Amalaric it's an unusual variation on the standard kit and build illustrated just above. Ty owes this man a very large sum of money for his Casino gambling debts and his sporting credentials and fitness will not shield him from being awed and intimidated by this older, powerful man. They will however give him a way to pay off his debts and keep his place on the team – subject to a few sacrifices of course.

Ryan provides another perfect Tee and Jeans example in Part 3 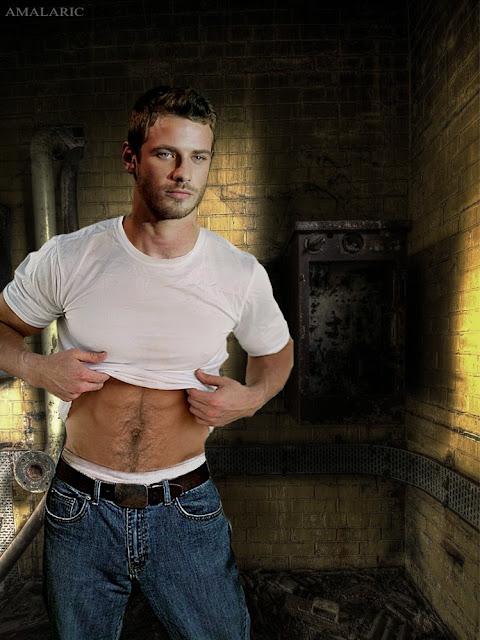 Obedience to this instruction is the first tangible sign of the inductee's willingness to submit to orders and eventually to discipline and it usually requires lengthy preparation and groundwork. Pete Devereaux's modest lift, revealing two thirds of his six-pack might indicate modesty, reluctance or both, requiring special care on the part of the Invigilator. In fact, at this point in his story, Devereaux is being ordered to undress at gun-point, so fear probably enters into the equation too, I guess.

A similar strip at gun-point occurs in 'Rogue Traders' too (see Part 1) and that image vividly illustrates how crude coercion by unskilled invigilators can easily lead to panic and a disorderly sequencing of the Stages.

Ideally the waistband of the man's underwear should become visible at this point but unorthodox presentations are permissible as long as due deference is exhibited - as with 'red shirt' in Rogue Traders and the next example below. 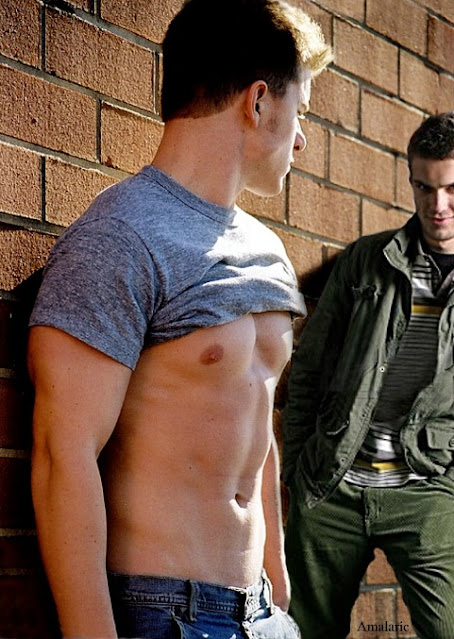 A perfect execution of the Tee-lift, revealing pecs and abdomen, all shaved. This sight was not intended for the eyes of lustful men, but Mark in this vignette is being blackmailed over his use of recreational drugs and feels he has no choice in the matter. He's clearly looking for clues as to what else might be coming his way, while his blackmailer is calculating how far he can push him.

Construction worker Dave McGuinness in '24 Hours' also reveals nearly all of his torso at this Stage (see Part 3), it's an early sign of his naivety and readiness to submit to authority.

I'm reserving some other, particularly good examples of this Stage for future parts of this series.

These last two images illustrate an intriguing approach to cropping with one image featuring lots of grubby-looking space to one side and the other very tightly cropped, as though the blackmailer is try to hide from us.

Strip Off The Shirt 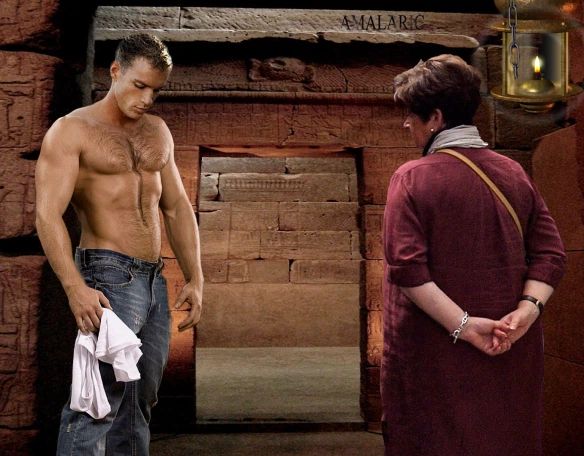 In this unusual image, the invigilator of the Stages is a woman, the handyman's employer in fact (although this '1001 Nights' setting is also suggestive of a prisoner presenting himself to a member of the parole board). Either way he demonstrates admirable deference and a super physique which will serve his mentors well in the future. He isn't showing any underwear waistband, perhaps out of respect to the female Invigilator but also raising the suspicion that he isn't wearing anything underneath, which is bound to attract unwelcome interest in this world. 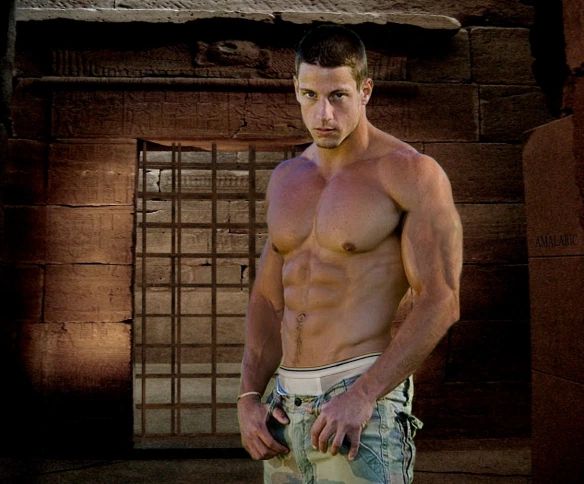 This is the usual dress mode for conducting Slave Trading, but Tee-shirt removal is optional for entrapment scenarios where the target might be spooked by it. Retaining the cover of his T-shirt sometimes makes later Stages and capture easier to achieve. 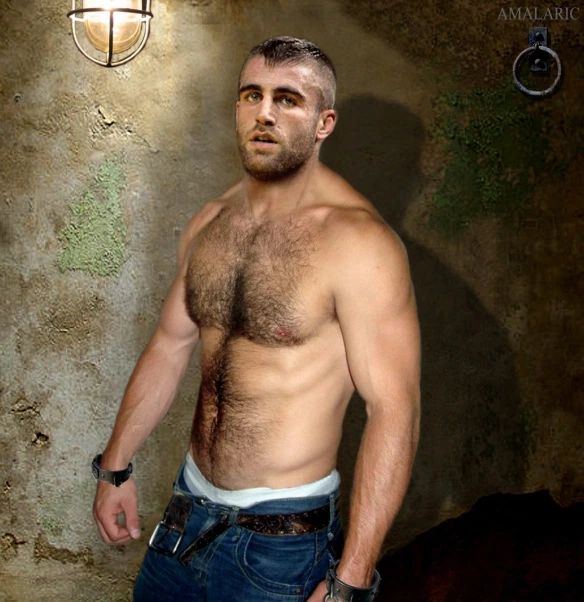 This is hugely symbolic step (arguably two steps). At this Stage the Inductee becomes aware that his more intimate areas are part of the 'game' and liable to come under scrutiny. You sense this prisoner's alarm as he considers the prospect.

Men who favour a 'comfort fit' now become exposed to the relentless drag of gravity. The sole description provided for this image is “It was only a matter of time”.

That doesn't necessarily refer only to the descent of his jeans, of course. 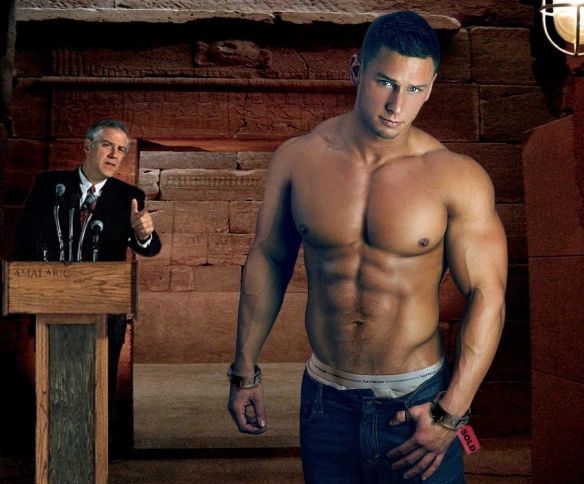 Men in captivity will often have their belts taken away as a safety precaution.

Appearing in sagging jeans does not usually detract from sales appeal. Shackles can be dispensed with if the buck is pre-occupied with keeping his pants up and that allows him to project a 'safe' demeanour that appeals to those who like their men pre-prepared. 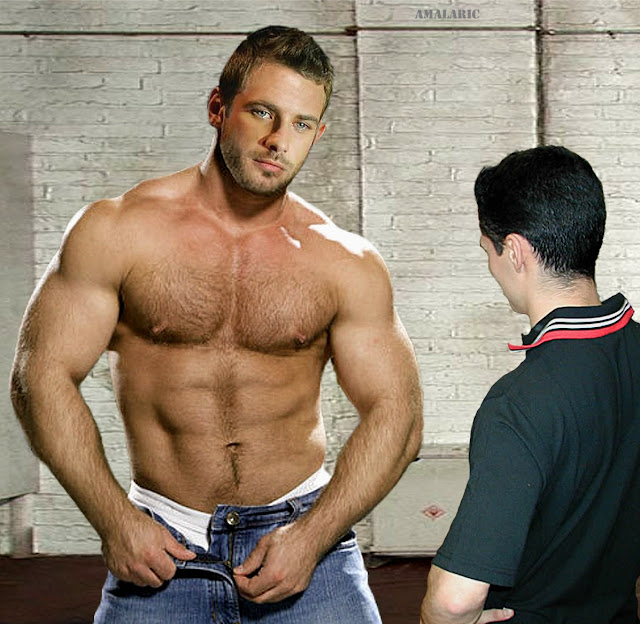 This step removes the last barrier to descent and reveals more of the snare's underwear, lower down. Devereaux's resigned expression and refusal to look his invigilator in the eye expresses his humiliation and dread at being forced to do this as powerfully as any words. Predictably, the invigilator's attention is elsewhere. 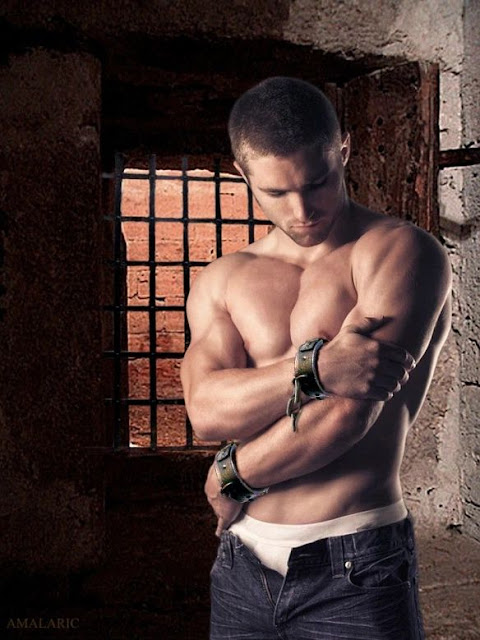 Once the zip has been lowered, the wearer is more exposed than ever to the vicissitudes of gravity and if left to his own devices is faced with the dilemma of constant correction or doing it up again and potentially attracting punishment for it. This desirable, young man has been unzipped by his captors after being cast into a Mexican jail for defacing an ancient pyramid. He's a vulnerable captive in an environment with uncertainties and dangers comparable with those of the Middle East (see Part1).

And now he hears boots approaching outside. 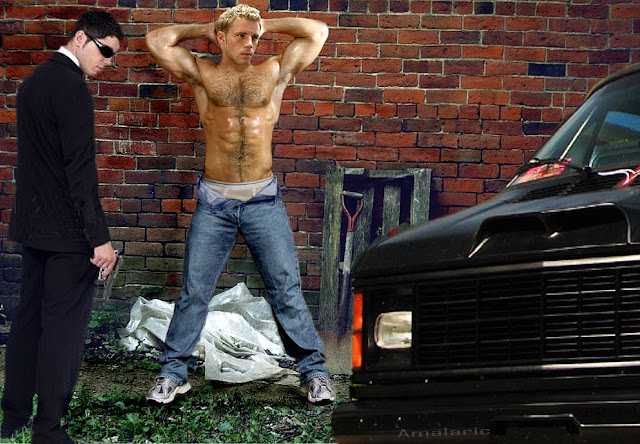 This Picture shows the classic Amalaric strip step, the fly-spread, and it's perfectly presented. The fly-spread is more emphatic than just undoing the zip, the two halves are peeled wide open to provide a welcoming glimpse of centre panel without causing the jeans to drop off the hips.

This neatly stylised arrangement doesn't come naturally to most men but Jim's lucky enough to have been shown how to do it by the MOSLA agent (called Bobby!) who's been stalking him for weeks and is about to bundle him into his van. In fact the agent actually did the spread for him if I'm honest. Having a complete stranger do that to you in your own backyard must feel weird, but Jim's feeling a bit strange anyway at the moment, unable to do very much at all except obey the orders he's given.

Put it down to that free beer he was given (sorry I don't know the stockist). 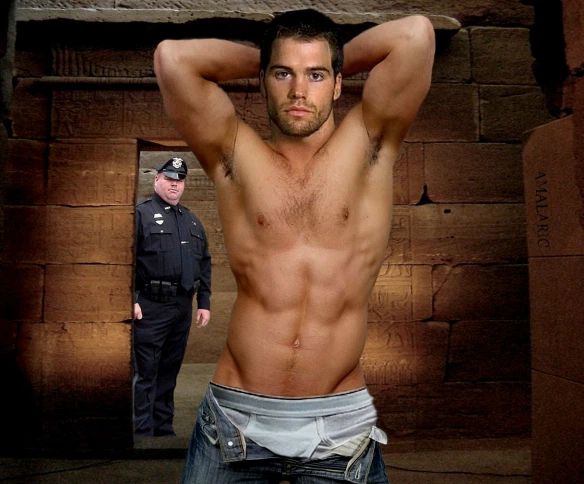 This is what happens when a man is left to do it for himself, he's allowed one side to slip down. It's a charming, manly clumsiness to some and to be fair, it's an understandable slip when you're in prison and a Guard has just told you to strip for no obvious reason (well, no obvious legitimate reason).

Still, when he's presenting a luscious body like this to a Guard with little obvious refinement, the defect will probably pass without comment.

More of this buck stripping at the link below. 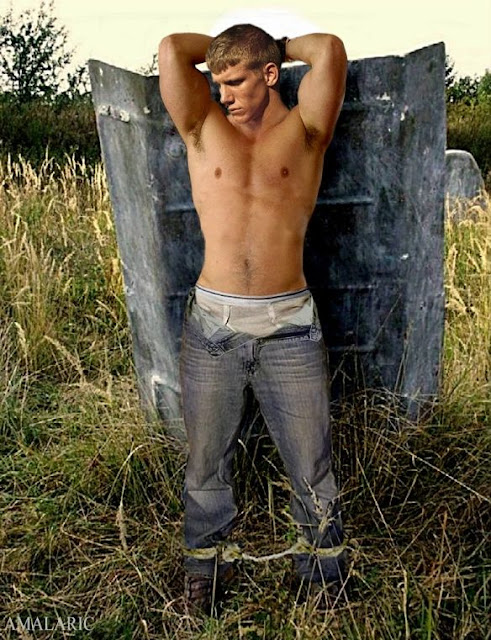 Ryan returns with his touchable physique incorporated into a sculptural installation and his jeans demonstrating extreme, gravity-defying fly-spread. Of course this is Bobby's handiwork and he's done it many times before in his fantasies as we saw in Part 3. Ryan has no suspicion yet that Bobby's artistry also has darker outlets, although the hobbling of his legs and this target-like pose might just be a clue.


Read this series from Part 1