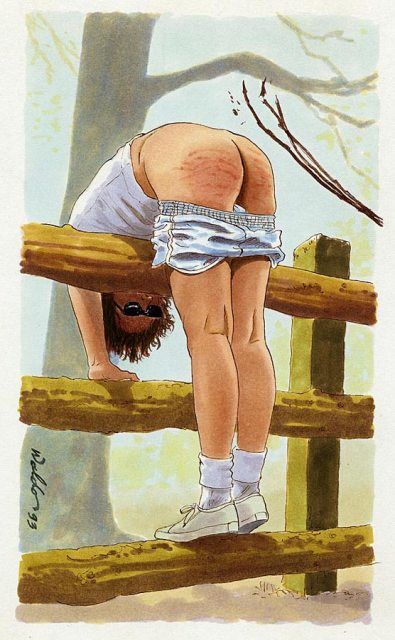 Waldo - Fenced
This French artist's work is focussed on spanking, drawn and painted with fresh colours in a comic book style with a slightly retro-feel not unlike that used by Nikolaas for his rather darker subject matter. The clothing likewise reflects it's time but I like the traditional shorts suggesting a jogger on his morning run taking a short cut where he shouldn't! 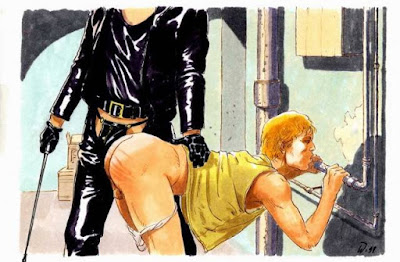 If you enlarge this image you will see that this man's face has a classical quality like the statues of Greek and Roman antiquity and it shares the rather lifeless eyes that often characterise those works. You don't get a strong sense of personality or that this artist admires men or sees them as powerful, sensual or sexual objects. I'd be a bit worried about what's going to happen to the plumbing if the spanker really gets going! 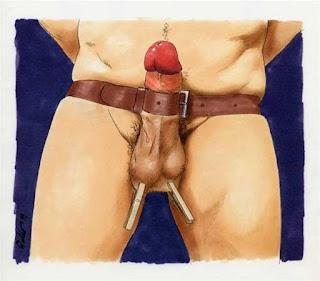 Waldo - Belt Loop
This is a very simple image but captures rather skillfully the curve of the belt as it circles round the the subject's body and cock. The indentations produced in both areas show a tight, restraining fit. I'm not sure this arrangement is achieveable with a conventional belt design though!
.
The majority of this artist's work features female participants as both tops and bottoms. If you are not averse to such content you will find plenty of it very easily with search engines.

For more articles in this series click on the A-Z label below or search for specific artists using the index page or search boxes (top right)
Posted by Mitchell at 05:45