Tagame is a modern giant of the fetish genre, he is both provocative and prolific. For the art reviewer, the amount of material is massive, his comic book stories are often huge works running into hundreds of pages with perhaps 6 illustrations per page. I cannot hope to do justice to it all, just give a flavour of that which I admire about him. 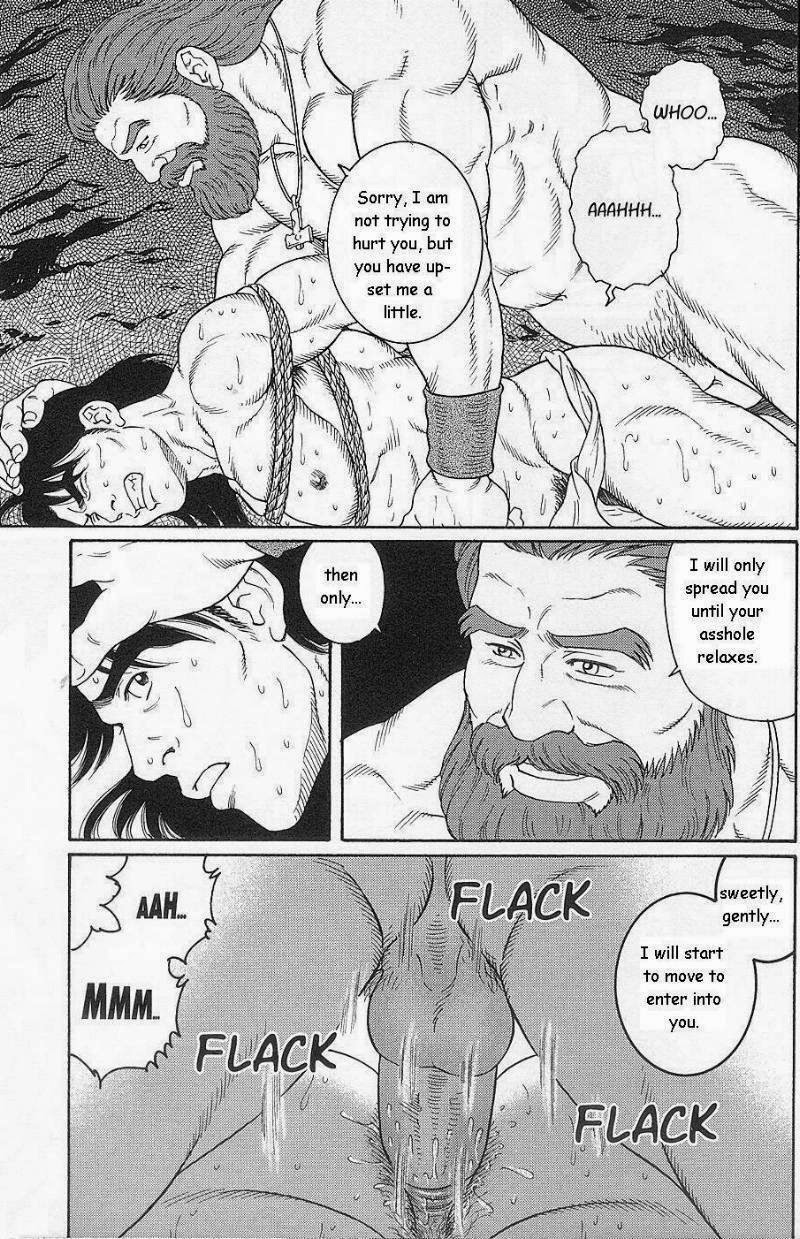 The Viking and The Ogre (from Oeyama-Kitan)

Anyone wishing to get to know Tagame's work faces a few obstacles. His stories are written in Japanese and typically contain page after page of scene-setting dialogue which is baffling for the average Westerner. English (and other) translations do exist (see above) but they are often awkward, peppered with strange transatlantic and colloquial expressions and generally lacking the style and subtlety to bring out the true flavours of the original Japanese text. The randomly selected example above illustrates the gulf in language. (Remember to read the pictures from right to left on each line). This Tagame is unexpectedly romantic, but the image shows his graphic skills nicely, there's an intriguing touch of Yaoi style about it too. 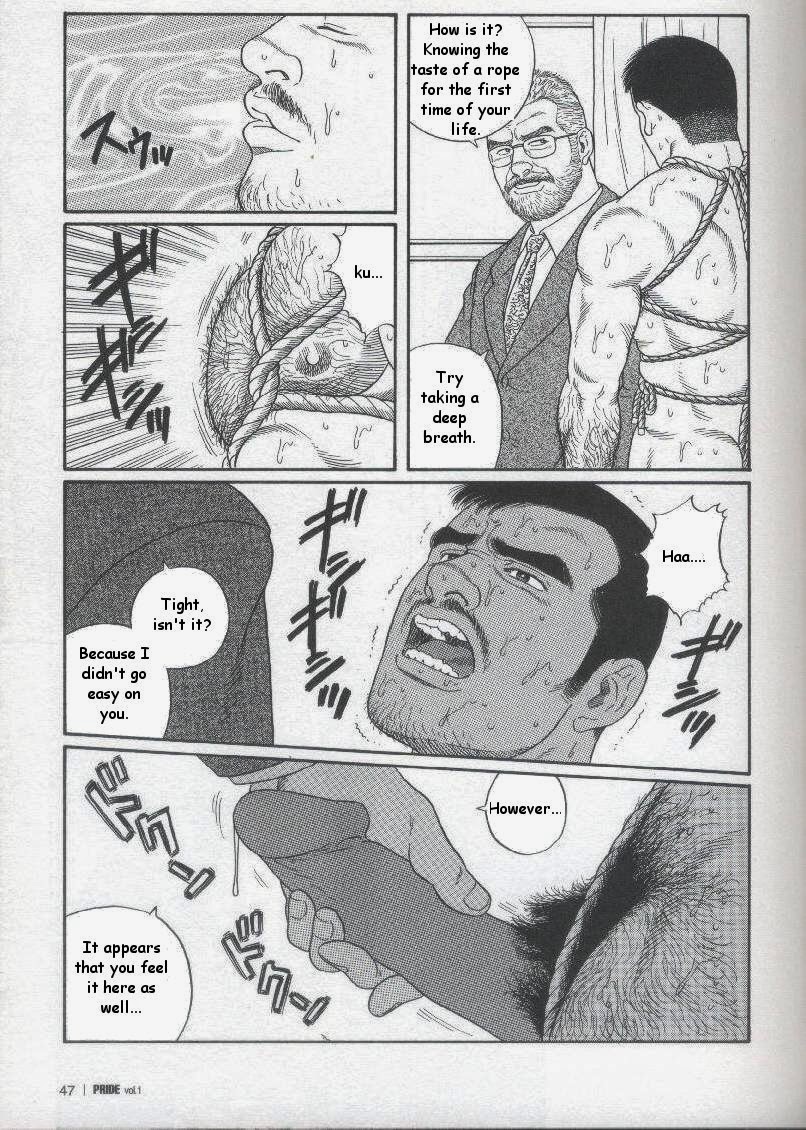 The sheer scale of his works coupled with the language issues often leads to dismemberment of the stories and circulation of 'best bits' (bleeding chunks, as they say in the classical music field) without any context. Despite these issues, it's worth seeking complete translations out as this allows some context to be applied to the more spectacular images and can reveal otherwise 'hidden' gems in the scene setting, like this episode from 'Pride', where a student discovers that the tight, rope, body harness, (which he has been told to wear under his clothing by his mentor as an initiation test), is not mere decoration, it subsequently hampers everything he does during the day - threatening to expose his secret to his friends. Sadly it seems that the sound-effects defy translation – a bit of creaking rope perhaps? I admire the skilfully drawn faces in these frames. 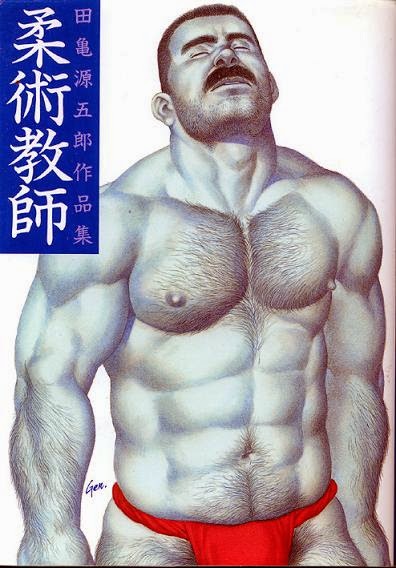 Many of Tagame's principal characters are beguilingly western in appearance, often with chunky builds and prominent black eyebrows and moustache's, they almost look like the stereotypical Latin American macho male. However there is no mistaking the Japanese settings and clothing and his work is full of Japanese cultural references, such as the loin cloth (fundoshi) in the picture above, much of whose cultural (and erotic) significance is probably lost on Westerners. Many of Tagame's coloured 'stand alone' images like this actually belong with specific stories and depict the characters or incidents in a more polished form than is possible within the comic book style. 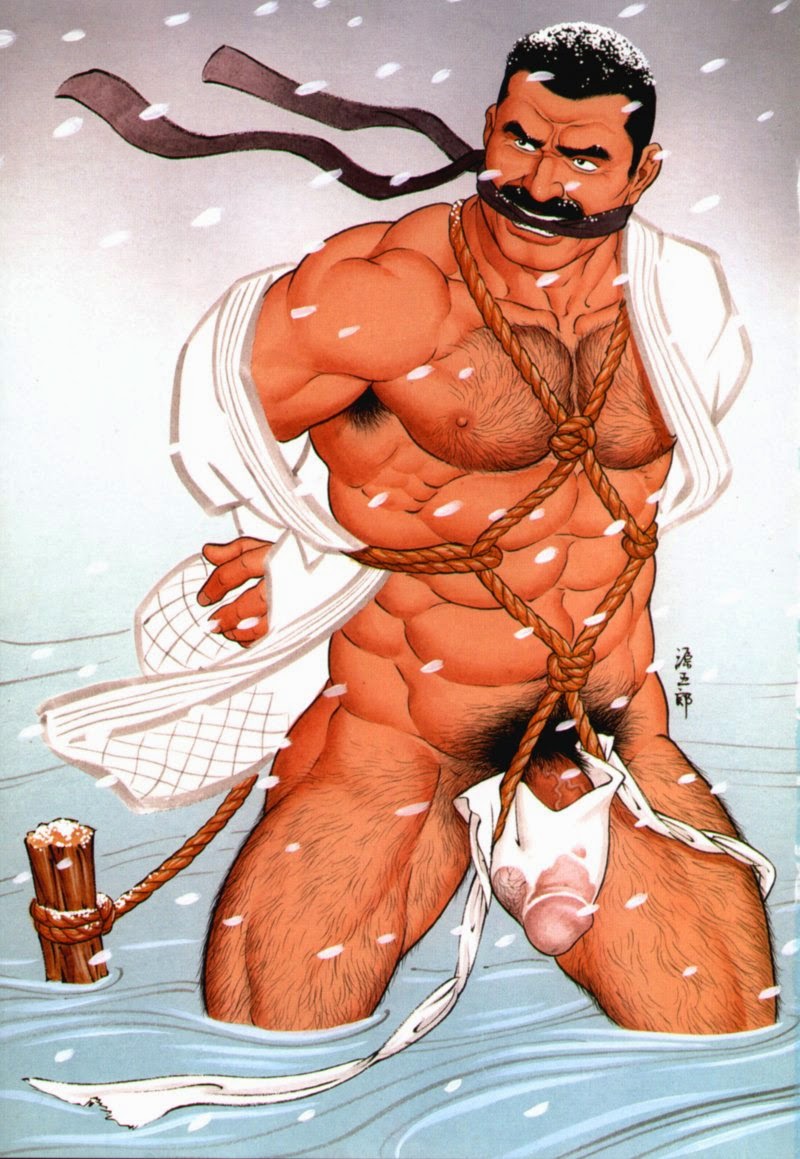 I presume this imagery has it's roots in Japanese lore or literature and I have an idea that this is a punishment normally reserved for servants. However, I lack the knowledge to fully understand the allusion. The picture comes from the volume, 'Jujitsu Kyoshi', a story of an martial arts instructor who offends against family morality and is punished. This scene does not appear in the story itself, but it could do and works as an embellishment for the reader to fantasise about. 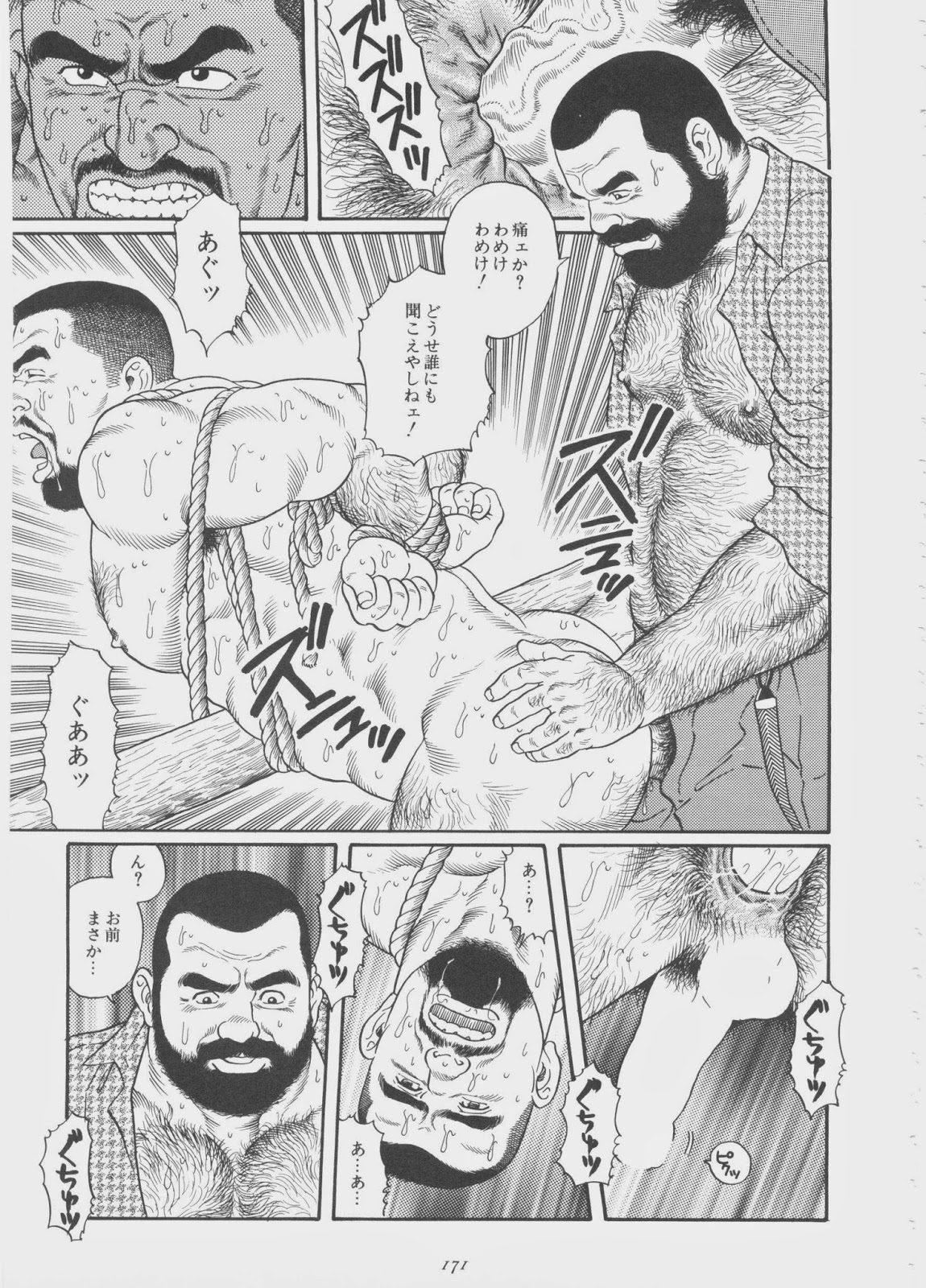 Scene from Kodama (Cabin in the Woods)

The final obstacle to mention, well it's more of an irritation really, is the Japanese censorship code which obscures sexual detail to a greater or lesser extent. I've tried to avoid including them in this article as far as possible. The example above (bottom right frame) at least gives the reader the option of providing his own! Sometimes a speech bubble blocks the offending area completely. As you would expect the artists are skilled at circumventing the restrictions and if you look top right, you will see a very explicit image indeed which has got through in disguised form.

Kodama (which this page comes from) features a gangster on the run. After an initial confrontation, his life is saved by the owner of the Cabin who then offers him a refuge – of sorts! This raunchy scene from the story is actually preceded by a toe-curling humiliation and in the next article I will look at Tagame's challenging content in more detail.

For previous articles in this 'mitchmen' series click on the A-Z label below
Posted by Mitchell at 10:36