The Letter 'T' in my survey of fetish artists presents us with two long lasting giants of the genre - Tom of Finland of course, plus Tagame. Then there is Teddy, a shooting star who flared briefly and then disappeared. The truly British character of Tam's work has special appeal to me and introduces a fetish that I don't think I have covered before - punching and fighting.
The 'others' category includes the notable veteran artist, Titus.

For starters I offer an image exploring the idea of masculine power associated with cowboys. 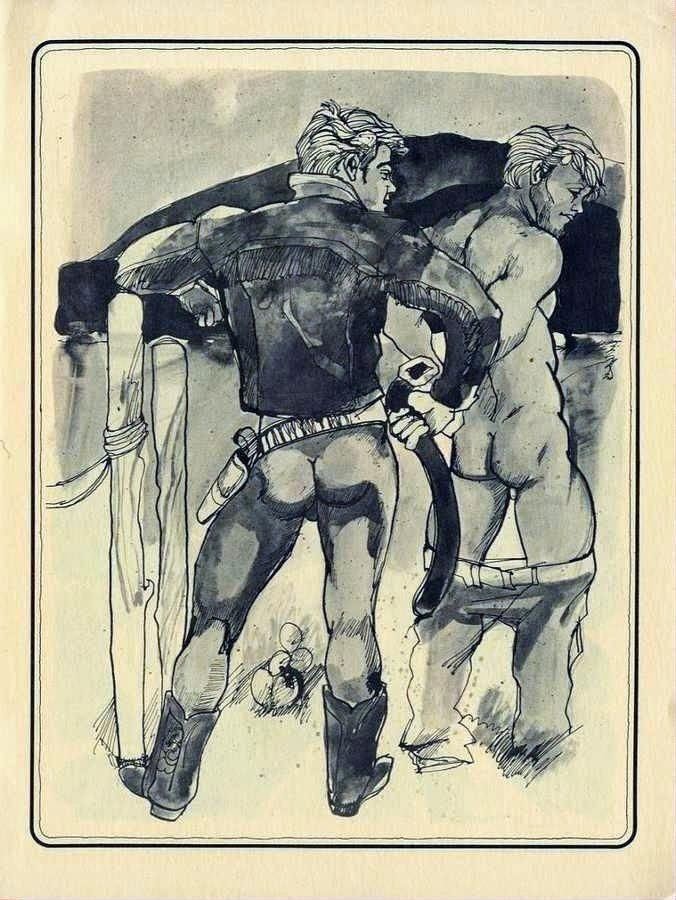 However, it's the fetish elements of this picture that are most fascinating. The dangling belt and bare bottom unmistakeably signals an intention to spank. That was OK back then. Spanking was a normal part of growing up and it's application to grown men was considered to be no more than a peccadillo, just not to be spoken of.

Contrast this with the bondage element of the picture. It's not explicitly shown at all, but we all associate cowboys with ropes and lassos, and for those who recognise it, the arms-behind-back pose of the right hand cowboy and the bindings round the post on the opposite side of the picture tell all.

In fact these two innocuous posts tell a very explicit story indeed if you take the trouble to read the code. Their upright rigidity and close proximity speaks for itself. These cowboys are very excited! One post is bound with rope and the other not. That's easy, but did you notice that the bound one is significantly longer - and that the other cowboy is 'leaning' on it? We now know who is going to do what to whom. I confess I'm not sure of the full significance of the dangerous-looking projecting thorn but it's gonna hurt! (Perhaps it already has done and spanking is the result)

Finally consider the odd little cactus plant, which at the base bears a striking resemblance to a scrotum, an impression enhanced by the absence of spikes. A susceptible viewer might also perceive a curving penis disappearing beneath two other plums, note how the delineating thick shadow creates a sense of perspective. The plant itself is strategically positioned directly between the cowboy's legs - manipulation of 3-dimensional distance is a valuable disguising technique in these illicit images and it creates the visual equivalent of a double-entendre, suggesting both the simple joke of sitting on a cactus and something rather more naughty!
Brokeback Mountain was never like this (unfortunately!)

As hidden eroticism goes this is something of a tour-de-force (click on the label below for other examples). I have another image by this artist but it's just an adaptation of one of Lederman's famous 'cowboy in jockstrap images' (another dating clue). That's all I know about him, but he deserves to be rescued from obscurity by this image.
(Information from readers welcome as always).

For other articles in this series click on the A-Z label below.
Posted by Mitchell at 11:15