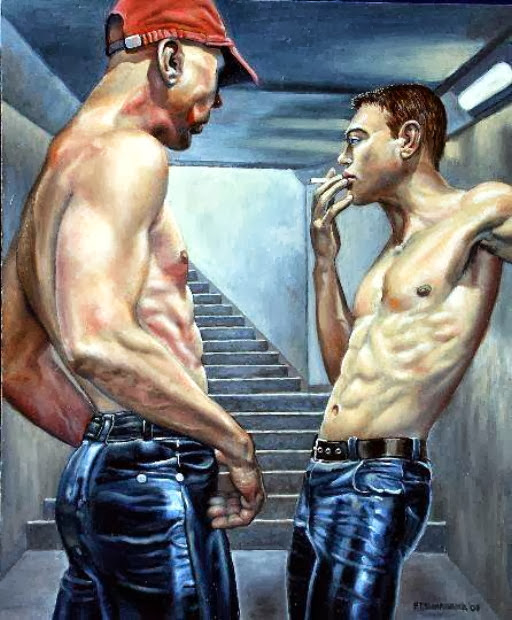 Philip Swarbrick is one of those artists whose work combines erotica with more serious stuff. His subject matter of dangerous-looking, street-wise lads, loitering and having sex in subways and dark alleyways has always been provocative, but it is trickier than ever these days and I've had to leave out some fine pictures, where age appears to be an issue. In his trademark 'back alley' scenes, there's a sense of young men who are hard up, bored by life and lacking purpose. Trying to be older than their years, they don fetish leather and idle away their time in sexual encounters and scamming punters for money out of sight of the 'real' world. Politics aside, the combination of rough-edged unpredictability and youthful bravado also makes for a heady, erotic brew. The urban, concrete jungle settings, cleverly expressed with simple walls and steps are amazingly evocative. 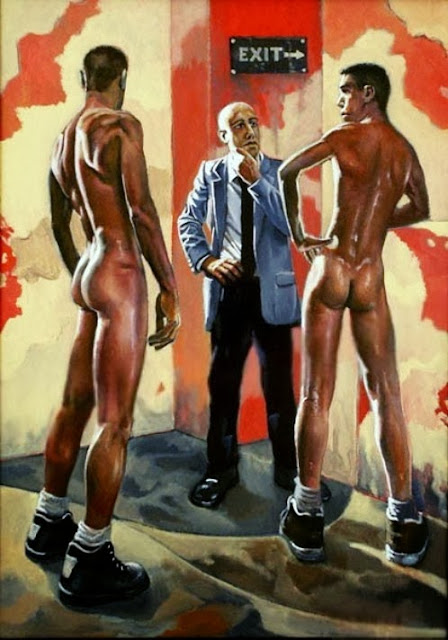 Erotic art rarely touches on the issue of prostitution (except as an excuse for police abuse – see my arrest series). In this image, two gangly, rent boys tower intimidatingly above a prospective client as he makes his choice. But big as they are, the power is his, this is a bordello and they are clearly at his disposal. They have stripped and oiled their bodies to present their youthful muscularity attractively for him, but try to appear indifferent and bored by the painstaking selection process. These young adults are by no means innocent nor weak, but they are trapped and their immature gestures, beautifully captured by Swarbrick, suggest a dislike for the job, perversely coupled with a desire to be chosen and paid. The artist's use of clumpy footwear, accentuates this youthful gaucheness. 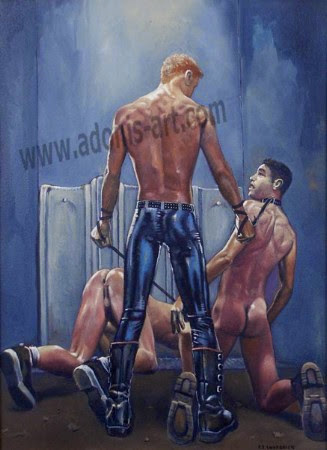 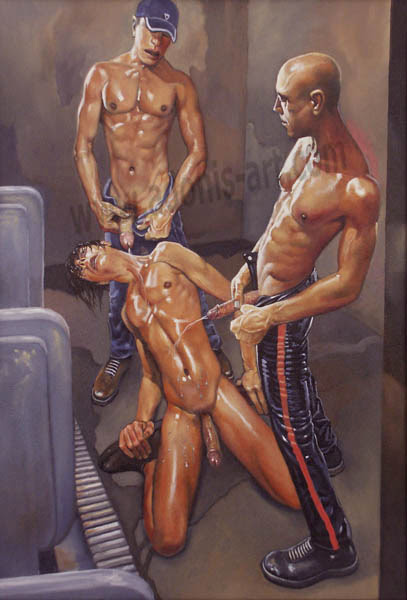 Another urinal scene and two very tough looking men humiliate another by pissing on his naked body. Indeed bodies are the essence of this picture, slender and tightly muscled, gleaming with sweat and urine, the play of light on them is beautifully detailed and highly sensual. The elevated viewpoint, highlights the domination of the sprawling victim and his helpless position trapped between the other two men, he's almost connected to them by their streams. In this key central area, notice how the veins on the hands bring out the masculinity and strength of the attackers. This fetish is rarely expressed in quite this way, usually the 'victim' is eagerly gobbling up the drops that fall, this image is more ambiguous and I rate it highly. Compare it with Roscoe's depiction. 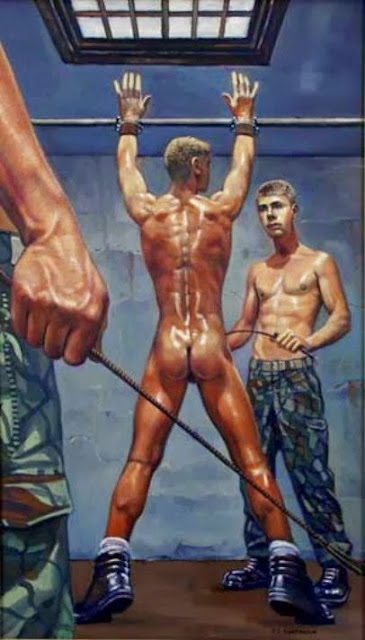 In 'Deep Cut', some sort of military dungeon is the setting for a young recruit's horse-whipping. In fact the title refers to a real life Army brutality scandal. The discipline here looks as though it is to be dished out by an older man – almost out of shot and represented by a fabulously captured arm and hand, gripping a riding crop – and his young assistant who you sense is still learning his trade and not quite sure what side he's on as he addresses the offender. The gleaming boots and neatly belted trousers lend an air of soldierly authenticity and nostalgia enthusiasts may recognise a kinship with one of Royale Studio's most famous punishment scenes.

Swarbrick's depiction of the nature of young men and their relationships with peers and elders is fascinating but also challenging to commonly held beliefs, not unlike the subversion of “Lord of The Flies”. It's not my purpose to analyse this, but I do find his imagery highly original and sexy, not just in technical style but in the treatment of it's fetish content, which seems to capture the psychological moment as well as depicting the physical act .

For more work by him have a look at Adonis Art, there's also a good collection here
For earlier articles in this series, click on the A-Z label below
or search by name in the masthead box.
Posted by Mitchell at 19:38