Sepp of Vienna's work features the rough and sleazy culture of skinheads and bears and yet, paradoxically, his images are highly polished and neat with an air-brushed, shiny-skinned, sensual style that echoes traditional 'glamour' imagery. 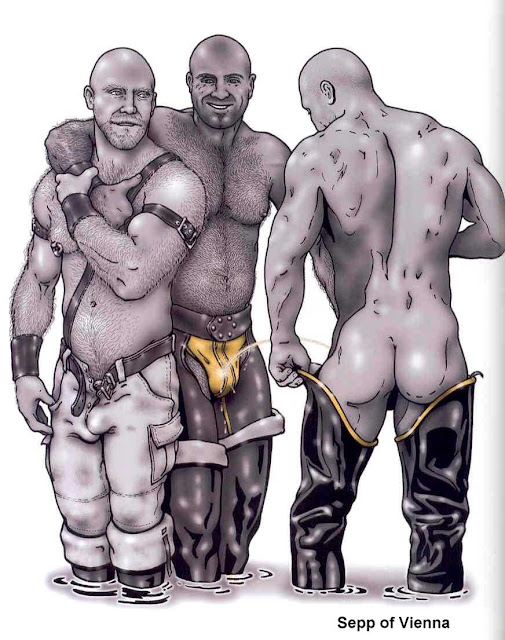 Sepp - Waders
Much of Sepp's work (like this group of 'waders') appears to be formally posed portraiture of fetish boys. There's a parallel here to Tom of Finland's later work, but Sepp's boys clearly don't take themselves as seriously as those leather men and closer inspection reveals these three men are being very naughty indeed. Pause to dwell on the liquid swirling around their waders! We are presented with the ingredients here to imagine a filthy scenario for ourselves, which is very much in the traditions of male eroticism. 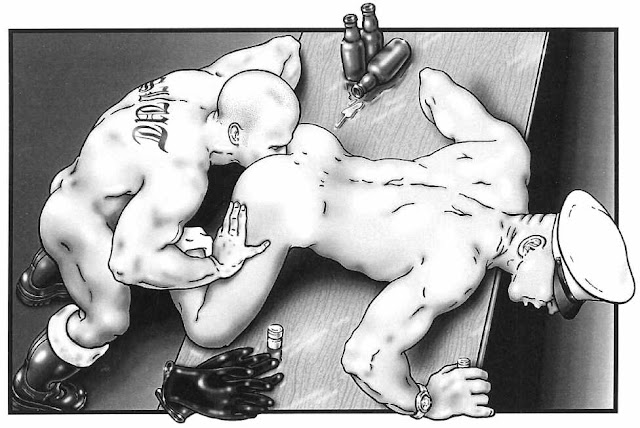 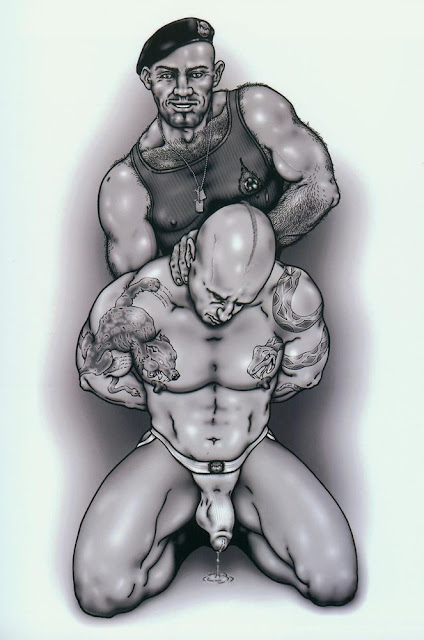 Here we have fetish-a-plenty - uniforms, torn vests, sodden jockstraps and forced submission. It's a memorable image and yet the spark of sexiness is somehow rather fleeting. It somehow lacks life but I can't pin down whether it's the relaxed, smiling, self-conscious pose of the 'M' or the neat, crisp finish that's responsible.

It's interesting that Sepp and Sean should come up next to each other in my A-Z, since they represent opposite extremes in artistic terms. Sepp's images are sensual, immaculately drawn and technically correct and the men he depicts are believable and attractive. Sean's work is much more erratic in quality with lapses into cartoonery and hit and miss perspectives. Sean relies on his subject matter for the erotic impact more than the style. However there's a life and excitement in his work, a spontaneity, that is missing, or perhaps masked in Sepp's. I would happily hang Sepp's drawings on my wall but I would prefer to commune with Sean's pictures in a more private place!

Sepp protects his copyright and his work is scarce on the web. He has a website, Sepp of Vienna, which has a large gallery but the images are very small.

For previous articles in this series, click on the A-Z label below
Posted by Mitchell at 09:33