Sergey is a one hit wonder - at least I'm not aware of any other work by him although the quality of this set suggests there ought to be others (any info on this from my readers?). I have included him because, for me, this little set is a significant fetish work of a fairly extreme type and it's a surprisingly rare example of the 'Cowboy captured by Indians' scenario. The whole series consists of 10 pictures and I have included a selection below with links to the remainder at the appropriate point in the article. 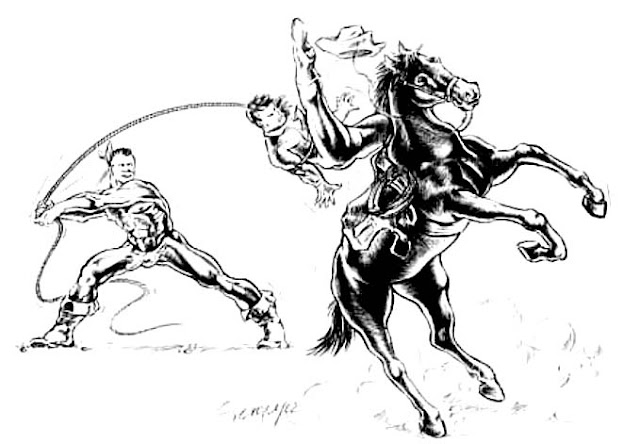 The opening scene shows the dramatic capture of the Cowboy who appears to be wearing revealing skin tight trousers. His rearing horse is nicely drawn but it seems a bit odd for an Indian to use a lassoo. The style conveys a real flavour of Western Comic Strip action, despite a slightly disjointed composition. 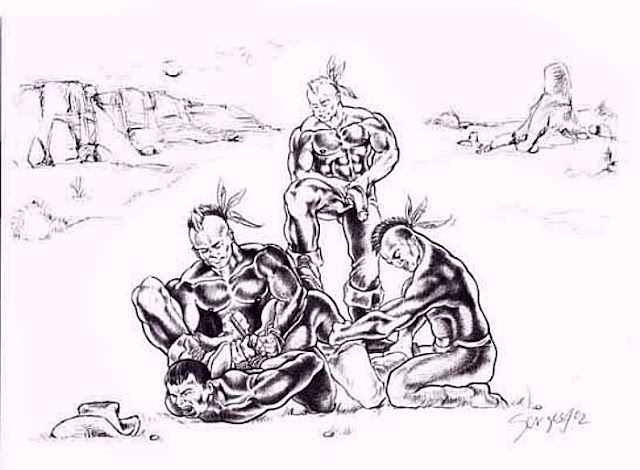 Visually it's a bit confusing and there's some improbable body contortions here. Foot fetishists can just make out the left-hand Indian's boot planted firmly on the Cowboy's shoulder blades, contributing to his anguished expression. Another is using his foot to grind the exposed ass, while clearly contemplating other possibilities which come to pass in the next picture. This boot action and the faces in some of the pictures are reminiscent of Etienne's early work


There appears to be an enhanced contrast applied to these pictures (presumably to clarify the image, post scanning). The result is not subtle but it certainly brings out Sergey's sophisticated technique for highlighting musculature.


The lustful intentions of the trio become clear....
Link to image 3 - 'Used' 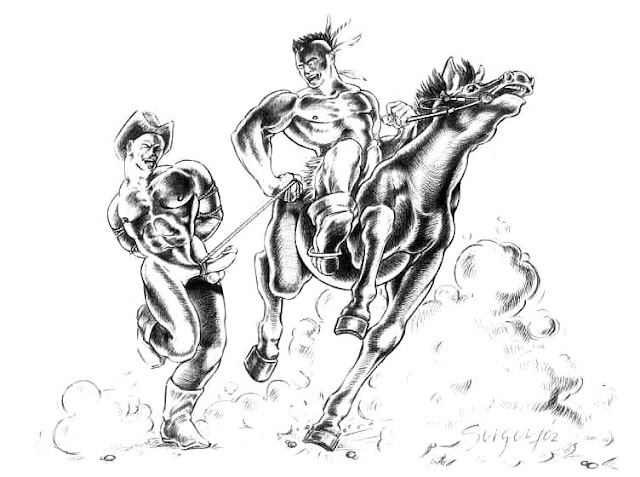 Another fine action image, enhanced by the wildly expressive depiction of the horse, which seems to share the Cowboy's yearning to escape. The compact, V-shaped composition subtly underlines this shared bondage. In between the arms of that 'V' sits the almost demonic, brutal captor/master, who is depicted with immense strength and power (note the foot again). The bodies all shimmer with gleaming sweat, although I suspect the originals may have been more delicately shaded. This effect certainly brings out the brutal tugging of the rope (in case you didn't notice).

Back at camp the cowboy is restrained between posts...
Link to image 5 - 'Tied to Posts'

Battered where it hurts most...
Link to image 6 - 'Beaten'

Tortured with cactus needles (in a graphic piercing scene)  .....
Link to image 7 - 'Pierced'

and is then used for target practice by the bowmen. St Sebastian in a stetson!
Link to image 8 - 'Take Aim'

As you can see, the scan quality of this sequence is rather poor. 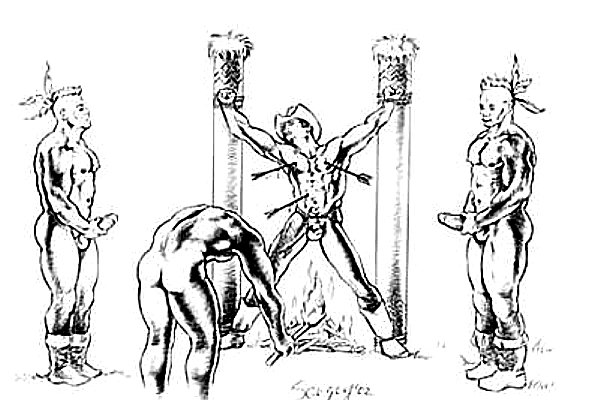 9. Lighting Up
The restraining posts with their zig-zag decoration are inspired by Tom of Finland's 'Jack in the Jungle' (below).  Inevitably, the static restraint method drains the drama somewhat and to be fair, Tom's version is no more successful. 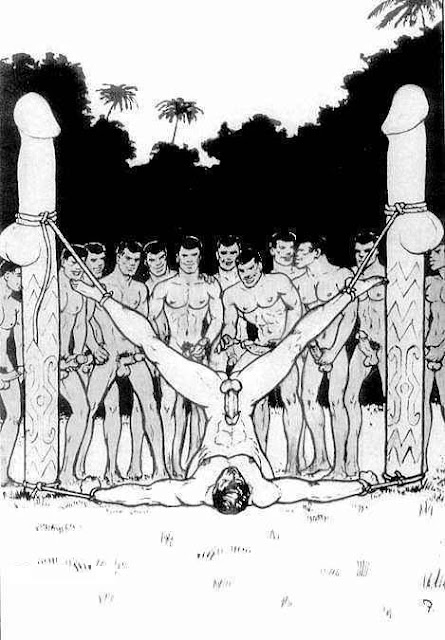 Tom of Finland - Post scene from Jack in the Jungle II 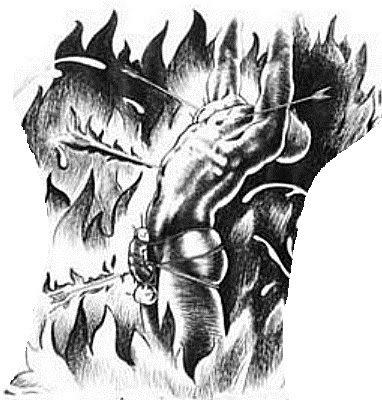 5. Flames
It's interesting how themes sometimes recur within individual letters of my A-Z and this series culminates in another fiery scene to set alongside those of Sean and Saj previously reviewed. Sergey's flames are suggested rather than accurately depicted. In traditional comic book fashion he exaggerates his 'hero in danger' moment by creating an amazing inferno from what was the modest pile of wood in the previous picture. No doubt relief  of some sort is at hand.

I've cropped this last image for publication in this blog, however, the full picture is posted here.

Sergey's pictures are littered with wayward perspectives and imprecise anatomy but he's clearly an artist of some accomplishment and his imagery generates plenty of excitement. It's a shame that no other work by him seems to be available to us.

For previous articles in this series click on the A-Z label below
Posted by Mitchell at 09:00

Hi,
This is an amazing blog ;-)
Could you please tell me where I can find the whole series of these drawings? That would be great!

Thanks for your comment. To find the series use the link 'At the stake' provided in the blog text.