For many years I only knew Sean's work through his gang-bang, comic strips which appeared in the Meatmen collections of the 90's. These youthful sexual romps didn't hit many of my buttons and they wouldn't qualify for this survey either, despite the occasional bondage references. Then I discovered his specialist fetish work (particularly for Bound and Gagged Magazine) and this completely changed my opinion of him as an artist. 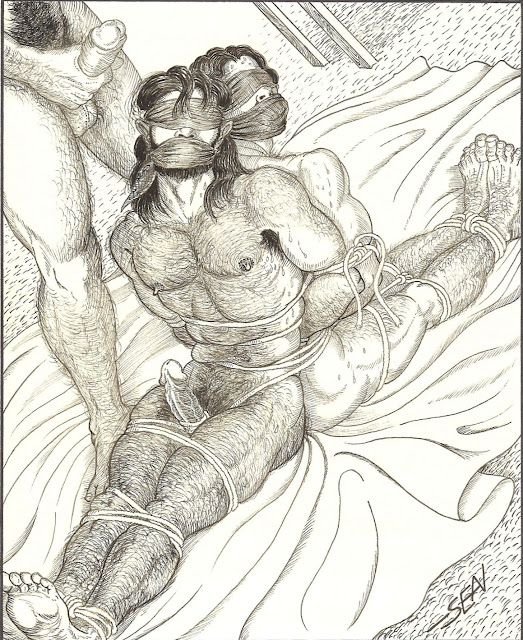 1
I have a great liking for straight forward, simple, bondage imagery and this is an excellent example. Technically, I think it's one of Sean's best pictures, with no obvious flaws in the anatomy or the perspective (which is typically ambitious). This hairy man and his buddy tied up and sweating make a great, sexy subject. Sean has a great feel for the apprehension, fear and excitement which characterise the authentic bondage experience. Sean's detailing is meticulous. The long hair and unshaven, muscular bodies of these characters suggest they are real men, rough and tough. Untamed bikers perhaps, but about to be challenged by a far different, equally uncompromising, approach to manhood. Note the curious, ghostly appearance of the biker's cock. I love too the incongruous, classy flourishes of the scrunched up sheet, which they are sitting on. This picture is full of confident style. 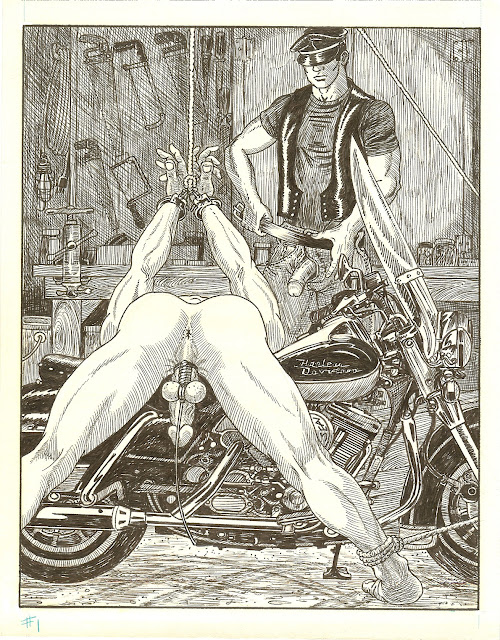 2
This image is quite well known and in a modern context perhaps looks a little tired, maybe too staged, but Sean has worked hard here on the atmospherics and story-telling. Notice how he has shifted the captive to one side, partly out of the frame, so he does not obscure the shiny motorcycle, which is so lovingly detailed you can almost smell the leather and the engine oil. This gives the picture a strange, off-balance appearance but the dual focus suggests the biker is equally interested in both his machine and men's asses.
The man tied over the motorcycle is as well built as the bike, judging by his powerfully-shaped, muscular legs. His shaved undercarriage suggests he is not a novice. Just as well. This unnatural position would probably be described in the manner of the shipping forecast as being 'moderately uncomfortable, becoming increasingly painful'. However, he may not have to wait that long for pain.

The placing of the biker on the far side of the picture is another oddity, it does not immediately suggest dominance, in fact he doesn't look that intimidating but we and the captive can both watch, excited, as slowly and deliberately, he draws his thick belt out through the loops of his jeans, preparatory to addressing those hairless, totally unmarked, virgin-white buttocks and thighs. The wheel-marks in the dirt floor provide a wry commentary on the narrative. 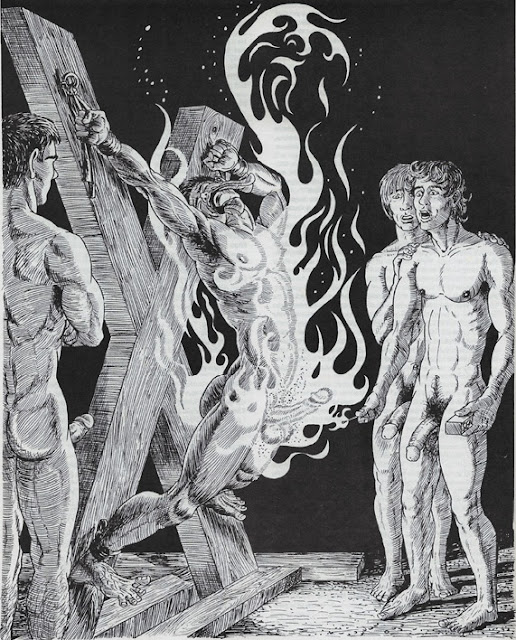 3
This spectacular image is not a 'snuff' picture, but an initiation in which the 'victim' suffers nothing much worse than a severe fright and singed pubes (see footnote*). The arching, agonised body pose of the captive is a great image in it's own right, but the addition of the roaring flames make it truly memorable. You might like to compare this image with Saj's Human Torch . There's a notable similarity in the 'erotic pose', but the treatment of the fire is quite different. Sean emphasises flames rather than burning. The on-lookers in this picture are similar characters to those who populate his sex romps and for me, they seem ill at ease and out of place in this more serious and sinister tale. The text calls for thrilled delight rather than shock and astonishment, but perhaps Sean thought that might create too cruel an image.

*This is an illustration for the story CT Hospitality by 'Rob'. In the story this unwitting initiate, having witnessed some (apparently) cruel punishments is tied up himself and smeared with a 'fire' ointment which, on ignition, flares spectacularly, but briefly. Unknown to him it also forms a protective barrier preventing burning of the skin, but I wouldn't advise anyone to try it at home! 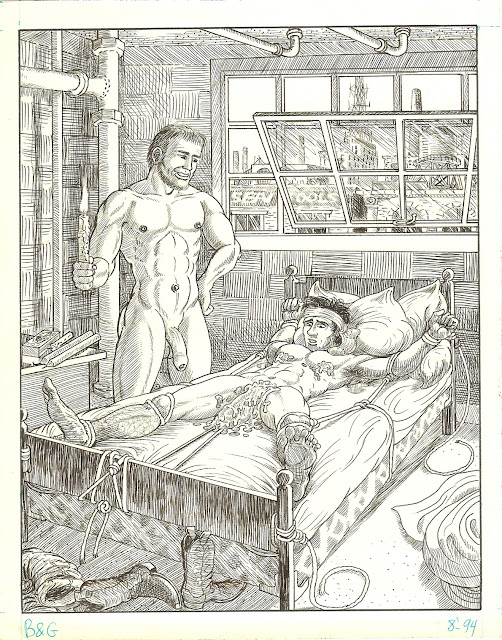 4
This scene looks like an initiation too. The morning after the night before finds a nice-looking, buffed-up cowboy, lassoed and detained for further examination by his mature hook-up. Who'd have thought that this cuddly, bearded gent would have such designs? The image strikes a nice balance between incongruous humour and a nastier edge for those who want to see it (there's a lot more wax left in his assortment of candles)! The curious, industrial-like setting is a world away from bikers and dungeons, but still suitably rough-edged and isolated. Sean's detailing is a delight, even down to the iron brackets on the bed end and the discarded top sheet lying crumpled on the floor. 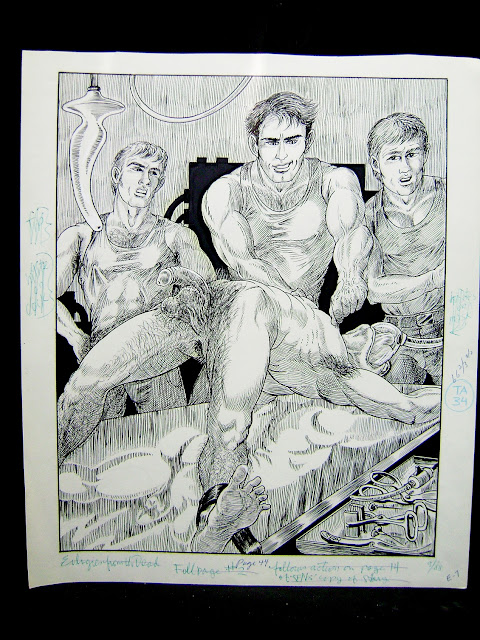 5
Most of these drawings were produced to accompany stories written by other people and without the text it's sometimes hard to be sure of their real meaning or to tell how much they reflect Sean's own personality. I haven't uncovered the real story behind this image, but it looks like a group of hunky, young workmen have stumbled over an S&M operating theatre complete with patient, ready to go. The leader's opportunist, tit-tweaking shocks his companions, (another 'innocents abroad' scenario) but the array of nasty instruments on hand and the contorted expression on the patient's face reveal the missing 'medics' to be engaged in a far blacker operation.

The cold, hygienic, metal surface of the trolley is all part of the 'scene', as intimidating to the captive as the dankest, darkest dungeon. Sean embellishes the idea by showing the victim's reflection in the shiny metal surface. It's an example of his interest in materials and textures and can be seen seen also in the clothing here and the sheets and flames in previous pictures.

Sean's not the first artist to show a captive with medical face mask (see my A-Z entry on 'Rex' for example) but by using this unusual angle he creates a uniquely powerful impression of the face being trapped within the plastic cup and despite the comic-style rendering it implies a desperately dangerous experiment. Sean's drawing style often veers between cartoonery and semi-realism in these extreme-fetish pictures so you are not sure just how serious it's meant to be. I cannot say whether this apparent 'pulling of punches' reflects publishing codes or Sean's own sensibilities. 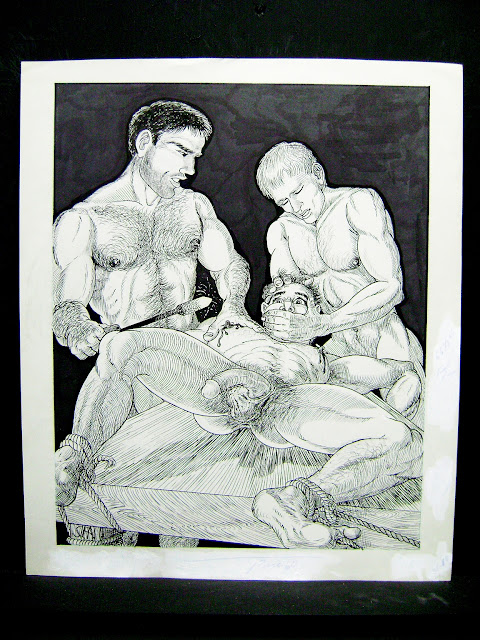 6
Time and again in Sean's fetishistic work he doesn't simply portray sexual activity, but there also seems to be an attempt to capture something more - a sense of sex as something dark and mysterious, reeking of danger. He sometimes suggests it indirectly, by showing shocked bystanders or wide eyed captives, clearly out of their depth but unable to escape from the painful intentions of knowing, calculating partners. In this image the threatened cruelty reaches out to shock us directly. Again, I don't know the underlying story - is it real threat or just a test? - but we can draw conclusions from the intimidating way Sean chose to portray it. Even the cartoon-y rendering of the struggling victim's face (again) doesn't quite dehumanise him enough to totally defuse the horror. The sadistic 'M' wielding the hot iron runs counter to stereotype, he would be a hot ticket in most gay venues while the youth of his assistant is equally surprising and hard to reconcile with the action. It's a stark and surprising contrast to the romping orgies and fun sex that characterise Sean's Meatmen comic strips and a world away from Tom of Finland's work, for example. 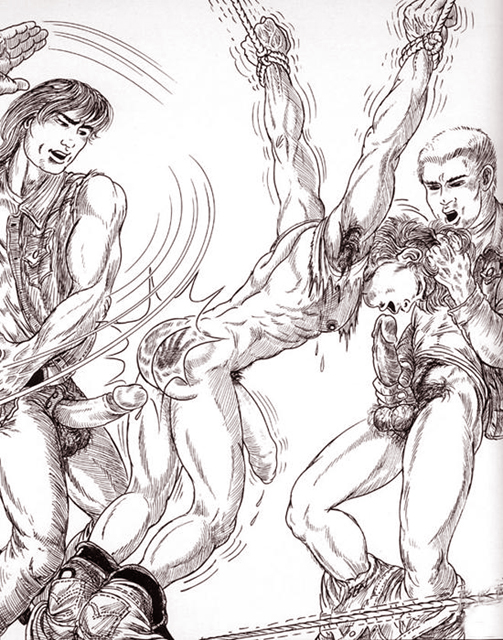 7
I could not leave Sean without a spanking picture, it's a subject that he has visited often and this picture is a good example, It comes from the comic story 'Biff' and the drawing style is typical of the slightly disappointing,'commercial' side of Sean. Somehow the figures and the faces are not quite right, there's a slight skewing effect (which is often a result of drawing with the paper angled away from the line of vision). The whole thing has a casual, cartoon-y feel. Even so, there is a tremendous sense of energy in the picture, this is one hell of a whupping and you don't need the hand marks to know it! Sean's spanking images often depict positions where landing a telling blow is physically impossible and this is no exception, but they are always energetic and fierce, so much so that you can't help thinking that the artist himself is emotionally involved in the scene. Look at the faces and you will see malice and anger and suffering pouring out of the picture. You can enjoy the erotic pleasure of revenge or pity as you will, but you might also ponder: whose anger and whose suffering is really captured here? And why does it speak to us so powerfully?

Although Sean is no longer with us, his friends have set up a website 'Sean – The Artist' and placed an archive of his work there. The sketches and annotations on familiar drawings give an interesting insight into the creative and publishing process. They also tell you a great deal about the man himself, his life and attitudes. Sean had catholic tastes (when it came to selecting subjects for images anyway) and if you are interested in the more challenging outposts of fetish and sex you will find examples here. However, I strongly advise anyone downloading the archive to check it's contents carefully and make sure that you really want to keep all the 'oddments' on your computer.

For earlier posts in this series, click on the A-Z label below
Posted by Mitchell at 20:17

Oh dear, it looks like this link doesn't work any more. :-(

It's still working for me, Mike