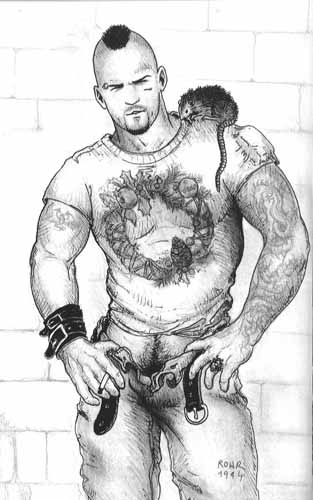 If Rőhm tests my sensitivities as a critic, Rohr pushes the boundaries too. This time we're talking mutilation and bloodshed but as my innocuous opening example shows he has an attractive and accessible style - unless you happen to have a phobia for rats. 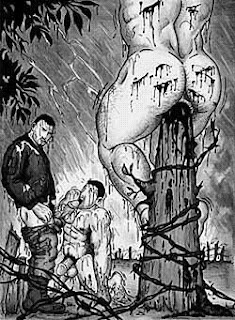 This tree trunk impalement in a bleak battleground setting is more fanciful than terminal but the barbed wire is a vicious embellishment. For me the fetish power of this picture comes not from the torture but the plight of the second prisoner, desperately grovelling in the mud to avoid a similar fate. The depiction of the storm and torrential rain isn't totally successful and is a bit hackneyed I guess, but still adds tremendous atmosphere to the picture. I am much taken with Rohr's handsome and distinctively Gallic faces. 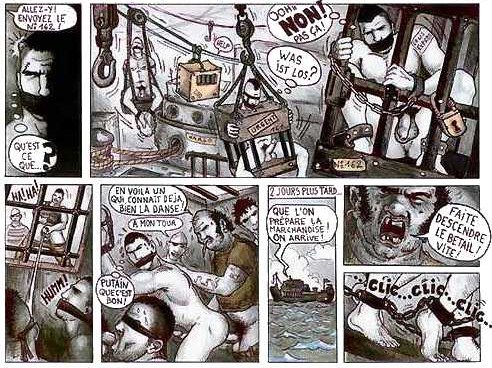 Like Riton and other artists, Rohr has produced a lengthy comic strip for 'Project X' magazine. It's entitled 'The Adventures of Marc Assain' and has a theme of abduction and enslavement in a Middle Eastern Harem. This extract compresses a number of fetish humiliation themes into just a few frames. The colloquial French language is a bit of an obstacle but it's worth trying to understand it if you can. 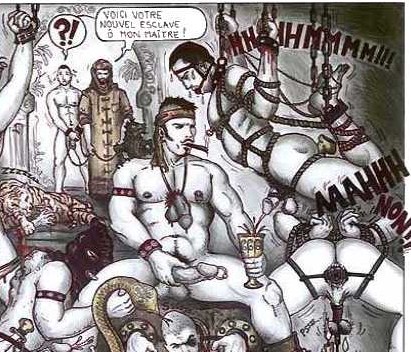 The handsome Marc and the other inmates are intended for the Sultan's highly sadistic sexual pleasure which generally seems to involve much gratuitous spilling of blood (which I have edited out in this frame). Guards who try to get a piece of Marc's ass suffer death by impalement or terrible mutilation for their error.

The comic strip format disguises the horror to a degree but Rohr avoids total cartoonery so there's still a sense of realism. What little humour he depicts is distinctly macabre and tasteless. Nevertheless, in the best traditions of Hollywood horror, it skilfully constructs an sense of genuine suspense regarding Marc's fate as he is drawn into the Sultan's web. 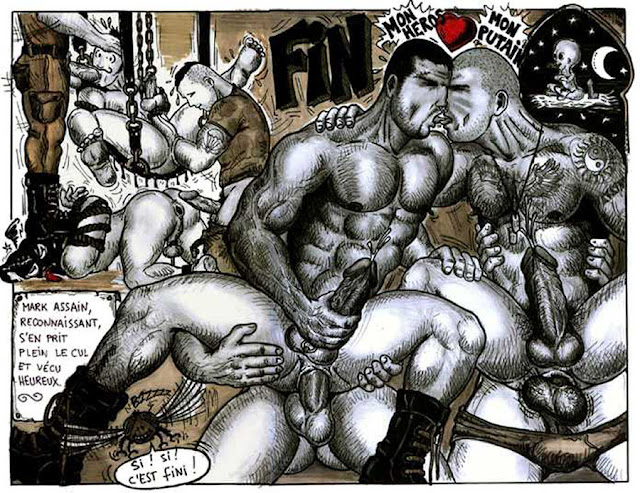 Marc is eventually rescued by a detachment of soldiers and his tormentors get their comeuppance, but it's nowhere near as terrible as they meted out to their victims. I like the beefcake sex in this picture, it's hard for hand artists to compete against the deluge of photographic imagery in this area but Rohr has created a nice, original image with a 'buddy' flavour here.

Rohr's drawing style is distinctive and appealing, if like me you dislike the blood and gore, it's still worth looking at his work for the atmosphere, psychological drama and cute French men.

I don't have a site reference for Rohr, but there's a selection at Delft boys.
I would welcome information about him from readers.
Have a look also in the GMBA2 archives for examples of his work (link in sidebar)

For other articles in this series click on the A-Z label below or use the search box to find a specific artist
Posted by Mitchell at 09:20