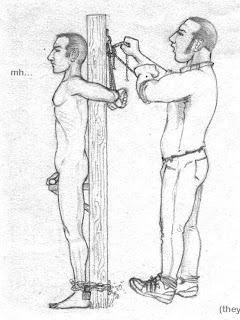 Rorc - They met after a chat
Rorc is another artist who likes to express extremes, but in this case it's pure violence which is a little easier to get to grips with, but we start with a simple bondage image. Usually, there isn't a lot of sexual interaction in Rorc's pictures, they depict power relationships and the captor often remains dressed. This man has been tricked into being stripped and tied up and in subsequent pictures he suffers painful abuse (a recurring theme). Rorc shows real bodies, with normal muscles and organ sizes, in fact the captives are usually quite skinny-looking with visible rib cages and forgettable faces (not in this example, but see also below). In contrast the the captors are bigger, sometimes overweight and often have characterful Latin faces. 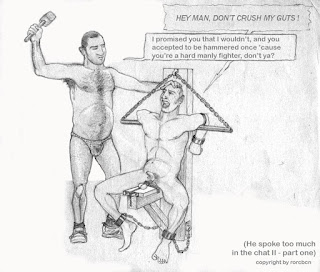 Rorc - He Spoke Too Much - 1
Rorc supplies a speech bubbles or other commentary to clarify the situation we are viewing, what has and what is about to happen. You will have noticed that his Spanish to English translations are a bit odd, but they are usually understandable and add immensely to the power of the pictures. They tell you Rorc is not just interested in the physical process of inflicting cruelty, but also in motivations and the effect of threats and fear on the victim (note his semi-aroused state in this example). In the sequel to this picture, the captive turns out to be a queer basher and Rorc depicts a violent attack on him in graphic detail, too unpleasant to show here. I empathise with the anger being expressed and don't disapprove of the statement, but for me it's not erotica. Interestingly Rorc makes the victim ejaculate but not the assailant. 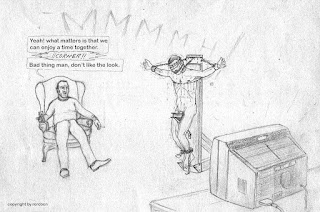 Rorc - Together
In 'together' the captive is left to stew while his captor watches TV. The barbed wire restraint is a Rorc favourite but the fun is only just beginning here. At first sight Rorc's style is crude and naïve but considerable skill is apparent if you look at the careful rendering of the TV (a tricky shape in terms of perspective) and the other furniture in the room. The man slouching in the chair is nicely captured, his casual air is somewhat reminiscent of Palanca's crazy characters but without their sex appeal. The restrained captive has believable anatomy, the skinny look is not particularly alluring to me, but the detailing of his restraints and the stand he is attached to is quite remarkable considering the small scale. However, the elements of this picture don't quite gel together, a result of positioning, stylistic variations and the absence of any background or floor. This is Rorc's style and reflects his artistic interests, fair enough, but I just think 'if only...' 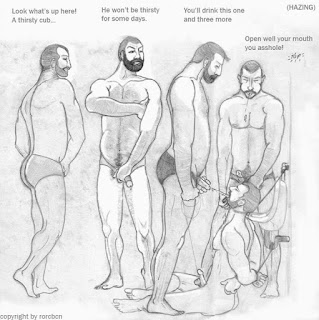 Rorc - Hazing
Hazing is more successful as a composition and illustrates Rorc's interest in piss humiliation rituals. These images tend to be more detached than his torture pictures where the agonised victim is a vociferous participant. This one may be based on a photograph and possibly be traced, it has that look about it. However, the result is original and it illustrates the essential simplicity of Rorc's style, the treatment of the beards is a fascinating simplification.