As far as I know, Nikolaas only draws one subject, men being hanged. This is a controversial fetish to say the least, although an erotic interest in asphyxiation is common as witness the regularity with which misjudged experiments claim lives significant enough to warrant press reports.
Preoccupation with the imagery is equally common amongst fetish artists. I dabble in this area myself occasionally and it figures in the work of Mike Carcel, Martin of Holland and Marc, all of whom who I featured under the letter 'M'. For me Bondageskin is the foremost exponent of this genre although his computer generated work doesn't qualify for this series.

Nikolaas's contributions depict youthful, floppy haired victims being callously despatched by prison guards or the military. Generally they are in a state of nudity and you can see that for Nikolaas, this is an important part of the ritual. His subjects are a bit too young for me but the example here is an interesting depiction of arbitrary justice. 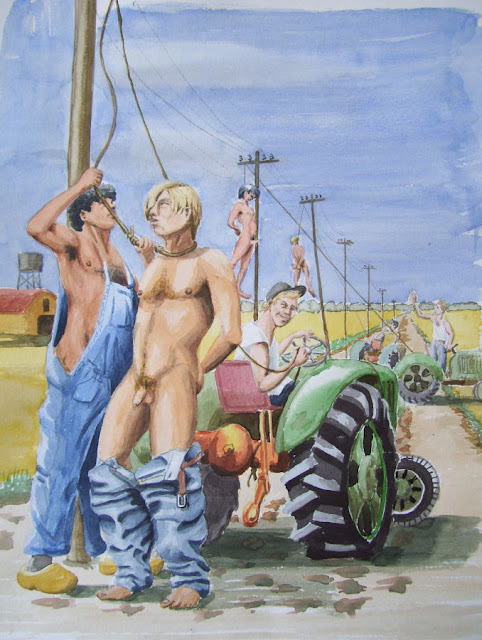 The rural setting for the drama is painted in delicate water colours and is reminiscent of the art of the mid-20th century which invoked the pastoral ideal in similar terms in order to promote food production or healthy leisure pursuits. It's a dramatically structured composition telling a chilling story. The motivations are more obscure than his prison scenes but suggest backward/backwoods prejudice and redneck country boys of the worst sort. The dramatic perspective and setting make an interesting comparison with the Highway picture by Nicolas which I featured previously.

Nikolaas posts occasionally on GMBA - see sidebar for current link
For other articles in this series click on the 'A-Z' label below
Posted by Mitchell at 09:32