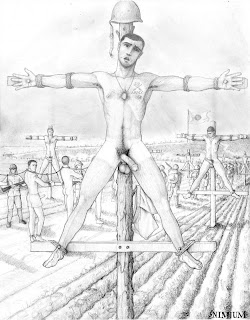 Nimium - GI's on the road to Jiang

Nimium's theme is crucufixion and he addresses it with meticulously drawn detail. One is immediately struck by the strong sense of almost geometric perspective, a stylistic feature which seems to characterise many of our 'N' artists. His subject matter is usually set in Roman/biblical times, but the sample I have chosen is a more modern story - conceived on an epic scale with crosses stretching into the far distance, snaking across the hills like the great wall of China. No doubt this imagery was inspired in part by the fate of Spartacus and his fellow rebels so there are Roman connections after all! The GI punishment theme these days has all sorts of political connotations which I won't go into, but in this context it's sympathetic, the abuse of POW's and the fear induced in their colleagues. Despite the nails the victims are supported by ropes, so this is arguably a punishment not an execution, Nimium's pictures usually underplay the cruelty of the cross. However, this is erotic fantasy so it's perfectly permissible for both victims and onlookers to be getting a kick out of it.

Nimium often draws non-stereotypical, realistic faces and his men have well toned but believable physiques which he also depicts accurately. The forward facing, photographic pose is typical and although the foreground figure is a bit stiff and almost detached from the rest of the composition, the supporting cast are rendered in a more lifelike and interesting way. The background detail is highly impressive and the sense of depth is assisted by nice pencil technique, fading out into the distance.

Nimium's work appears at the MCR Group from time to time

Roughly translated:-
It is a scene s/m ideally perfect, even if the drawings are not those that i like them, however, they are expressively exciting. The idea of the row of crucifixions, however, brilliant. One of those linked to the cross i wouldn't be able to be myself? You know that exciting would have been to remain hanging in the top, naked,with open arms and feet tied, exposed to the weather and, what is more, in outdoor? Beautiful, beautiful and beautiful!