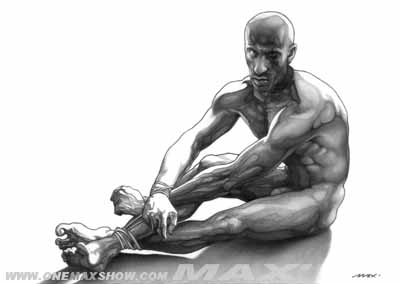 Max - Man in bondage
Max is a modern French comic artist and his work combines stylish technique and attractive imagery. His subject matter is strong on bondage and domination. This picture of a simply bound man with distinctively Gallic features is smouldering with eroticism. The images are sometimes laced with golden showers and cages but there is no leather or rubber, just nudity, sometimes set against severely geometric backgrounds constructed with tiles, stone blocks and cage bars. 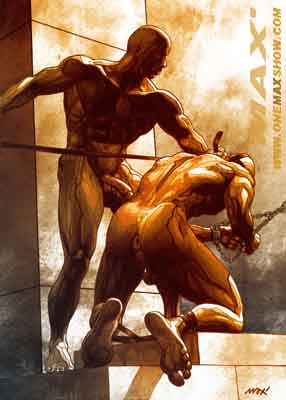 Max - Stone Steps
Max shows characters interacting in a powerful way, sometimes simply wrestling, but the more interesting images depict out-and-out domination and he uses bondage to amplify this in a way few artists do. Contrast the drama of the 'Stone Steps' picture with Matt's more typical cowboy bondage (previous post) where the captor is barely glimpsing the possibilities of his power.

Max forces his victim to kneel on a scaffold-like plinth, he uses an upward looking angle and dark shadowing to enhance the sense of the captor's threatening strength, at the same time explicitly displaying for us the captive's sexual purpose. This is more than just a crude 'in your face' visual signal, however, for the man's exaggerated anal opening is at the centre of an 'X' shape formed by the gently curving lines of his inner thighs and upper buttocks. The upper left hand arm of the 'X' flows smoothly into the arc of his captor's penis linking the two together unambiguously. The curving line of the two men's shoulders and arms has an equally satisfying shape giving the composition a coherence which shows true artistry.

Interestingly, Max claims on his website that his pictures are not gay, just about fierce men. Matt's cowboy picture from an earlier era is trying to maintain a similar distinction.
Ah! Plus ça change, plus c'est la même chose!
(The more things change, the more they stay the same!) 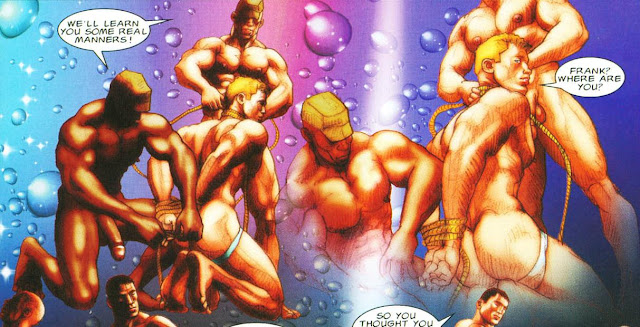 There's a simplicity of approach in Max's pictures which produces striking results. The Dream Sequence extract from 'Rainbow County' shows a man being tied up. The cap-obscured faces of his captors and a few words of dialogue create a powerful sense of subjugation, fear and foreboding. The rope wound around the victim's neck heightens the danger. This is the essence of bondage - the loss of control, the loss of defences.

In his pictures Max often plays with highlighting and employs an unusual style in which the muscle shapes and areas of light and shade are delineated by contour lines like those used on a map. In Rainbow County it creates a multi-layered effect of angled flat planes giving a sense of bodies carved from a block. In other examples, the results range from giving the appearance of camouflage or of fractured rock to a not quite human, metallic sheen on the skin. The spooky effect is enhanced by the shaven heads and futuristic settings. 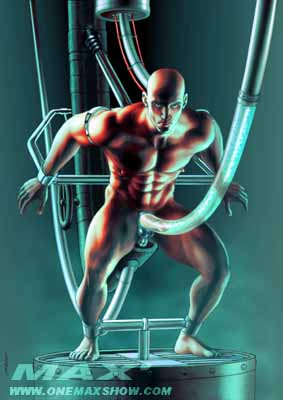 Max - Tubes
This theme develops into sci-fi world of scientific experiments with tubes and cables attached and inserted into the helpless captives. Scenes of post apocalyptic destruction are populated with men with partial bodies placed on plinths like statues or pierced by metal struts and incorporated into unidentifiable devices or ruins. It's imaginative and fascinating and I could devote a whole blog to discussing it. In the meantime I can only suggest you go and have a look at the website which has lots of pix at onemaxshow.

To see other posts in this series click A-Z in the label list below
Posted by Mitchell at 14:52