In retrospect, I wish I had filed Mike Carcel under 'C' but he always signs himself MCarcel so here he is jostling with all the other 'M's. Mike is a very prolific artist who often depicts fairly extreme and exotic subjects such as impalement, piercing, mutilation, hangings, crucifixion and even bloodier stuff which is much too extreme to show here at mitchmen. MCarcel - Pony Boy Races
Early pictures show individuals in exotic and imaginative bondage and humiliation. The 'Pony Boy Races' is a simple but imaginative take on the Pony humiliation theme and hangs on to the masculinity of the characters in a way that compares favourably with Leo's well known Pony image (see earlier mitchmen A-Z post) which is much more elaborate and camp. The bowed heads and dribbling mouths are absolutely typical of Carcel's imagery. 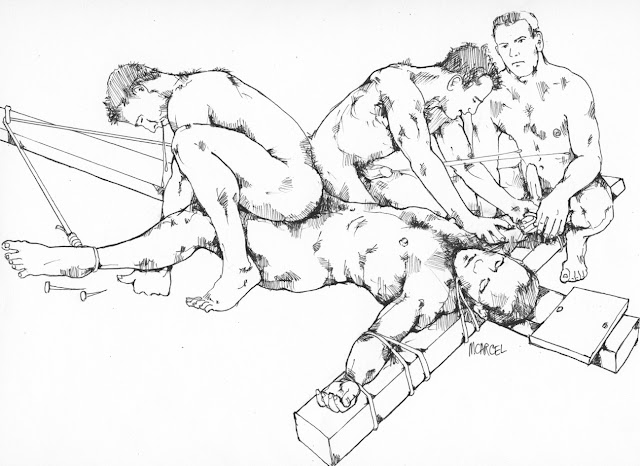 MCarcel - Nailman Busy
His later works tend to show show groups of men carrying out and undergoing much more painful and gruesome S&M activities, and I use this description (rather than tortures) because the victims appear to be consenting or at least unprotesting of their fate - extreme as it might be. In 'Nailman Busy' the crucified man is excited enough to distract his torturer from his proper job, reversing their impalement roles. This rather subtle, black humour is another of Carcel's hallmarks.

His characters are usually good-looking men with realistic, attractive bodies and (as in Nailman) they are often shown pausing in their activity to gaze out of the picture, as though posing for a camera (which I imagine reflects the source inspiration but it's obvious that the artist has made a conscious choice to keep it that way). It creates an eerie sensation of having stumbled on some incomprehensible brutal ritual with the captors proudly posing next to their handiwork happily unaware of it's true horror. You can see in this picture how Carcel composes by assembling different images together and the individual viewpoints and perspectives are actually slightly different. It doesn't seem to detract from the impact of the finished picture. 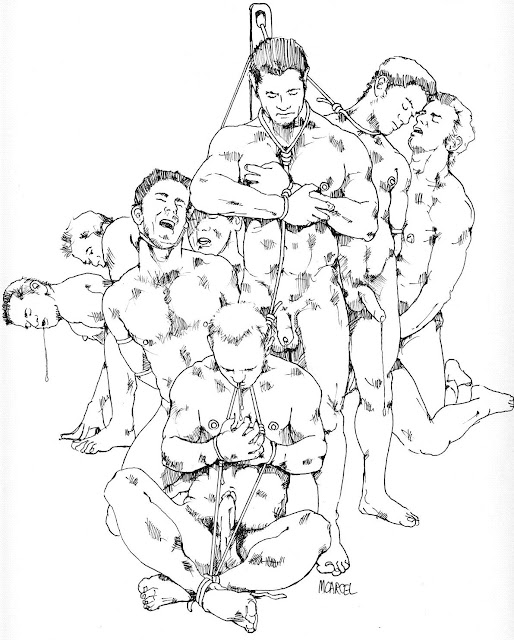 MCarcel - Slave Pen
Mike's pen and ink sketches are well drawn with close attention to the details of anatomy. He uses cross hatching rather than solid greys to depict shadows and in his later pictures this is used quite sparingly. His technique shows fine body hair particularly well but the compositions are often crowded and the absence of depth shading and background perspective can cause visual confusion at first sight. A few moments study are needed to unravel the detail.
'Slave pen' has a similar montage style to 'Nailman' but the overall fan-like composition is fascinating. The tethering together of the two foreground prisoners has an almost religious artistry about it that gives the picture interest and weight, although pious acceptance and resignation on the part of victims is normal in Mike's world. Most of Carcel's pictures contain at least one little gem of bondage like these. This detached, almost academic treatment and the use of simple outlines may explain why his pictures often seem less shocking than they should. 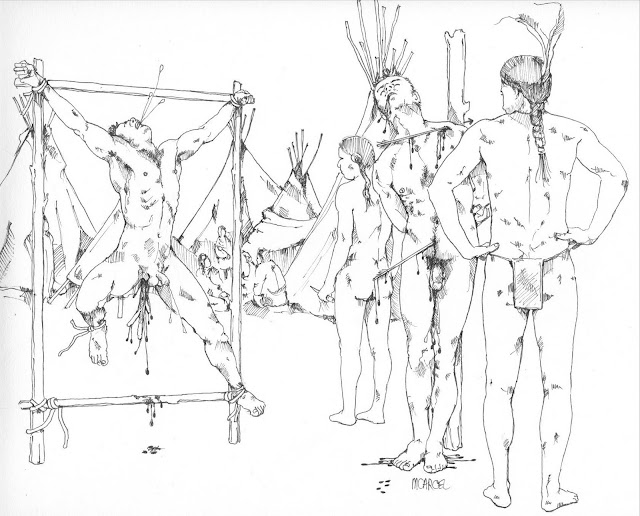 MCarcel - Michal's Mistake
His men are invariably naked and as a result there is rarely much evidence of a scenario or personal motivations, just men ceremonially torturing and executing other men. The exceptions are those pictures which show Native American Indians torturing their captives. These pictures often include details of the Indian's camp as well as their garments. The introduction of this tangible, cultural detail and it's associations certainly add to the impact and this particular scenario gives full rein to Carcel's inventiveness and cruelty - adding arrows, fire, scalping and even flaying to his armoury.

Mike inks over and then erases pencilled originals to produce his final picture and you can see that some detail gets lost in this process - around eyes for example and the knees in 'Slave Pen'. The active participants in the pictures are often shedding copious amounts of body fluids from orifices and wounds which I suspect looks more subtle in the pencilled original than the inked final version. I prefer the earlier 'Pony Boys' style but truthfully the power of his imagery transcends technique.
~
Mike has produced hundreds of pictures over the years and I wouldn't even attempt to work out a favourite or claim this to be a representative sample of his work. There were vast amounts available at the GMBA2 archives and the MCR Yahoo Group (but both these, as of 2022, are either inaccessible or defunct)

Hoever, there's another post of Mike's pictures on mitchmen blog here (added March 2013)
To see earlier posts in this mitchmen series click A-Z in the label list below
Posted by Mitchell at 14:59

I really liked your intelligent comments on Mike Carcel's pictures, and I understand better now what I like and what I don't like about them. Much appreciated.

where is GMBA group now?
It seems like it deleted.

You are correct, the current incarnation is GMBA2, link in sidebar favourites list which I will endeavour to keep up to date.

Roughly translated:-
The scene of the first photograph is one of my greatest aspirations s/m. For a long time i wish and dream with all my strength to be the property of a master capable and intelligent, and that he would be the treaty, finally, as a pony, and remain naked, barefoot and harnessed just as it is a horse; to be, finally, tied to a wagon that i would be forced to tow to the sound of lashes. That is good, i am young and, therefore, i have the time, but i am in a hurry!

But congratulations for your interesting work